7 HISTORICAL FIGURES WHO WERE ADOPTED 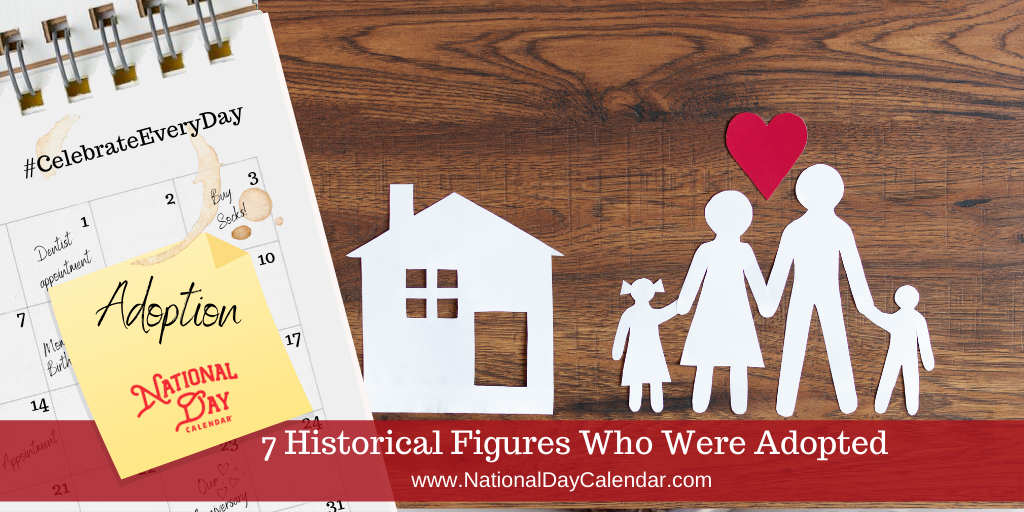 7 HISTORICAL FIGURES WHO WERE ADOPTED

7 Historical Figures Who Were Adopted – Orphans have been taken in by loving families for hundreds of years. Despite this fact, the first adoption laws in the United States weren’t passed until 1851. These laws recognized adoption as a social and legal process based on the welfare of the child. For most children, adoption has played an essential role in their life. Some adopted children even went on to become important figures in history.

Discover more about these 7 historical figures who were adopted.

Eleanor Roosevelt was the highly revered wife of the only four-term president in the country, Franklin D. Roosevelt. Eleanor served as First Lady from 1933 to 1945. Due to her human rights achievements, President Harry S. Truman referred to her as “First Lady of the World.” After losing both of her parents by the age of 10, Eleanor Roosevelt was raised by her grandmother.

John Hancock was the president of the Second Continental Congress. Hancock is best known as a signer of the Declaration of Independence in 1776. His father was a Congregationalist minister who died when John was 7. Because his mother had other children to care for, his uncle Thomas Hancock adopted John.

Nelson Mandela was a philanthropist and political leader who led the revolution against apartheid in South Africa. Mandela was the country’s first black head of state. He was born into a royal family of the Thembu tribe. His father served as chief. Mandela’s father died when he was nine years old. His mother, who was one of four wives to his father, had several other children. After his father’s death, a high-ranking Thembu regent named Jongintaba Dalindyebo adopted Mandela.

Edgar Allen Poe is considered one of the most influential American writers of the 19th century. He is also known as the first author to make a living as a professional writer. Much of his work was inspired by the events he experienced. Both of his parents died in 1811, making him an orphan before the age of 3. John Allen, a tobacco merchant from Virginia, adopted young Edgar.

Nancy Reagan was the 2nd wife of President Ronald Reagan. Besides serving as First Lady, Nancy Reagan is best known for her anti-drug campaign, “Just Say No.” Nancy was born in 1921. Upon her parents’ divorce in 1928, she lived with an aunt and uncle in Maryland. Her mother remarried in 1929, and Nancy returned to live with her mother. When Nancy was 14-years-old, her mother’s husband, a neurosurgeon named Loyal Davis, adopted her.

Bill Clinton served as the governor of Arkansas. He was also the 42nd President of the United States. Some of his key accomplishments as president included job creation, low unemployment, raised education standards, and having the most diverse cabinet in American history. His father had died in an auto accident before he was born. Bill Clinton’s grandmother helped to raise him. He was later adopted by his stepdad, Roger Clinton, whom his mother had married in 1950 when Bill was four years old.

Known as both a visionary and genius, Steve Jobs founded Apple Inc. in 1976. It’s hard to know what our world would be like without Jobs. He was born in 1955 to Joanne Carole Schieble. Joanne became pregnant at 22 years of age. During her pregnancy, the unwed mother decided to give her baby up for adoption. After Joanne gave birth to her baby, her obstetrician worked with her to find suitable adoptive parents. Those adoptive parents were Paul and Clara Jobs.