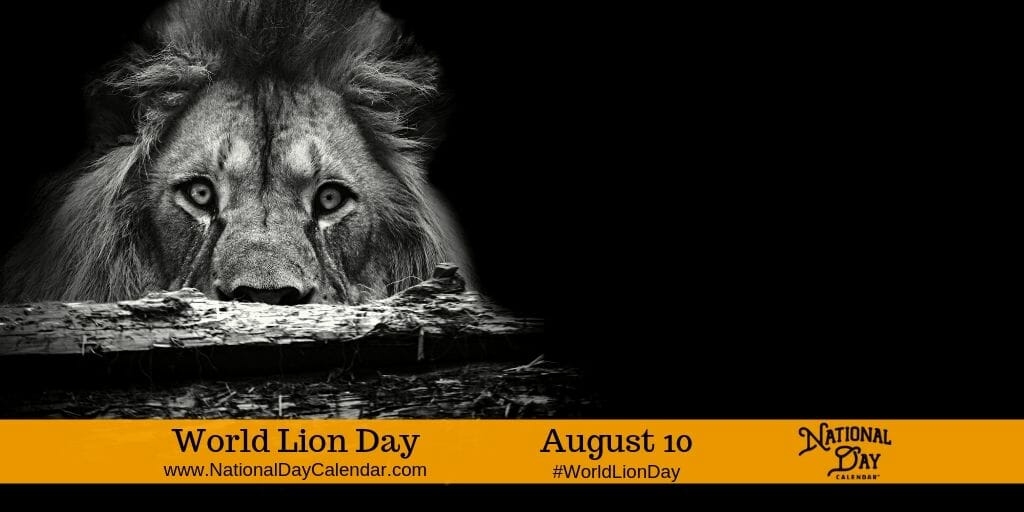 Today, we invite you to celebrate one of the most majestic species to walk the earth. It’s World Lion Day!  Each year on August 10, lion lover’s around the globe use this day to bring awareness to the declining population of lions. Furthermore, we suggest learning about ways to help the preservation of lion habitats, as well.

The lion species, also known as Panthera leo, is one of the largest species on earth. Typically weighing 300 to 550 pounds, the lion can vary from a light buff color to a deep reddish brown color.  Surprisingly, there is also the rare white lion found in the wild. Easily recognized by it’s thick mane, the lion is also muscular and has a loud, deafening roar.  Unfortunately, as majestic lions my seem, they are slowly disappearing.

As far back as 3 million years ago, lions roamed freely across Africa, Asia, Europe and the Middle East .  Today, loins are live freely in their natural habitat in only two locations, Africa and Asia.  In addition, some lions are bread in captivity.

Lions are listed as a vulnerable species according to the International Union for Conservation of Nature’s (IUCN) Red List of Threatened Species. Though they are not under the classification of an endangered species, they still face obstacles that endanger their survival.

Currently, there are about 30,000 to 100,000 lions left on earth.  In the past few decades, lion populations have decreased almost by half.  Trophy hunting and loss of natural habitat are the primary reasons for the diminishing lion population.

Volunteering at a local zoo that houses lions is a great way to learn more about the care required to protect lions.  Volunteering  or making a donation to a conservation group is another way to show support for the good work organizations do. Whatever you do, don’t forget to share your day’s celebration on social media using #WorldLionDay.

In 2013, co-founders Dereck and Beverly Joubert of Big Cat Initiative and National Geographic began a partnership to form World Lion Day.  Also known as the National Geographic Big Cats Initiative, the partnership aims to protect these wild cats in their natural habitat. Furthermore, the initiative also works on safety measures with communities that live near wild cats.