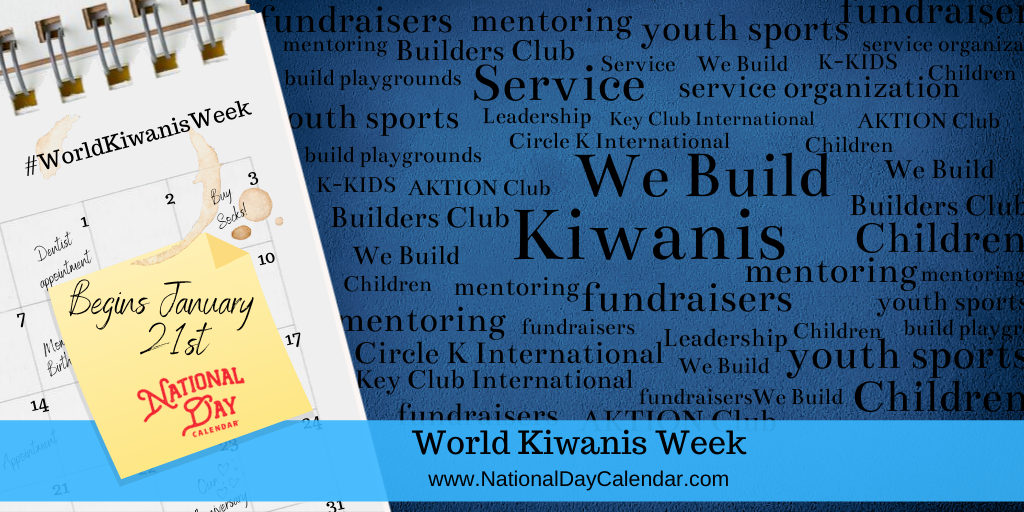 Each year on January 21st, Kiwanis kicks off a weeklong anniversary celebration of the service club’s first official meeting. The celebration goes from January 21-26.

Most people have probably heard about a club called Kiwanis. However, they might not know precisely what the club does. Kiwanis is an international service club. Every year, these clubs host several service projects.

Most of these service projects center around children. The service projects ensure that children have what they need to be secure and successful in their community. Examples of Kiwanis service projects include building playgrounds, mentoring teens, and sponsoring youth sports. Kiwanis also partners with other organizations to eradicate poverty and disease.

To encourage participation for the younger generation, Kiwanis is broken down into these clubs:

The best way to observe the week is to find a local Kiwanis International Club in your community. Sign your kids up to participate in one of their clubs. If you don’t have a Kiwanis Club, you can still donate to the organization. Volunteer with a different organization in your community that helps children. Search the Internet to find out more about the history of Kiwanis and what they do.

Don’t forget to share on social media with #WorldKiwanisWeek

The first official meeting of the Kiwanis took place on January 21, 1915, in Detroit, Mi. At the time, the organization called itself the Supreme Lodge Benevolent Order Brothers. The club was formed as a way for business people to improve their communities. In 1920, Kiwanis adopted the slogan, “We build.” In 1922, Kiwanis convened across the border in Toronto. By that time, the organization had grown to over 802 clubs with over 68,000 members.

Today, Kiwanis is a global community of clubs. They are now primarily known for helping children. Their current motto is “Serving the Children of the World.” There are over 555,000 members in 80 countries. Kiwanis is headquartered in Indianapolis, IN, and hosts nearly 150,000 service projects a year.