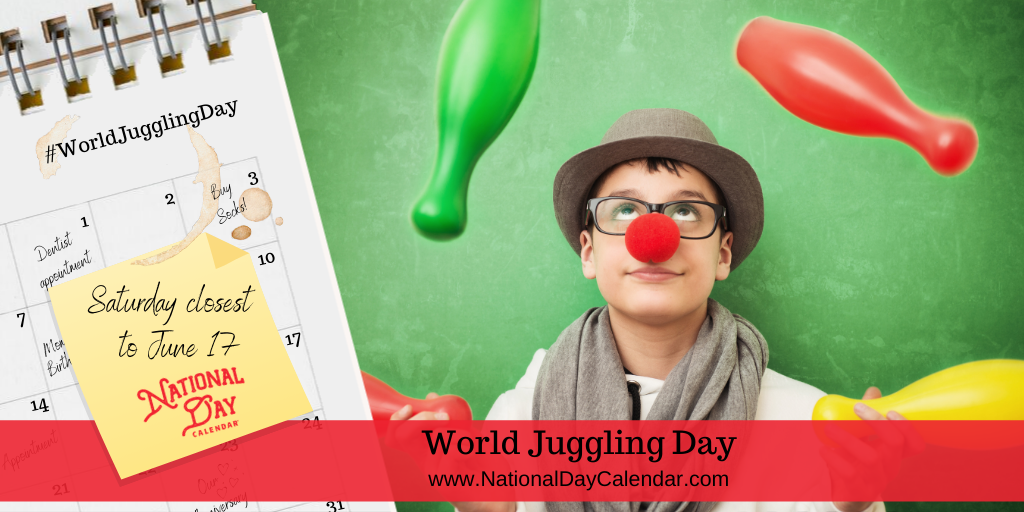 Every year on the Saturday closest to June 17th, World Juggling Day encourages jugglers to unite and celebrate the joy of juggling. The day also encourages people to learn how to juggle.

Do you know how to juggle? It’s ok if you can’t because a majority of people can’t either. Estimates suggest only about 21 percent of the general public can juggle. If you want to learn, experts recommend starting with scarves. It’s best to start with two scarves then graduate to three. If you don’t have scarves, you can juggle plastic bags from the grocery store. Once you’ve mastered scarves, then you can move on to balls, rings, or beanbags. Many expert jugglers also use knives, flaming torches, and even chainsaws.

As you’re learning to juggle, you might wonder where this activity came from. Historians believe juggling dates back to 2000 BC in ancient Egypt. Juggling can also be traced back to the Aztec Empire of Mexico. Juggling also probably existed in Greek and Roman cultures. During the Middle Ages, jugglers were sometimes thought to be witches. During the Renaissance Period, juggling became a way to please kings and queens.

Jugglers also entertained common folk throughout Europe. In fact, the word juggler comes from the word “jogelen,” which means to entertain. In 1793 juggling came to the United States with the circus. Vaudeville performances included jugglers as well. Throughout the years, juggling has maintained its popularity for both amateurs and professionals.

On this day, juggling events are held in backyards, parks, and community halls all around the world. Many people also host picnics and barbecues in conjunction with their juggling events. To participate:

Share this fun day on social media with #WorldJugglingDay.