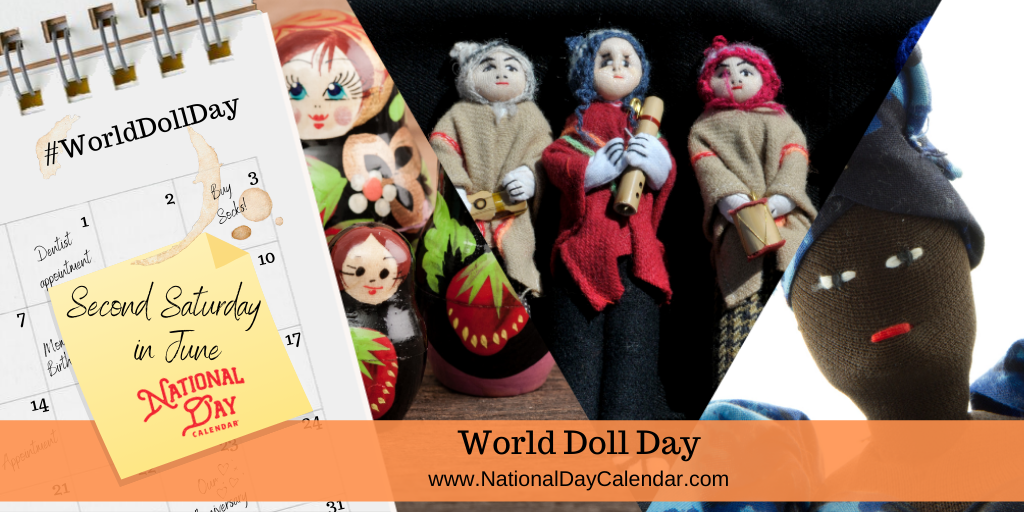 Every year on the second Saturday in June, World Doll Day celebrates the idea of a doll delivering a universal message of love and happiness. The day also encourages you to give someone a doll, especially to a child that does not have one.

It seems that people have loved dolls since nearly the beginning of time. Archeologists found the oldest dolls in Egyptian tombs from 2000BC, they didn’t clearly determine what they were used for. While children likely played with dolls as toys dating back to 200 BC, not all dolls were playthings. Some cultures believed that dolls possessed magical powers.

Throughout the years, dolls have mostly been made from wood. However, dollmakers use other materials as well. For example, the Inuit make dolls from soapstone and bone. These dolls are dressed in fur. Other materials used to make dolls include dried apples, corn husks, clay, and stone. Porcelain is an especially popular material for doll heads.

Other kinds of dolls include:

Another type of doll that has become extremely popular is the customizable doll. These dolls can be designed to look like a child. Customization often includes facial expressions, complexions, eye color, and hairstyles.

On this day, libraries, museums, and other organizations create doll exhibits. Doll collectors hold special events and put their dolls on display. Stores that sell dolls have special sales and doll giveaways. People are also encouraged to give a doll to someone. Many give dolls to those in need or those who don’t have a doll. This is also a good day to learn about the history of dolls and the different kinds of dolls throughout the world.

Share a picture of your favorite doll on social media with #WorldDollDay.