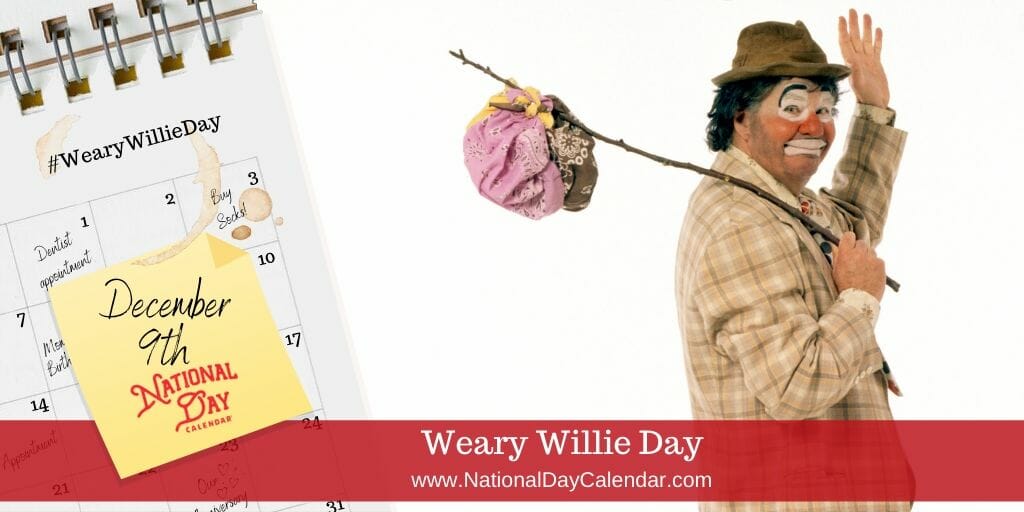 Weary Willie Day on December 9th recognizes the art of clowning and the impact it has on our lives. This holiday was named for the character made famous by Emmett Kelly, who was born on this day in 1898.

Weary Willie was a unique character in the art of clowning. Kelly had developed Weary Willy at a time when the white-faced, goofy clown was the norm, and selling the idea for a sad, down-on-his-luck clown did not fit the formula most circuses were seeking. For the time being, Kelly put back on the white face and the brightly colored costume.

Times and attitudes changed when the country was in the depths of the Great Depression. Downtrodden and world-weary was the face of the nation.  People could identify with Weary Willie like never before. Weary Willie, his frowning, whisker-shadowed face, and his dirty, torn and worn costume, went on to become an American icon.

His son, Emmett Kelly, Jr. carried on Weary Willie’s persona well into the modern era until his death in 2003, at the age of 83.

Wear some big shoes, pantomime or grab a bunch of people and pile into a tiny car.  Clown college could be just around the corner! While clowning around, stock up on a Pair of our Crazy Socks to entertain folks! Learn more about Weary Willy. Read Clown: My Life in Tatters and Smiles by Emmett Kelly or Emmett Kelly: The Greatest Clown on Earth by Donald McManus. Watch The Clown starring Henry Fonda as Emmett Kelly. Another film about clowns is Grease Paint. The documentary follows a family of clowns for a year. You can find it on Amazon.

Q. Who were some famous clowns?
A. Through the generations many clowns gained notoriety. Some names include:

Q. Is a mime a clown?
A. While a clown wears face paint and sometimes elicits laughter, their art form is not considered a comic style. However, clowning is comedic in more ways than one. From their colorful and oversized costumes to slapstick style, clowning is its own style of performance.

Q. What is a rodeo clown called?
A. There are three types of rodeo clowns. Each has an important role to play during the rodeo.

December 9th Celebrated (And Not So Celebrated) History

Upon being sworn in as the governor of Louisiana, P.B.S. Pinchback became the first African American to serve as a governor of a U.S. state. He had previously served the state as its lieutenant governor, duties he had assumed when Lieutenant Governor Oscar Dunn died while in office. Then, Pinchback replaced Governor Henry C. Warmoth when his term ended due to impeachment charges.

The U.S. Patent Office issued patent No. 308,990 to Levant M. Richardson of the Richardson Skate Company in Chicago, IL, for his ball-bearing roller skates.

Jay Berwanger of the University of Chicago becomes the first recipient of the Downtown Athletic Club Trophy. In 1936, the trophy was renamed the Heisman Trophy after coach John W. Heisman.

December 9th Celebrated (And Not So Celebrated) Birthdays

In 1924, the businessman and innovator helped found General Seafoods Company. He later developed a quick-freezing method for preserving foods that revolutionized the frozen food industry.

The Chicago artist is best known for her cover art on the pulp magazine Weird Tales.

The United States Navy rear admiral was a pioneer in computer programming and one of the first programmers of the Harvard Mark I computer.

The critically acclaimed photographer earned a Guggenheim fellowship in 1952.

Born John Elroy Sanford, the comedian and actor starred in the NBC sitcom Sanford and Son in the 1970s.

The award-winning actor is best known for his roles on stage and screen in Dangerous Liaisons, Red, and The Killing Fields.