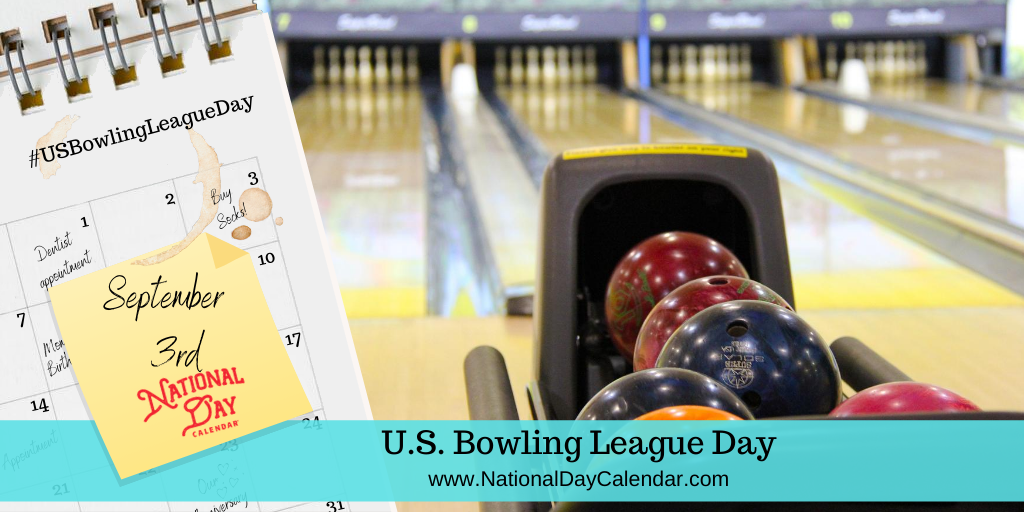 Primarily an outdoor sport until around 1840, the game was called ninepins and was popular with gamblers. To snuff out the gambling, the state of Connecticut banned the game in 1841. As a result, indoor lane owners added one pin to their alleys to circumvent the law.

The term “turkey” describes when a bowler successfully throws three strikes in a row. Before the lanes became as slick and beautiful as they are today, getting consecutive strikes was difficult. Around the late 1800s, at Thanksgiving time, alleys and clubs would offer turkeys to players who bowled three strikes in a row. As the holiday neared, taking home a prize turkey after a fun night of bowling would sure top off the evening. It seems this may be the source of the term for achieving three strikes in the game.

When is National Sports Day?

In one particularly rousing account from the 30th of November 1894, The Standard Union out of Brooklyn, New York, suggested that the Lobster Bowling Club could have been mistaken for a “college football game” they had made such a ruckus. The two teams celebrated so much during their turkey contest that it carried into the street. In the wee hours of the morning, two teammates carried the turkey dangling from a pole up the street as they all sang. The story never reported who won the turkey.

Today, leagues of men, women and mixed teams of all ages play in bowling competitions around the world. Weekly league bowling provides a fun time as well as great physical activity.

Gather your league and go bowling. If you are not a member of a league, just invite some friends. Let us know if you get a turkey. Use #USBowlingLeagueDay to post on social media.

Our research was unable to find the creator and origin of U.S. Bowling League Day.

Q. What other terms do bowlers use to describe strikes?
A. While many of the terms surround holiday food like turkey and ham, not all of them do. For example, 5 consecutive strikes might be called a Yatzee, hambone, brat, front string (for 5 consecutive strikes at the beginning of the game), sombrero or high ball.

Q. Is bowling in decline?
A. It depends on where you look. While league and alley numbers are declining, the sport is always evolving. Bowling alleys that keep pace with trends and the demands of their community continue to survive and thrive. And yet, more than 67 million people bowl in the United States every year according to bowl.com.

September 3rd Celebrated (and not so celebrated) History

Author, abolitionist, and orator Frederick Douglas escapes from slavery. He fled Baltimore to freedom in Philadelphia. Douglas would write about his journey to freedom in the book My Escape from Slavery.

John Brallier accepts $10 and expenses from David Berry of the Latrobe YMCA to play football. While other football players had contracts, Brallier is the first to openly go professional.

Over 16,000 fans witness the Philadelphia Giants win the International League championship and the Freihofer Cup. Members of one of the earliest professional Black baseball leagues defeated the Cuban X-Giants in a two-game contest for the honors. In the first game, the final score was 3 to 1 cinched Philadephia’s win. However, in a second exhibition game, the Philadelphia players proved their abilities once again with a 4 to 1 win. The exciting game was a nail-biter with great saves in bases full situations.

President Lyndon B. Johnson signs the Wilderness Act into law. The law paved the way for the conservation and preservation of wilderness areas across the country through the National Wilderness Preservation System.

In a country where 90 percent of the drivers owned left driver-side cars, Sweden switches to driving on the right side of the road. The change required the reconfiguration of turning lanes, signs and more.

Viking II lands on the Mars surface 6 weeks after its counterpart space orbiter, Viking I, made its landing.

September 3rd Celebrated (and not so celebrated) Birthdays

In 1833, the Quaker abolitionist and educator opened one of the first schools for Black girls. Located in Connecticut, the legislature that same year passed a Black Law making it illegal for Crandall to run a school for Black students. She was even arrested and convicted of breaking the law. However, a higher court overturned the decision. Even so, Crandall was forced to close the school in 1934.

The businessman served as a United States Senator from California. He is also the father of William Randolph Hearst.

Architect Louis Sullivan gained recognition for his work in the late 1800s for his skyscraper designs. He along with Dankmar Adler are known for the Auditorium Building in Chicago, the Wainwright building in St. Louis, among others.

The inventor and scientist is responsible for making live radio broadcasting possible.

As a physicist, his discovery of the positron earned him the 1936 Nobel Prize in Physics.

Maynor pursued a career in music and became an internationally renowned concert soprano. A woman of many firsts, on January 20, 1949, she sang at Harry S. Truman’s presidential inauguration on January 20, 1949. Her performance was the first by an African American at a U.S. presidential inauguration. Among her many accomplishments, she is also the founder of the Harlem School of Arts.

The American journalist and war correspondent covered three wars during her career. In 1951, she won The Pulitzer Prize for her “fine front line reporting showing enterprise and courage.”

The comic strip artist is best known for his comic strip characters. He created Beatle Bailey in 1950. Then in 1954 he teamed up with Dik Browne and created Hi and Lois.

The founder of Taco Bell opened his first restaurant in 1954. The first Bell’s Drive-In and Taco Tia was located in San Bernardino. Then in 1962, Bell opens the first Taco Bell. The business grew and by 1970 the franchise went public.

The sports broadcaster was one of the first hosts of The Wide World of Sports. The show aired on ABC from 1961-1998.

Gladwell is a staff writer for The New Yorker. He is also the author of several books including What the Dog Saw and Talking to Strangers.

As an accomplished snowboarder and skateboarder, White holds more X-Games and Olympic gold medals than any other snowboarder.