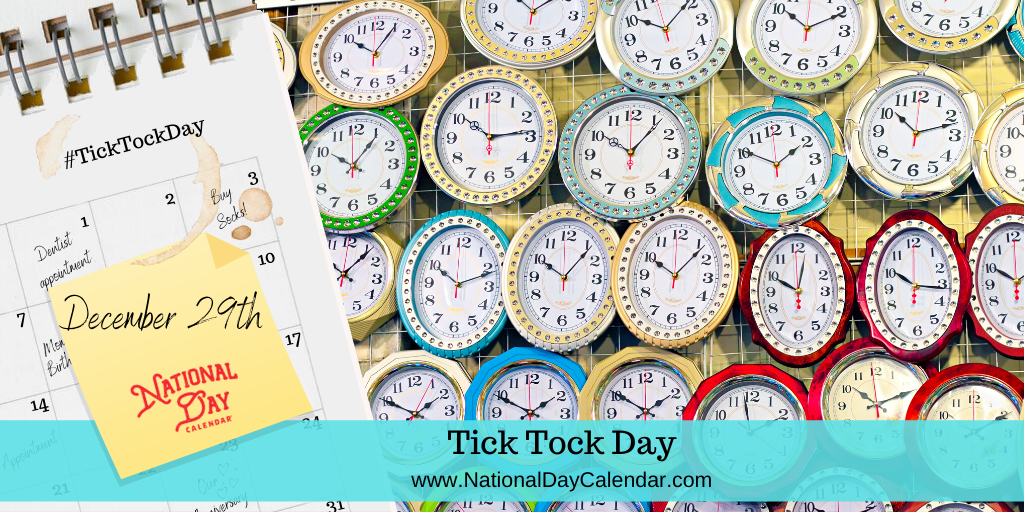 Tick Tock Day, observed annually on December 29th, reminds us to complete any unfinished business that might need addressing before the end of the year.

As the end of the year approaches, many items call for our attention. Unfinished business usually needs to be wrapped up before the end of the calendar year. Things like larger business purchases and charitable donations for the tax year may need to be transacted before December 31st.

Another thing to consider is your medical plan. Does your deductible start over? Do you have a Flexible Savings Account with funds to use? Some employers offer annual benefits that will be lost if they aren’t used by the end of the year. Time is running out.

Tick Tock Day may also be a day to look at personal goals. Did you finish reading that book? Bucket lists call our names. Where do we want to travel? We may still need to explore some exotic foods, too. Maybe your goals are grander or simpler. Whatever they are, tick-tock.

No matter how chose to wrap up unfinished business, be sure to use #TickTockDay to post on social media.

December 29th Celebrated (and Not So Celebrated) History

Retired sea captain Thomas Valentine Sullivan establishes the first Young Men’s Christian Association (YMCA) in Boston, MA. He modeled the organization after the YMCA created by George Williams of London, England. Sullivan opened the Boston YMCA in the Old South Church where it was operated with the assistance of volunteers.

The ragtime tune “The Entertainer” by the classically trained musician Scott Joplin is registered with the U.S. copyright office. Two other songs were also registered. They were A Breeze from Alabama” and “Elite Syncopations.”

Sonotone began selling the first hearing aid with a transistor.

December 29th Celebrated (and Not So Celebrated) Birthdays

On June 15, 1844, the U.S. Patent Office issued patent No. 3633 to Goodyear for his process for vulcanized rubber. The chemist spent years of experimentation studying rubber until Goodyear developed a rubber that withstood the elements.

Johnson served as President Abraham Lincoln’s second Vice President. Following the President’s assassination, the southern Democrat from Tennessee swore the oath of office and became the 17th President of the United States. Even though his home state had seceded, Johnson remained in Washington and loyal to the Union. However, during his term as president, tensions over reconstruction grew. Following Johnson’s veto of the Tenure of Office Act, Congress brought articles of impeachment against Johnson. He was the first U.S. president to be impeached.

In 1908, the explorer, naturalist, and paleontological collector founded the University of California Museum of Paleontology and the Museum of Vertebrate Zoology.

Mitchell’s military experience in the Army Signal Corps led to numerous achievements. While the aviator is considered the “Father of the United States Air Force,” Mitchell’s forthright opinions earned him a career-ending court-martial before he ever saw the fulfillment of a separate Air Force.

The American actress is best known for her roles in the sitcoms The Dick Van Dyke Show and The Mary Tyler Moore Show.

Some of the actor’s most notable roles include Sam Malone in Cheers, Jack Holden in Three Men and A Baby, and Michael in The Good Place.