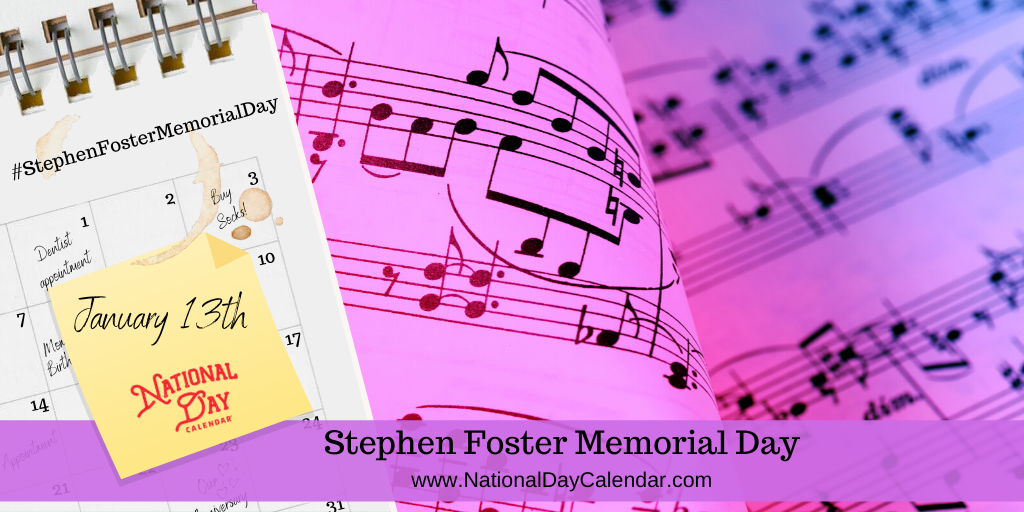 Despite Foster’s exclusive music contract with Firth, Pond, and Company, he was penniless when he died at the age of 37. While his songs were wildly popular, the lack of copyright protection and alcoholism left him with nothing of value to show for his work.

Read about the life of Stephen Foster or watch a documentary. Listen to some of his music. You might be surprised to learn how familiar some of it is. How many of them do you already know? Check out our suggestions below:

Q. Are Stephen Foster’s songs in the public domain?
A. Yes. Though Foster sold the rights to his songs in 1857 to his publishers, today, Foster’s songs may be performed, recorded, or published without permission.

January 13th Celebrated (and Not So Celebrated) History

Decades of invention and experiments from contributors around the globe culminated into a single moment at the Metropolitan Opera House. Inventor Lee Deforest powered up the transmitter and antenna and began the world’s first public radio broadcast, a performance of Enrico Caruso. While the audience was small, it demonstrated the potential of public broadcasting.

German test pilot Helmut Schenk successfully deploys the first ejection seat while being towed aloft in his HE280 by two Bf 110C tugs. During heavy snow, the jet iced up and Schenk found he had no control of the plane. He jettisoned the towline and ejected from the plane.

President Lyndon B. Johnson establishes the Department of Housing and Urban Development. He appoints Robert C. Weaver as the secretary of the new department, the first African American to hold a Cabinet position.

Barbara Sonntag of Colorado set the American speed crocheting record of 4,412 stitches in 30 minutes. That comes to roughly 147 stitches every minute.

January 13th Celebrated (and Not So Celebrated) Birthdays

One of the most popular American authors in the decades following the Civil War, his stories followed the familiar rags to riches theme.

In 1906, Alfred Fuller founded the Fuller Brush Company and grew it into a household name for cleaning supplies.

During World War II, Zlatin and her husband rescued children from intern camps and eventually established a home for refugees. However, in 1944, Klaus Barbie and Nazi soldiers captured all 44 children and adults who lived and worked there except Zlatin and killed them. During a war crimes trial in 1987, Zlatin testified against Barbie.

The American screenwriter and producer is best known for the television medical drama Grey’s Anatomy. Her other notable works include Scandal, Private Practice, and The Princess Diaries.