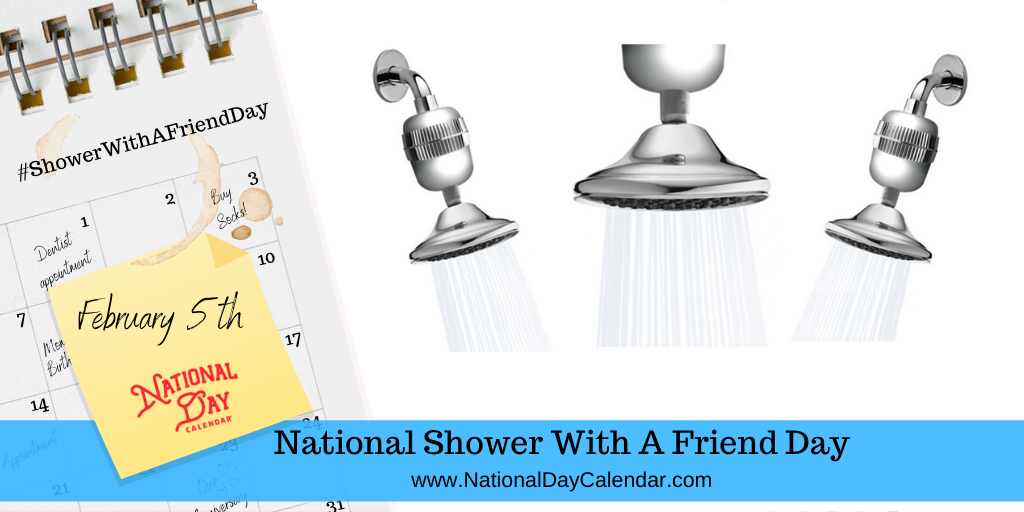 NATIONAL SHOWER WITH A FRIEND DAY

On National Shower with a Friend Day on February 5th is a tongue-in-cheek way of educating people about the benefits of filtered, chlorine-free water.

Winter is the coldest and loneliest season of the year. With dwindling daylight and Valentine’s Day at its heart, February can often leave people feeling dejected and somber. The day injects a bit of humor into the season while also serving to educate people on the benefits of showering in fresh, filtered water (and the effects of chlorine).

Learn more about how chlorine is harmful to shower or bathe in or consume.

Shower with filtered water. Learn more about the harmful effects of chlorine and how to filter it. Use #ShowerWithAFriendDay to post on social media.

New Wave Enviro, a company located in Denver, Colorado, submitted the day in 2014.

The Registrar at National Day Calendar proclaimed the day in 2015 to be observed on February 5th, annually.

February 5th Celebrated (and Not So Celebrated) History

The U.S. Patent Office issued the first U.S. patent for starting blocks to George T. Bresnahan of Iowa City, Iowa. The patent for a “Foot Support” under patent no. 1,701,026 was designed by the university coach, the invention was meant to provide a firm foothold on the running track and improve the athlete’s “get-away” at the start of a race.

Dick Purcell stars in the premiere of the first installment of Captain America. The film is the first Marvel character to appear in theaters.

February 5th Celebrated (and Not So Celebrated) History

The inventor is most noted for developing the first commercially successful pneumatic tire.

The right fielder played 34 seasons in Major League Baseball, primarily with the Milwaukee Braves/Brewers. He began his professional career in the Negro American League in 1951 before the Braves purchased his contract a few months later.

The NASA astronaut flew two missions including the 1989 STS-30 in which she deployed the Magellan Venus exploration spacecraft.