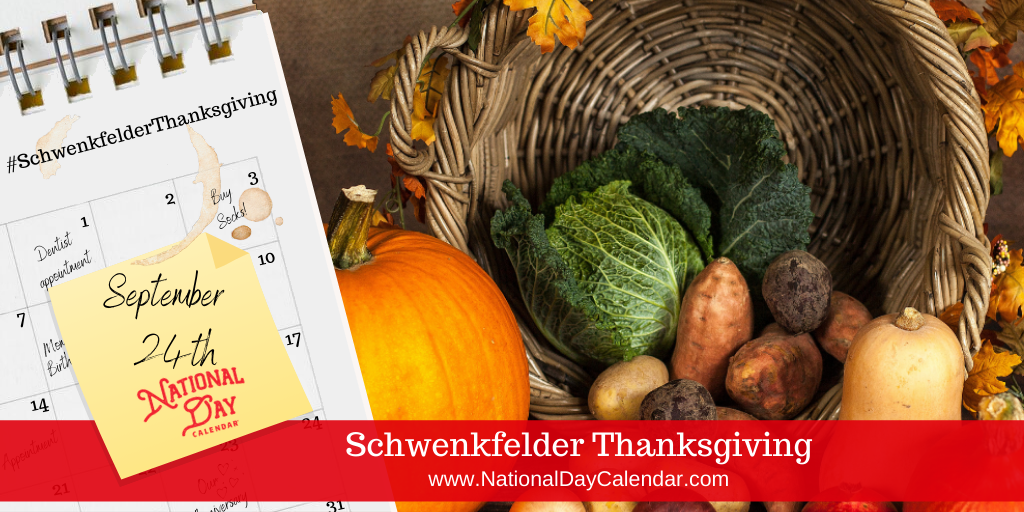 On September 24th Schwenkfelder Thanksgiving expresses thanks in a way that dates back to 1734.

The Schwenkfelders are the descendants of a small Protestant sect that sprang up in Germany around the time of the Reformation. They were followers of Caspar Schwenkfeld, a theologian. He and his followers separated from Protestant circles and formed the brotherhoods that still survive as the Schwenkfelder Church. Most Schwenkfelders now live in Pennsylvania Dutch country.

Cook up a Thanksgiving spread. Celebrate with your garden bounty and the fruits of your labors. Create new traditions to carry forward generation after generation. Give thanks for the blessings and rewards in your life. Use #SchwenkfelderThanksgiving to post on social media.

In 1733, a handful of Schwenkfelder’s followers arrived in Philadelphia. A second group came from Germany on September 22, 1734. They swore their allegiance to the British king; then they spent September 24th expressing their thankfulness to God for having delivered them from persecution.

While the Pilgrims held their first Thanksgiving feast in 1621, the observance didn’t continue uninterrupted. Days of fasting and thanksgiving on an annual or occasional basis became common practice in other New England settlements. George Washington even proclaimed the Nation’s first Thanksgiving in 1789. And while his successors followed suit, designating days of thanks, they weren’t consistent. It wasn’t until 1863 that Abraham Lincoln proclaimed a national Thanksgiving for the last Thursday in November. Annually, the country gave thanks on that day until 1939. That year, Franklin D. Roosevelt moved the observance to the fourth Thursday, and that’s where it stayed.

September 24th Celebrated (And Not So Celebrated) History

The perpendicular rock formation known as Devil’s Tower is named the first national monument in the United States. The Antiquities Act passed in June of the same year paved the way for President Theodore Roosevelt to begin declaring national monuments. Throughout his term as president, he would declare 17 more national monuments.

The French Sardine Company of California trademarks its canned fish products under the name Star-Kist.

The Brooklyn Dodgers play their last game at Ebbets Field. After their 2-0 win of the Pittsburgh Pirates, the team moved to Los Angeles where they still play today.

The news show 60 Minutes premieres on CBS. The program was promoted as a news magazine and was hosted by Harry Reasoner and Mike Wallace, but there was no ticking clock in the background.

The Big Dibber rollercoaster at Blackpool Pleasure Beach in Lancashire, UK sets a world record. That day, the average age of the 32 passengers equaled 75.25, the highest average age ever reported for riders on a rollercoaster.

September 24th Celebrated (And Not So Celebrated) Birthdays

The prominent abolitionist and suffragist became the first African American to publish a short story. She worked closely with influential activists such as George Still and Frederick Douglass to promote anti-slavery campaigns and pursue equal rights.

If you know a business is open because of the glowing sign in the window, you can thank Georges Claude. The engineer and chemist is noted for inventing the neon light.

The accomplished tennis player was At the age of 15, Dod became the youngest winner of the Wimbledon Ladies’ Singles Championship.

The American businessman founded the Mars company in 1911. Today the company includes a diverse range of products.

The Chinese American filmmaker made her mark in the cinema when she produced the first American film for a Chinese audience. She also traveled to Hong Kong and began producing films there. In 1941, she directed the film Golden Gate Girl which was also the film debut for actor Bruce Lee. His character was the newborn baby girl.

At the age of 27, Amonette became the first woman executive vice president of IBM.

The ninth astronaut to walk on the moon flew six spaceflights, the first person to reach the achievement. As an accomplished pilot, he also flew four different types of spacecraft throughout his missions.

The puppeteer and filmmaker is best known for his characters known as Muppets. They appear in shows such as Sesame Street, Fraggle Rock, and The Muppets franchise.

The three-time Olympic gymnast took gold in the Olympic all-around in 2004.