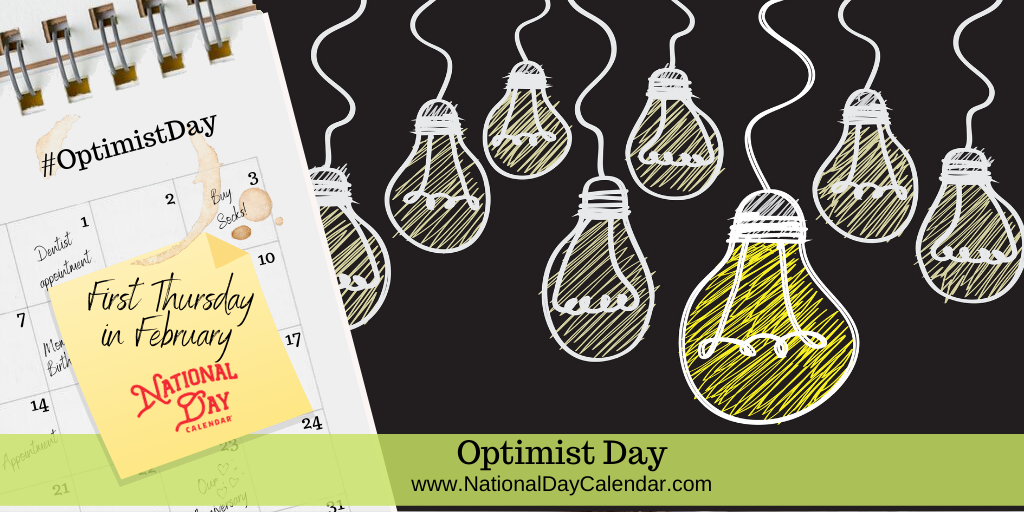 Confident people look to the future with hope, and on Optimist Day we celebrate the volunteers who share their enthusiasm, skills, and talent to make that tomorrow a vibrant and peaceful one. On the first Thursday in February, recognize an optimist whose endeavors have made a difference in your community.

Each year, Optimist organizations around the world volunteer their time and skills working with the youth in their communities. They provide leadership, scholarship, wellness and safety, arts and sports programs.

Optimist Day recognizes the volunteers and the youth who support their communities in many different ways. Every day, our growing communities rely on the ingenuity and energy of the next generation to be an integral part of our neighborhoods, schools, and towns. These young volunteers and the mentors who guide them connect them to the greater world around us. Their stewardship creates a hopeful future for us all.

Recognize the volunteers in your community. Dedicate the day to their accomplishments and let them know how much you appreciate them. Let them know your community admires their hard work and dedication. Encourage other youth to become involved in community organizations, too. Help them see the benefits of improving the world where they live and connecting with the people who live there. Share the projects and resources of your communities’ volunteer organizations, the volunteers, and youth, too. Use #OptimistDay on social media.

The original idea for Optimist Day developed in 1909 when the Optimist Club of America promoted the day to be observed on April 1st as a way to encourage kind acts and further optimism. The idea was to also replace the practical joking associated with April Fool’s Day. For the next several decades, clubs across the country hosted Optimist Day observances in their communities on various dates throughout the year.

In 2017, Optimist International declared Optimist Day to be observed on the first Thursday in February with a focus on recognizing the achievements of the volunteers and the youth in the community. Each year, the programs they support improve their communities and provide opportunities for youth of all ages. They also coordinate with other volunteer organizations making the future brighter for all involved.