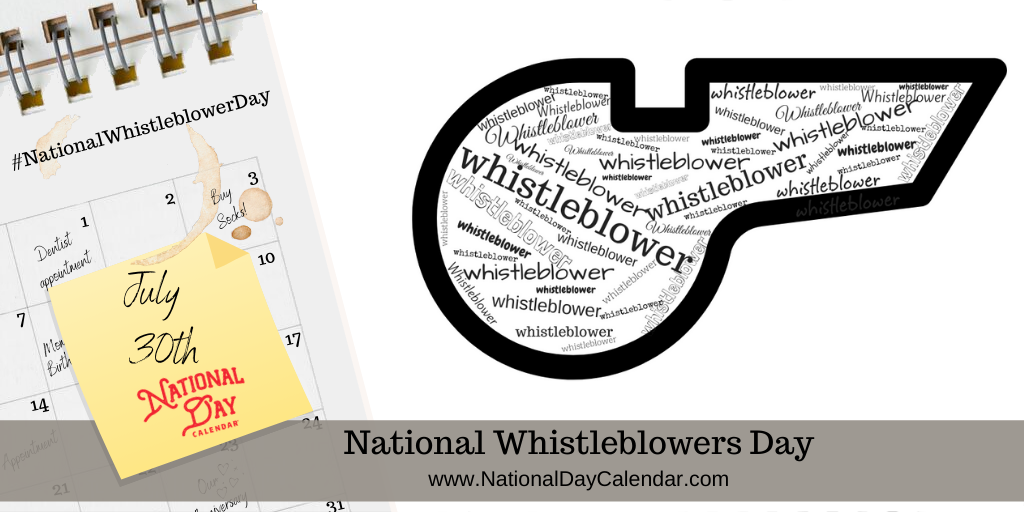 National Whistleblowers Day on July 30th commemorates the day our Founding Fathers recognized the need to protect those who report corruption when they see it. The day reminds us to honor and support the people who speak up about fraud, abuse, or waste.

A whistleblower is an individual who reports suspicious activity. These activities include violations, exploitation, misrepresentations, or other infractions. The activity may be within an organization, either public or private. Notably, the history of whistleblowers is long and often trying. While legislation now protects whistleblowers from retaliation by their employers (see Gravitt below), they still carry a heavy burden. Usually, once they have filed a report, legal battles follow.

The day commemorates events put into motion by Lieutenant Richard Marven and midshipman Samuel Shaw in 1777. Considered the first whistleblowers in the United States, Marven and Shaw served in the Continental Navy. The two men, along with eight other sailors, reported abuses against British prisoners by Commodore Esek Hopkins. As a result of the sailors’ reports, the Continental Congress enacted the world’s first law protecting whistleblowers.

One of the most notable whistleblowers in the United States government was Mark Felt. Known for years as Deep Throat, he was crucial to helping Washington Post reporters Bob Woodard and Carl Bernstein bring to light the Watergate scandal. From 1972 to 1974, they investigated wiretapping and theft connected to President Richard Nixon’s reelection campaign.

However, the government is not the only place these crimes take place. From banking and big business to non-profits, whistleblowers report activity to help stop it. Some organizations promote the day with special events such as the National Whistleblower Center. Other noted whistleblowers include:

Potentially, anyone working in the private sector, local or federal government can file a claim. If they see suspicious activity causing fraud, abuse, or waste, their report ultimately protects consumers, taxpayers, and the general public.

Learn more about those who report fraud, waste, and abuse. Discover the protections in place for them, too. Review your company or organization’s ethics policies. Read about or watch documentaries on the subject of whistleblowers. We found a few for you to review:

National Whistleblower Day commemorates July 30th, 1778, the day the Continental Congress passed a historic and unanimous resolution. The resolution honored ten sailors and marines who spoke out against their commander’s abuses of his office. In doing so, the Founding Fathers declared it was the duty of all Americans, “to give the earliest information to Congress or other proper authority of any misconduct, frauds, or misdemeanors.” In modern terms, it is an American necessity to report corruption when they suspect it. The United States Senate first recognized National Whistleblower Day in 2013.