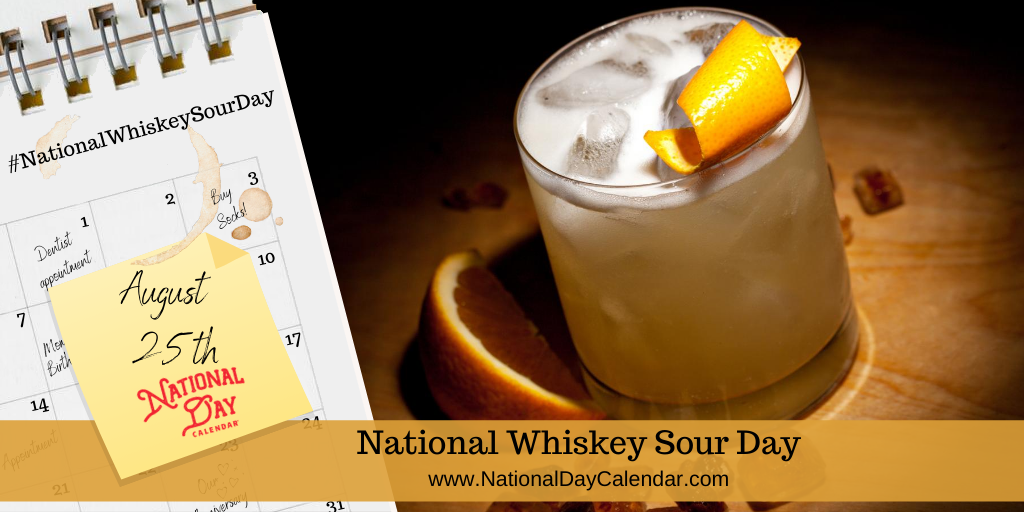 Traditionally garnished with half an orange and a maraschino cherry, a whiskey sour is a mixed drink containing whiskey (often bourbon), lemon juice, and sugar. Whiskey sours are shaken then either served straight or over ice.

“Too much of anything is bad, but too much good whiskey is barely enough.” – Mark Twain

Alternatives to the traditional whiskey sour are the Boston sour and the Ward 8. The Boston sour adds a dash of egg white to the recipe. The Ward 8 uses either a Bourbon or rye whiskey base with both lemon and orange juices and grenadine syrup added for sweetness.

The first mention of a whiskey sour was in an 1870 Wisconsin newspaper.

Celebrate by enjoying a whiskey sour! Invite a friend to join you. Don’t hesitate to try a twist on the whiskey sour. While you enjoy your cocktail, explore the history of whiskey, its production, and trade. We recommend:

(Remember always to drink responsibly and never drink and drive.) Use #NationalWhiskeySourDay to post on social media.

Within our research, we were unable to find the creator or the origin of this popular National Day.

Q. What kind of glass do you use to serve a whiskey sour?
A. A whiskey sour can be served in a rocks glass, highball, a stemmed glass.

Q. Can I make a sour from other spirits?
A. Yes. Vodka, gin, rum, tequila, pisco, and brandy are all used to make sour cocktails.

Q. What’s in a tequila sour?
A. Tequila, lemon and lime juice, simple syrup, bitters, and egg white (optional). Did you know, the margarita and Paloma also fall into the sour cocktails category?

August 25th Celebrated (and Not So Celebrated) History

The first patent for preserving food in tin cans is issued to Peter Durand. The merchant would later sell the English patent No. 3372 to Bryan Donkin and John Hall.

Addressing the issue of proper field seeding, Joseph Gibbons patents a grain drill that regulated the amount of seed sown in a single row.

Captain Matthew Web swims across the English Channel unassisted. His accomplishment is the first swim recorded swim across the channel from England to France.

The bacteriologist identified the organism responsible for the bubonic plague.

At the 1920 Olympics in Antwerp, Ethelda Bleibtrey becomes the first woman to win gold in swimming.

From sea to shining sea, Amelia Earhart becomes the first woman to fly across the North American content solo.

GE registers copyright for the jingle “We Bring Good Things To Life.”

NASA’s Voyager 1 enters interstellar space, making it the first spacecraft to venture beyond the power of the solar winds.

August 25th Celebrated (and Not So Celebrated) Birthdays

The former deputy sheriff of Cook County in Chicago is best known for establishing one of the country’s most famous private detective agencies, the Pinkerton National Detective Agency.

The inventor and toymaker co-founded the Lionel Corporation and developed the first Lionel model train for the company.

English author of such works as The Shoreless Sea and One Fine Day, Panter-Downes was also a columnist for The New Yorker.

The artist is best known for her surrealist painting and sculpture.

Kelly worked for Walt Disney Studios as an animator, but he also created the comic strip Pogo.

The first actor to play the role of James Bond in the Bond films, Connery has appeared in over 90 films including The Hunt for Red October, Indiana Jones and The Last Crusade, and the host of the Untouchables.

The perennial talk show host also hosted Who Wants to Be a Millionaire and made several cameos in film and television.

Filmmaker, Tim Burton, is known for creating dark and wonderous films and animation.

Ian Falconer wrote and illustrated the Olivia books and television show for children.

The syndicated celebrity chef is known for lifestyle and cooking programs and her cookbooks and product line.

The country music artist has a string of number 1 hits, including “Bring on the Rain.”