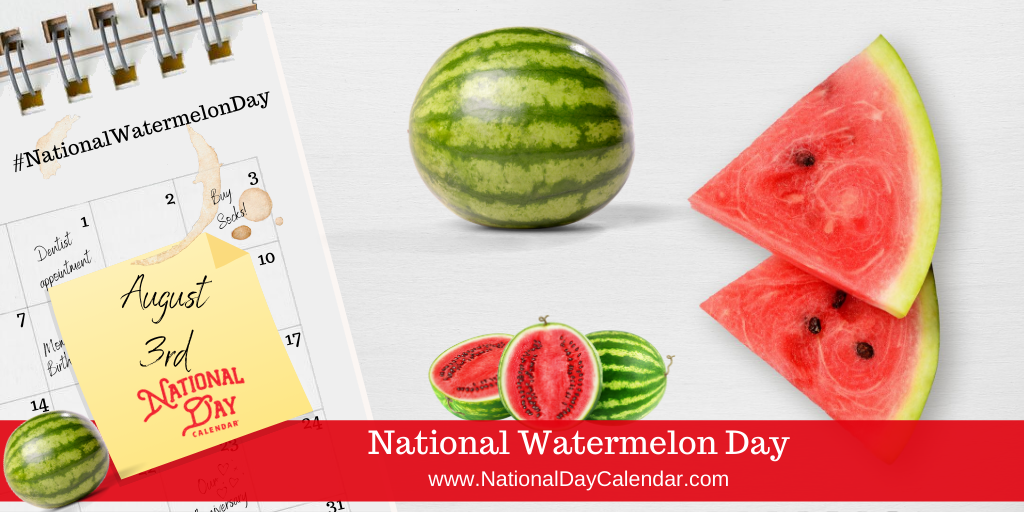 National Watermelon Day on August 3 recognizes the refreshing summertime treat enjoyed at picnics and fairs!  And since watermelon is 92% water, it is very satisfying in the summer heat.

This vine-like flowering plant originated from southern Africa. While the word watermelon refers to both the fruit and the plant to botanists, the plant is a pepo. The pepo is a berry with a thick rind and fleshy center. Interestingly, pepos develop from an inferior ovary. They are also characteristic of the Cucurbitaceae, a scientific term for the gourd family.

While the watermelon fruit is loosely considered a type of melon, unlike other melons, it’s not in the genus Cucumis. The smooth exterior usually produces a dark green rind with stripes or yellow spots. Watermelons produce a juicy, sweet interior flesh ranging from deep red to pink. However, sometimes it comes in orange, yellow, or white.

While melon holds plentiful water, wild melons tasted bland and bitter. This clue suggests that desert dwellers likely cultivated the first melon. The seeds and art found in the tombs of Pharoh’s supply additional clues to the watermelon’s value. tombs of Pharaohs. Over time, cultivation and breeding brought out the better qualities of the sweet and tender fruit we enjoy today.

With proper growing conditions, watermelons grow to enormous sizes. Around the world, competitions award prizes each year for the largest one. The Guinness Book of World Records states that the heaviest watermelon weighed 262 pounds. To learn more refreshing watermelon facts, check out www.watermelon.org.

While you are celebrating the day, spread the joy! Visit a pick your own watermelon patch or pick one up from your local farmer’s market. Then, slice it up and invite the neighborhood over to share. Make a fruit salad or cut it into wedges. What are your favorite watermelon memories? Try these other fun ways to celebrate the day, too!

What recipes will you be trying? Post on social media using #NationalWatermelonDay.

Parents and educators, check out more ways to #CelebrateEveryDay by visiting the National Day Calendar Classroom!

While our research did not uncover the creator and origin of National Watermelon Day, we do offer you many more ways to celebrate fresh fruits and veggies.

Check out these delicious celebrations: