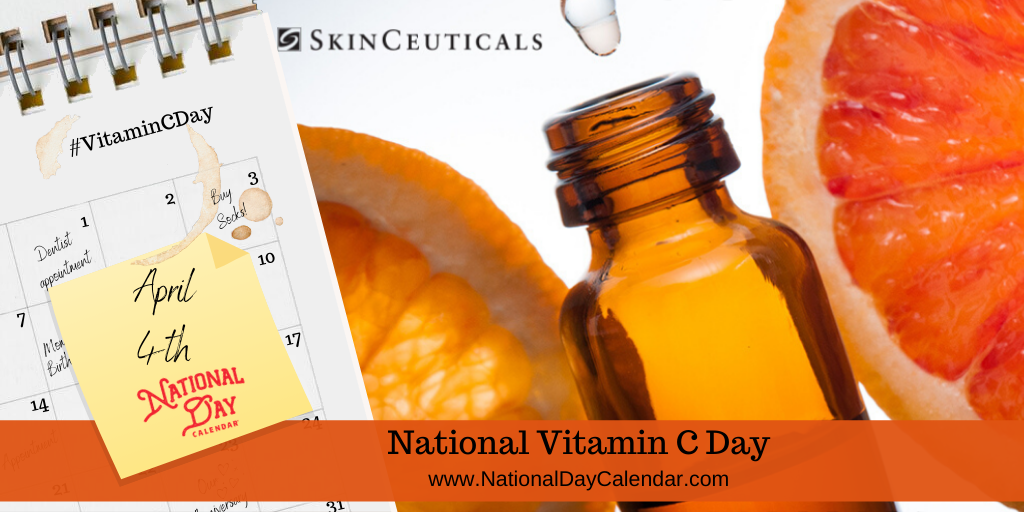 National Vitamin C Day on April 4th each year shares all the ways vitamin C nurtures and benefits our health, inside and out!

While Vitamin C is widely recognized for warding off colds, the vitamin is also clinically proven to be a powerhouse in other areas of health, too. For example, Vitamin C may reduce blood pressure and potentially lower the risk of heart disease. Those at risk of gout can lower that risk by increasing their intake of Vitamin C.

With the right product, adding Vitamin C to your beauty regimen can brighten your skin, reduce inflammation, and promote healthy collagen production. Vitamin C brightens just about any health routine.

Learn more about why vitamin C is essential for skin health – find the right vitamin C serum for you. Share your experiences using vitamin C in your daily regime. How has it benefited you?

SkinCeuticals founded National Vitamin C Day in 2019 to celebrate this research and the proven benefits of vitamin C.

The research of Dr. Sheldon Pinnell, founding scientist of SkinCeuticals, established the parameters for effective vitamin C antioxidant delivery to the skin, allowing SkinCeuticals to pioneer the emergence of cosmeceuticals.

The Registrar at National Day Calendar proclaimed the day to be observed on April 4th annually.

April 4th Celebrated (and Not So Celebrated) History

President William Henry Harrison dies 31 days into office and becomes the first president to die in office. He was also the shortest service president. The 9th president’s death also ushered in the first vice president to succeed a president due to death – Harrison’s running mate John Tyler.

The people of Argonia, Kansas, elected Susanna Salter as their mayor. Her name was placed on the ballot as a prank against the opposition, but it backfired. Salter was the first woman elected as mayor in the United States and had more than just a little understanding of politics. She was also a member of the Women’s Christian Temperance Union and set into practice her teetotaler ways. That same year, she also gave birth to a son.

The nutritionist Charles Glen King isolates vitamin C while conducting a study at the University of Pittsburgh. Though Hungarian biochemist Szent-Gyorgyi earned a Nobel Prize in 1937 for isolating the vitamin first, many believe King deserves recognition for his work.

April 4th Celebrated (and Not So Celebrated) Birthdays

Throughout her career, Dorothea Dix advocated for improved conditions for the mentally ill and expanding public hospital care. She lobbied extensively for reform, taught and published several textbooks, fiction, and poetry.

During her career with the Fred Harvey Company, the American architect designed several landmark buildings for the National Park Service at the Grand Canyon. Since Colter drew much of her inspiration from the landscape, projects like the Hermits Rest and Desert View Watchtower compliment the area surrounding them.

The once shy teenager became a household name after opening a chain of dance schools. In 1925, Murray opened his first dance studio with his wife Kathryn. By 1938, the Arthur Murray Dance Studio franchise was soon teaching students of all ages.

Born McKinley Morganfield, the influential blues artist brought an electric sound to the music scene. Though slow to take off, when it did, Muddy Waters’ earned international recognition and numerous awards, including six Grammys during his lifetime.

Gil Hodges’ professional baseball career was interrupted by the bombing of Pearl Harbor. At the time he had signed with the Brooklyn Dodgers. For the duration of the war, he served in the U.S. Navy. Afterward, he returned to the home of the Dodgers to take up first base and go on to be a major hitter for the team.

Poet laureate Maya Angelou is recognized for poetry and her memoir I Know Why the Caged Bird Sings. She earned numerous awards including the Presidential Medal of Freedom and three Grammy Awards for Best Spoken Word Album. Among her many other talents, the best-selling author was also a screenwriter and civil rights activist.

Considered part of the Brat Pack of the 1980s, the American actor returned to the film industry in the 2000s after facing addiction issues. The results have been blockbuster Marvel series and stellar performances in movies such as Soloist, Dr. Doolittle and Sherlock Holmes.