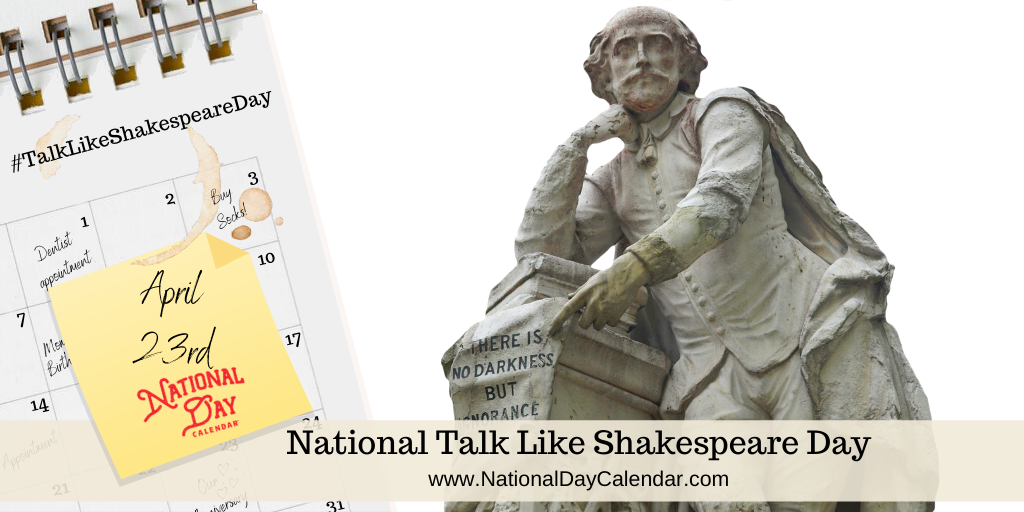 On April 23rd each year, National Talk Like Shakespeare Day encourages us to speak like the Bard and the characters in his plays.

William Shakespeare (April 1564-April 23, 1616) is the author of some of the world’s most celebrated plays and poems. In 2016, we honored the 400th anniversary of the Bard’s death. What better way to celebrate his life and art than to speak like the poet and playwright.

We can speak like Shakespeare by substituting thou, thee, and ye for you and they. Rhyming couplets and creative insults were his particular favorites. Many of the phrases we use today we owe to Shakespeare too.

We could make you wait with bated breath for the list. We could send you on a wild goose chase to find them. For goodness sake, you might just be the laughing stock if we did!

Oh, come now. No need to fight fire with fire. Come what may we will give you the naked truth and teach you to talk like Shakespeare. We’ll snatch you out of the jaws of death and put you in a pickle too while we are at it!

What makes your hair stand on end? Did we set your teeth on edge? Well, what’s done is done.

You may be such a sorry sight, but still, the world is your oyster even if you wear your heart on your sleeve. Aye, you have seen better days! We must send you packing. It’s all Greek to you anyway!

The day also coincides with English Language Day which began in 2010 as a cultural recognition day by the United Nations.