September 22 focuses on raising awareness and sharing education about all 50 states and their capitals on National States and Capitals Day.

As children, we learn about the 50 states and their capitals in the U.S. But as we get older, we tend to forget those important cities and their role in crafting policy and influencing the economy. And, while everybody knows their own state capital, many do not even remember the capital of the state next door. Today, let’s take the time to remind ourselves how important every state and capital is to our nation.

Learning about States and Capitals

Remember those paper maps we were given to learn about states and capitals? Our worksheet had blank states with star indicating where the capital was supposed to be. The agony of naming each state and capital was definitely stressful! We spent time memorizing names, where the state was and naming each capital. Not to mention spelling everything correctly. Some of us were lucky to have a teacher that would play a game to help us remember.

Typically, we learn about states and capitals between the grades 3-6, starting with the state we live in. From there, we learn our country has 50 states and 50 capitals within each state. All 50 capitals have a unique history, which means there are 50 reasons why a specific city or town was chosen to be a state capital. In addition, we eventually learn how governments operate and the vital roll each state plays in our national government.

Are state capitals found in the largest cities of each states? No. The first state capitals were built according the where the majority of the population lived in a state, or near a main access hub. For example, North Dakota is home of National Day Calendar. Our state capital is Bismarck, but was once the capital of the Dakota Territory. The Northern Pacific Railroad was built to transfer goods from eastern U.S. to the west, making Bismarck the prime location for state government. Bismarck became the official state capital only after the territory was split into 2 states–North and South Dakota.

LEARN YOUR STATES AND CAPITALS

BEHIND NATIONAL STATES AND CAPITALS DAY

Dick & Jane Educational Snacks receives credit for the idea to celebrate National States and Capitals Day on September 22. Not only does it raise awareness about the importance of knowing all 50 states and capitals, it reminds people to have fun while learning. 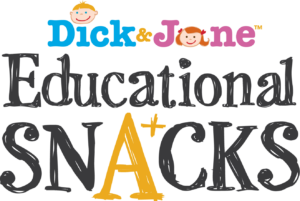 Owners Dick & Jane (yes, those are their real names), have a passion for education. With a mission to bring a fun way for kids to enjoy learning, they set out to help kids enjoy learning through creating a business of healthy snacks that also serve as learning tools. Primarily geared for students K-8, their snacks can be used as a teaching tool to learn about: