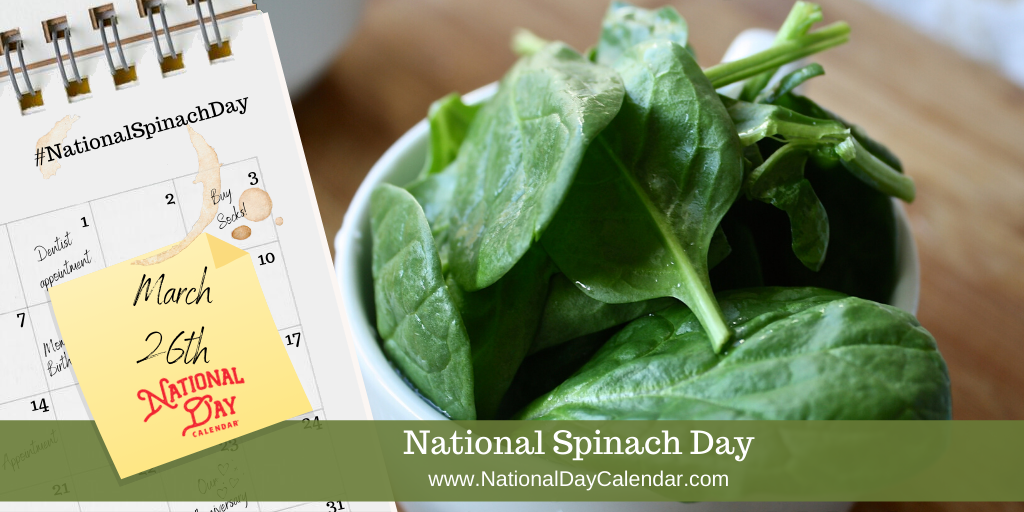 On March 26th each year, National Spinach Day reminds us of the health benefits packed into this leafy green vegetable. Not only are there so many delicious ways that you can enjoy spinach, but it is also incredibly good for you!

An annual plant, spinach grows natively in central and southwestern Asia. Thought to have originated in ancient Persia, Arab traders carried spinach into India and later introduced it into ancient China. There it was known as “Persian vegetable.” The earliest available record of the spinach plant was found in a Chinese document. It noted that the spinach plant was introduced into China via Nepal.

During her reign as queen of France, Catherine de Medici enjoyed spinach so much that she ate it at every meal. Today, dishes made with spinach are known as Florentine, reflecting Catherine’s birth in Florence.

Savoy:  This dark green spinach has curly leaves, and producers usually sell it in fresh bunches.
Flat or Smooth Leaf:  You know this spinach by its broad, smooth leaves. It’s mainly grown for canned and frozen spinach, soups, baby food, and processed foods.
Semi-savoy: Its crinkly leaves have more texture than other spinach. Producers sell this hybrid variety fresh and processed.

National Day Calendar continues researching the origin of this leafy holiday. However, we’ve ruled out Popeye, the sailor man.

Q. How many calories are in spinach?
A. Two cups of fresh spinach contains approximately 14 calories.

Q. Can spinach be cooked?
A. Yes! Spinach is delicious fresh or cooked.

Q. What is the best time of year to grow spinach?
A. Spinach is a cool-weather crop, so plant it early in the spring for best results. Spinach does not grow well in the hot summer temperatures.