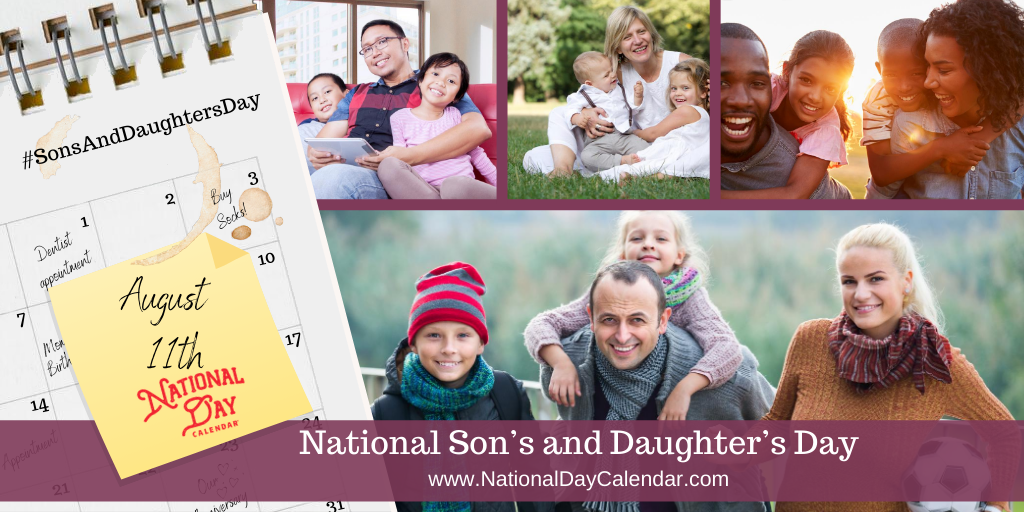 National Son’s and Daughter’s Day on August 11th brings parents and their children together for quality time. On this day, be with the joys of your life.

Let your children know that you are glad they are part of your life. While listening to the events of their day, share family stories. Find out about their hopes and dreams. Learn what inspires them. Teach them something new, or maybe there’s something they can teach you. Enjoy every day you have with them and spend as much quality time as you can.

Time with our children can be fleeting. Not only do they grow quickly, but their interests and needs change, too. Whether we realize it or not, sons and daughters look up to us. They emulate our behavior – the good and the bad. As much as times change, children don’t. We craved our parent’s approval and acceptance. Our children do, too.

Every child is different. Their personalities uniquely fitted to them. While one child devours books, another may deconstruct every electronic device in the house. The chatterbox keeps us awake on long road trips and the night owl keeps us alert to everything under the stars. No two are the same. That’s exactly how it’s supposed to be. Celebrate them and the parts they play in your family.

Do something special for your children today. If they are at home, go for a walk, or enjoy a local park. Send a card or make a phone call to grown children. Remind them how special they are to you. Use #SonsAndDaughtersDay on social media.

The earliest record National Day Calendar could find of an August 11th observance of this day took place in 1988. It’s mentioned in a Nanaimo (British Columbia, Canada) Daily News article dated August 12, 1988. While we were unable to identify the creator of National Son’s and Daughter’s Day, we did find other earlier events with this name.

According to an article in the August 20, 1944, St. Joseph News-Press/Gazette, in 1936, J Henry Dusenberry first pursued the idea of a Sons’ and Daughters’ Day. The thought occurred to him after hearing a child ask why there was no such occasion. Through his efforts, the day started in Missouri and spread. Parents placed a flower representing each of their children in a vase and put the vase in a prominent room in the house. Throughout the day, parents thought about their children as they gazed at the flowers, especially those who no longer lived in the house. By 1945, the celebration reached its peak at 22 states with organizations participating in the event.

In the following years, organizations such as the Lions Club and women’s auxiliaries would host Sons and Daughters Day in their municipalities. However, these observances would change from year to year.

Then, in 1972, Florida Congressman Claude Pepper submitted a request for the establishment of a Sons’ and Daughters’ Day on behalf of Georgia Paul of Del Rio, Texas. According to the Del Rio News-Herald dated October 28, 1972, the request suggested the proclamation would observe the day on last Sunday in January annually. However, neither the House nor the Senate signed a bill or joint resolution to declare the day.

August 11th Celebrated (and Not So Celebrated) History

John Bray becomes the first animator to patent animation and the assembly line process for mass-produced cartoons. However, his patent was eventually rejected because he submitted another man’s techniques – Winsor McCay.

The Beatles premiere the movie Help in New York City.

President Ronald Regan jokes during a sound test that he has “signed legislation that would outlaw Russia forever. We begin bombing in 5 minutes.”

With 330 stores, the Mall of American in downtown Minneapolis, Minnesota opens. It is the largest shopping mall in the United States.

One of the most widely viewed total solar eclipses in history begins in the west Atlantic and passed over Europe, the Middle East, and ended over the Bay of Bengal. However, much of the northeastern United States viewed a partial eclipse.

Biologists publish an article revealing the oldest living vertebrate on Earth. The Greenland shark lives between 272 years and maybe even as long as 512 years.

August 11th Celebrated (and Not So Celebrated) Birthdays

The prolific children’s author is best known for her novels The Famous Five, The Secret Seven, and Noddy.

Browne is best known for his comic book characters Hägar the Horrible and Hi and Louis.

The American author is best known for his book Roots: The Saga of an American Family. The book has been produced into a television mini-series twice – once in 1979 and again in 2016.

After an 18-year career, professional baseball player and center fielder, Pinson was elected to the Cincinnati Reds Hall of Fame just two years after his retirement.

Best known as the author of The Magic School Bus, Cole made science fun for children of all ages. Her Ms. Frizzle characters and the students debuted in an animated series in 1994.

With an I.Q. more than double the average person, vos Savant is ranked by Guinness World Records as the woman with the highest I.Q. in the world. She writes the “Ask Marilyn” column for Parade Magazine.

As an entrepreneur, McCaw led the way into the wireless frontier when he launched McCaw Cellular. The company was later sold to AT&T.

The electronics engineer, programmer, and entrepreneur joined forces with Steve Jobs to launch Apple Inc in 1977.

Terry Eugene Bollea wrestled under his ring name Hulk Hogan from 1977 to 2012. Hogan has also appeared in several movies and television shows.

The award-winning actress, Viola Davis, is the first black actress to receive an Academy Award, Emmy Award, and Tony Award. Some of her most notable roles include Doubt, The Help, and How to Get Away with Murder.

Best known for his role as Thor in the Marvel films, the Australian actor also played the father of James T. Kirk and starred in Snow White and the Huntsman.