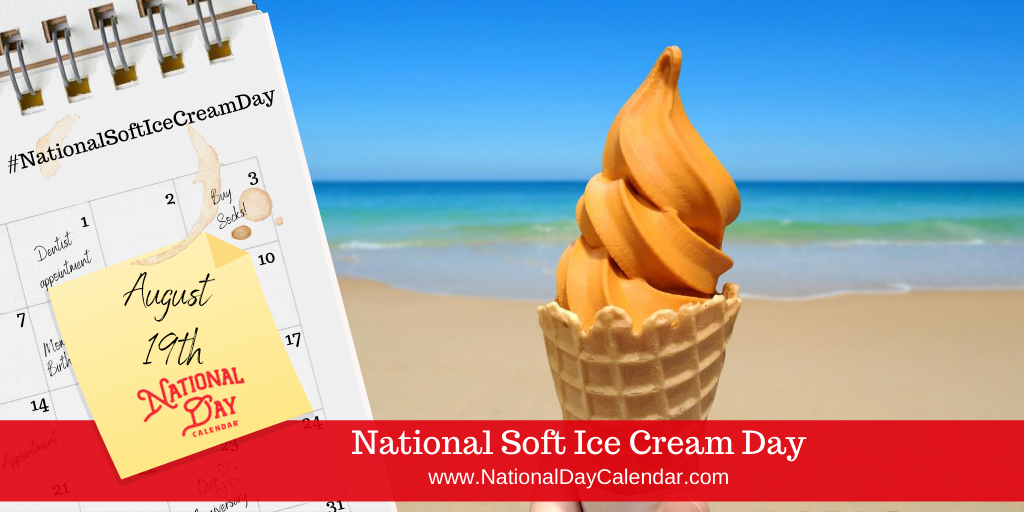 National Soft Ice Cream Day on August 19th gives us a tasty way to cool off on a hot summer day. Whether you enjoy it in a bowl or on a cone, grab some soft serve and enjoy!

In 1934 on Memorial Day weekend in Hartsdale, New York, Tom Carvel had a flat tire. After pulling his ice cream truck into a parking lot, the businessman knew his product was melting. As vacationers drove by, Carvel sold the softened ice cream to them. Surprisingly, they loved the soft ice cream! The potential for a new dessert was not lost on the salesman. Instead of a roving ice cream truck, Carvel could have a fixed location with soft ice cream.

It wasn’t long before other businesses began to crop up. The hard ice cream industry began to object. Despite both products providing similar flavors, servings, and enjoyment, they were different. Hard ice cream business did suffer a reduction in revenue during the first years of soft ice cream’s popularity. Even the Minnesota legislature passed laws prohibiting the sale (technically by law it was considered to be ice milk) of soft-serve ice cream from a machine. It had to be sold pre-packaged. The law was later changed. (Star Tribune, Minneapolis, Minnesota, 19 Aug 1951)

How different are soft and hard ice creams? While they are made with the same ingredients, soft ice cream has less milk fat. It also has more air than hard ice cream. Both of these factors contribute to the ice cream being more delicate and smoother. The milk fats in the hard ice cream cause it to be firmer when frozen.

There are many ways to enjoy soft ice cream. Order a dipped cone or have a sundae. Soft ice cream comes in a variety of flavors. One that seems to taste better as soft serve is chocolate mint. However, that may just be an opinion. Go out for some soft ice cream and use #NationalSoftIceCreamDay to post on social media.

We were unable to find the creator of National Soft Ice Cream Day.

Q. What are the main ingredients in ice cream?
A. Ice cream’s main ingredients include milk, cream, sugar, and eggs. However, many commercial ice creams use a variety of additional ingredients to enhance flavor and improve creaminess. Those ingredients may include corn syrup, natural and artificial flavors, glycerides (a type of fat), guar or xanthan gum to name a few.

Q. Is homemade ice cream healthier than store-bought?
A. It can be. When it comes to making your own ice cream, you can control the ingredients, including the amount of sugar, fat, and type of dairy used. For those who cannot have dairy, many recipes substitute nut milk for cow’s milk.

Q. Is ice cream unhealthy?
A. Like any dessert, eating ice cream in moderation is not unhealthy. Limiting serving sizes and eating it as an occasional treat should not impact your health. There are also healthier options available such as low-fat, low-calorie options.

August 19th Celebrated (and Not So Celebrated) History

James Tyndall completes the first ascent of the Weisshorn – the 5th highest peak in the Alps.

Paul Boynton and George Fearn compete in an international swimming race. The race required Boynton to swim 12 miles and Fearn to swim 10. Boynton wins due to Fearn suffering cramps.

Dmitri Mendeleev (founder of the modern-day periodic table) makes a solo ascent by balloon for the sheer purpose of observing a solar eclipse.

The Indianapolis Motor Speedway hosts its first race. While several records were broken, two men (one driver and one mechanic) were killed during the 250-mile race.

William B. Ward registers the trademark for Hostess.

The American Broadcasting Company (ABC) begins airing Saturday morning television shows for children – and none of them were cartoons either. The two featured shows were Animal Clinic and Acrobat Ranch.

Carly Patterson wins the all-around gold medal in gymnastics at the Olympic Games in Athens, becoming the second American to do so. The first? Mary Lou Retton. However, since Retton won her all-round under a boycotted Olympics, Patterson’s gold is the first at a non-boycotted Olympics.

At the 2016 Rio de Janeiro Olympics, a six-way tie for first in the equestrian individual jumping competition leads to a jump-off to name the winner.

August 19th Celebrated (and Not So Celebrated) Birthdays

The Philadelphia pharmacist developed a drink he called root beer.

Beginning his professional baseball career as first baseman for the St. Louis Brown Stockings, Comiskey would go on to be a founding owner of the Chicago White Sox.

As a Dayton, Ohio native, Wright, along with his brother Wilbur, would be the first to successfully fly a motor-powered plane.

Founder of the Chanel brand, the French fashion designer’s line of products lives on.

Nash’s light-hearted poetry brought a particular style of humor to the poetry world. He also worked at the publishing house Doubleday and on the staff of the New Yorker. Some examples of Nash’s twists of phrase include:

A bit of talcum
Is always walcum.

Candy
Is Dandy
But liquor
Is quicker.

Born Annakkutty in present-day Kerala, India, she would become a religious teacher at Vakakkad. She died at the convent of the Franciscan Clarists at Bharananganam in 1946. In 1986, Pope John Paull II proclaimed her St. Alphonsa, the first saint of Indian origin.

As an attorney and barrister, Heilbron became the first woman appointed to the Kings Counsel. She broke several other barriers as well, one such first was as a woman judge in 1972.

As a journalist and screenwriter, Lardner won two Oscars. The first was for the 1943 film Woman of the Year and the second was for the 1970 film MASH.

The businessman and editor took over the publication of Forbes in 1954 after the death of his father, B.C. Forbes.

As a pioneering programmer for IBM, Cobb developed several methods and processes for data processing.

One of the best-known jockeys in racing history, Shoemaker was the winningest jockey of his time.

The one-time fashion model became a photographer in her own right.

The entrepreneur is co-founder and CEO of the multibillion-dollar software company Computer Associates International.

Clinton served two terms as the 42nd President of the United States.

The actor is best known for his roles in television sitcoms including Full House, Fuller House and Grandfathered.

The country music singer is best known for her hit song “I Hope You Dance” for which she earned an Academy of Country Music Award for single record of the year in 2001.

The comic book creator is known for her works Blue Monday and Queen Bee.