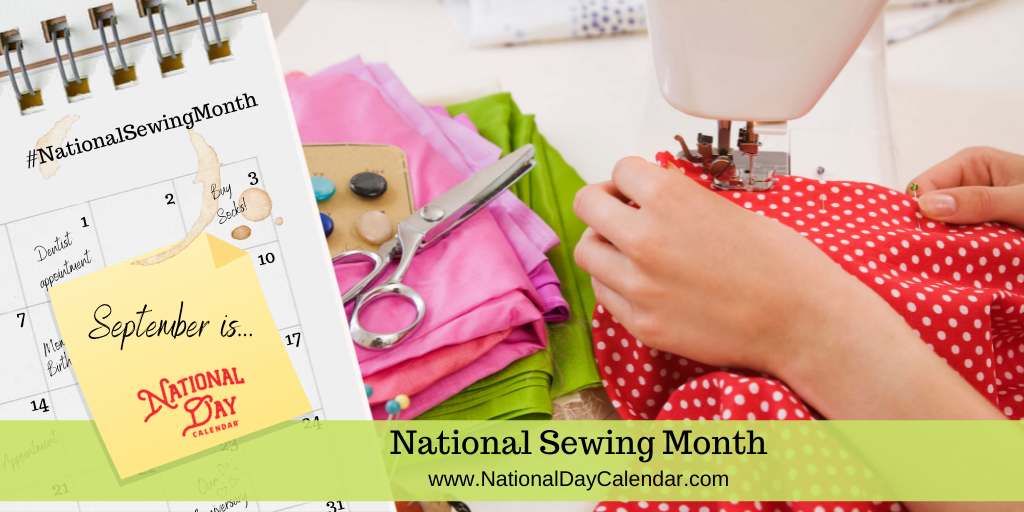 National Sewing Month in September! Sew it seams we should take time to honor the history of sewing and those who enjoy sewing!

The art of sewing dates back to 25,000 B.C.E., otherwise known as the Upper Paleolithic Age. During this time, sewing was used to make clothing and shelter. Early materials consisted mostly of hide from animals and plant leaves. Early threading consisted of thin strips of animal hide. Furthermore, the use of bone and ivory was used as the first forms of needles.

Most people think of sewing as it relates to the invention of the sewing machine by Thomas Saint in 1750. Later, in 1851, Isaac Singer perfected the existing device. Singer’s prototype became the industry standard of what we know as the sewing machine. Up until the 19th century, sewing had been done by hand. Sewing societies began to form widely in the 1860s.

It might seem that sewing is a dying trade, but surprisingly, it’s still enjoyed by people from all walks of life. Sewing is a hobby enjoyed by millions of people throughout the world. Used as a great way to relax, sewing can help you clear your mind of daily hassles so you can enjoy the simple things in life. Creating quilts, clothing and other masterpieces will bring you personal satisfaction to you every time. Whether you like to sew from scratch, alter clothing or re-purpose your wardrobe, sewing is a pleasurable activity to enjoy solo or with friends.

Explore your local community to find a sewing club to join. Whether you’re a beginner or a novice sewer, the rewards of sewing with peers is great for relaxing and socializing. You never know, you might even learn some new tricks from an expert!

Use #NationalSewingMonth in your social media correspondence.

Educators and families, visit the National Day Calendar Classroom for project ideas that help you to Celebrate Every Day!

National Sewing Month began in 1982 with the proclamation by President Ronald Reagan. The Sewing and Craft Alliance and the American Sewing Guild serve as sponsors.