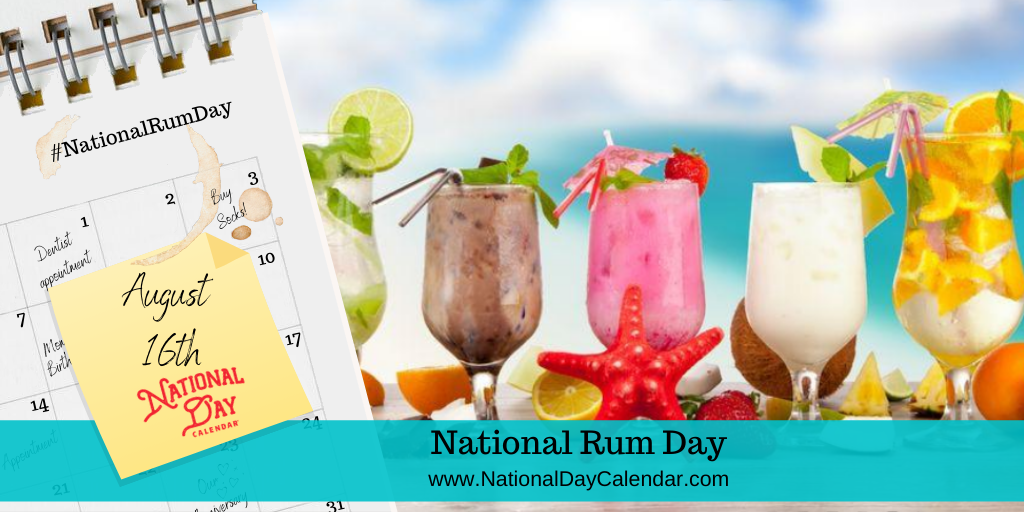 Join National Rum Day on August 16th as blended beverages and cocktails create a delicious celebration. Rum is a distilled clear alcoholic beverage which is a byproduct of sugar production. It can also be made directly from sugar cane juice. After the fermentation and distillation process, most rum ages in wooden oak barrels.

RUM FACT: In 1764, the British Crown placed a tax on sugar, molasses and rum on the American colonies. This tax was called The Sugar Act of 1764. It was instrumental in the unrest that finally became the American Revolution.

Rum is the third most popular spirit in the United States. Only vodka and all the whiskeys combined beat it for first and second-rankings. The spirit finds its way into citrusy mixed drinks, and cool blended summer cocktails. So much so, that rum stirs up images of sandy beaches and brightly colored umbrellas in fruity drinks.

However, rum also conjures up sailors and pirates. The reason for that is how rum came to be. In the West Indies during the 1600s, large plantations grew sugar cane. When they extracted the sugar, they created a by-product called molasses. For years, the molasses was a waste product until it was discovered it could be distilled – into rum. Then, rum became not only a commodity for trade but also a ration on the ships delivering the product. Even in the modern Royal Navy, British sailors received an allotment of rum until 1970.

There are many ways to enjoy rum. On a hot summer day, a great way to celebrate is with this recipe for a Strawberry Pineapple Cooler. Use #NationalRumDay to post on social media. Remember always to drink responsibly and never to drink and drive

We were unable to identify the creator of National Rum Day.

Q. How many calories are in rum?
A. Depending on the brand, rum can contain between 70-110 calories per 1.5 fluid ounce shot.

Q. Is rum better served hot or cold?
A. Rum makes great hot and cold cocktails. Hot buttered rum is probably the first to come to mind. Others include Hot Toddy and rum-spiked apple cider. However, rum tops the ingredients list of many chilled and blended cocktails, too. Rum punch, rum and soda, and tea are common.

Q. Are there other rum-related holidays?
A. Absolutely! National Pina Colada Day and National Daiquiri Day are two.

Q. Does rum expire?
A. For the best flavor, an opened bottle of rum should be consumed within six months.

Q. Will an unopened bottle of rum improve with age?
A. Once bottled, spirits like rum do not improve with age. However, many spirits do undergo an aging process while still in the barrel. Distillers perfect this process over many years.

August 16th Celebrated (and Not So Celebrated) History

Professional pitcher, Fred Goldsmith successfully proves the curveball is not an optical illusion. In the demonstration, the tricky and twisty pitcher repeatedly pitched around a center pole driven into the ground and brought the ball back across the before reaching the target.

Edwin Prescott patents the “loop-de-loop” roller coaster which he operated at Coney Island.

The United States and Canada sign one of the first treaties designed to protect wildlife – The Migratory Bird Treaty Act.

Sports Illustrated publishes its first issue. The cover photo was of Milwaukee Braves batter Eddie Mathews swinging away at a home game against the New York Giants.

After a disappointing performance during an audition, the Beatles release drummer Pete Best. They replaced him with Ringo Starr a few days later.

Elvis Presley dies of a heart attack in his Memphis home at the age of 42.

Actress Carrie Fisher and musician Paul Simon marry. They would divorce less than a year later.

August 16th Celebrated (and Not So Celebrated) Birthdays

Coaching until the age of 98, Stagg contributed to college football both as a player and coach. He coached more than any other American football coach, too – 71 years.

Gernsback is known for his contributions to the science fiction genre. He published one of the first magazines dedicated to the genre- Amazing Stories.

Nicknamed Lawrence of Arabia, the military leader is noted for his role in several campaigns, including the Arab Revolt.

As an American animator, Messmer created the cartoon character Felix the Cat.

As a journalist and author, Lomax became the first African-American television journalist. He hosted a weekly talk show and also interviewed Malcolm X in the documentary The Hate that Hate Produced with Mike Wallace.

Peres served as both the 9th President of Israel and prime minister.

The professional ballet dancer is known for her long and successful career. She founded her own ballet company in 2000, the Suzanne Farrel Ballet.

Gifford has hosted the talk show Live! with Regis and Kathie Lee as well as the fourth hour of the Today show with Hoda Kotb.

Hollywood director and producer, James Cameron, is known for his blockbuster hits such as The Terminator series, Titanic, and Avatar.

Bassett is known for her roles in American Horror Story, Black Panther and Waiting to Exhale.

Known as the Queen of Pop, the performer released her first single in 1982. She quickly rose to stardom after the release of her first album Madonna a year later.

Best known for his role as Michael Scott in the sitcom The Office, the comedian also starred in films such as The 40-Year-Old Virgin and the Anchorman series. He also voiced the character Gru in the animated collection from Despicable Me.