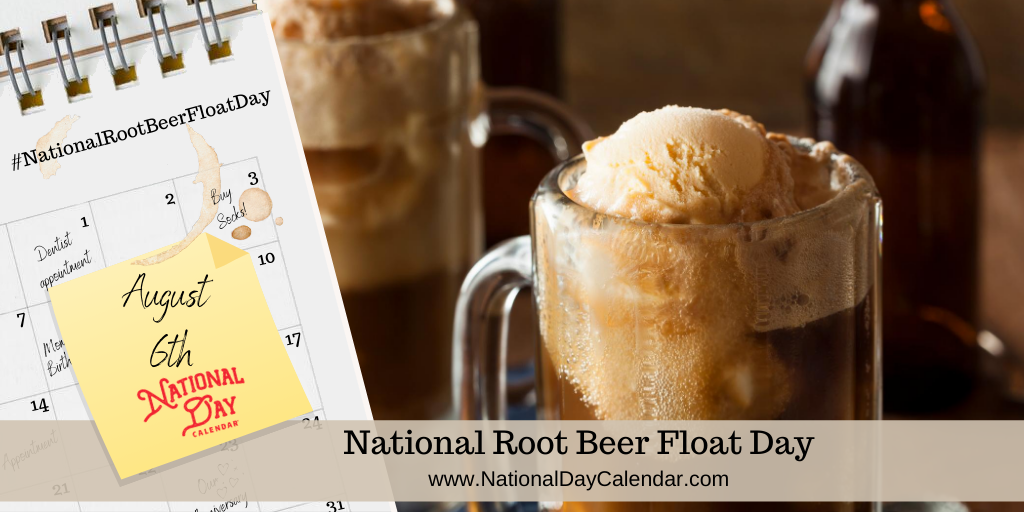 On August 6th, National Root Beer Float Day tells us to float a scoop of vanilla ice cream in an ice-cold mug of frothy root beer. The classic beverage creates a creamy treat loved by generations!

Also known as the “Black Cow,” the root beer float got its start in Colorado in a mining camp. Frank J. Wisner of Cripple Creek, Colorado, gets the credit for inventing the “Black Cow” way back in August of 1893.

One night Wisner, owner of the Cripple Creek Cow Mountain Gold Mining Company, was staring out the window and thinking about the line of soda waters he was producing for the citizens of Cripple Creek when he came upon an idea. The full moon that night shined on the snow-capped Cow Mountain and reminded him of a scoop of vanilla ice cream. He hurried back to his bar and scooped a spoonful of ice cream into the children’s favorite flavor of soda, Myers Avenue Red Root Beer. After trying, he liked it and served it the very next day. It was an immediate hit.

Since its inception, hundreds of thousands of root beer floats have been enjoyed around the country each day.

Gather up some root beer and ice cream and mix up the perfect root beer float. Enjoy a root beer float over lunch or dinner at your favorite restaurant.  Use #RootBeerFloatDay to post on social media and spread the word.

If a root beer float is your favorite ice cream soda, National Ice Cream Soda Day is on June 20 so you can enjoy it twice!

We were unable to identify the creator of National Root Beer Float Day.

August 6th Celebrated (and Not So Celebrated) History

Congress passes the Confiscation Act. The first of its kind, the act allowed Union seizure of Confederate property. It also essentially freed slaves who fought for the Confederacy.

Pitcher Cy Young makes his MLB debut with the Cleveland Spiders. He pitched the team to an 8-1 victory over the Chicago Colts.

Alice Ramsey drove a 1909 Maxwell DA across the United States. She along with her companions, Nettie Powell and Margaret Atwood, became the first women to complete a transcontinental road trip by automobile.

Starring John Barrymore, Don Juan debuted in New York City. It became the first feature-length film to include a synchronized score and sound effects using Vitaphone sound-on-disc. However, the film contained no dialogue.

At the Berlin Olympics, Japanese athletes Naoto Tajima and Masao Harada take gold and silver in the triple jump.

The United States drops an atomic bomb on Hiroshima, Japan. The B-29 Enola Gay was accompanied by two other B-29s. After being given the all-clear, the bombardier deployed Little Boy containing approximately 141 pounds of uranium.

Chubby Checker performs “The Twist” on American Bandstand for the first time. Soon after, the dance and song became a dance craze that swept the nation. It also caught the attention of those in authority. Some communities around the world banned “The Twist” along with Rock and Roll music.

President Lyndon B. Johnson signs the Voting Rights Act. The act guaranteed the right to vote for African Americans. While the legislation was weakly enforced, it did provide a legal foothold for Black voters across the country.

Muhammad Ali maintains his undisputed heavyweight champion title. In a fight held at Earl’s Court in London, the American boxer knocked out English boxer Brian London in the third round.

Roberto Clemente is inducted into the National Baseball Hall of Fame. The milestone made him the first Latin American and Caribbean player to join the Hall of Fame. Other players enshrined that day were Warren Spahn, Billy Evans, Mickey Welch, and High Pockets Kelly.

Debbie Doom, the right-handed pitcher for the United States Softball Team, pitched two consecutive perfect games at the 1991 Pan American Games. Hosted by Havana, Cuba, the games put Doom in the spotlight. She would go on to pitch professionally in Women’s Pro Fastpitch.

August 6th Celebrated (and Not So Celebrated) Birthdays

Along with her sister, Mary, Beecher founded Hartford Female Seminary. She became an advocate for women’s education and the school provided a wide range of academic subjects.

One of the world’s best-known Victorian poets, Tennyson earned notoriety during his lifetime. Poems like “Ulysses” and “The Charge of the Light Brigade” are just two of his renowned poems.

As the second wife of President Theodore Roosevelt, Edith served as the 1st Lady of the United States.

The microbiologist made the accidental discovery of the anti-bacterial properties of a mold called Penicillium. His discovery would lead to the antibiotic penicillin.

As a lawyer, Milholland pursued the law but as a woman, she did not have the right to vote. The activist became a high profile leader in the Suffrage Movement. While her efforts led to success with the ratification of the 19th Amendment on August 18, 1920, she would die nearly 4 years before.

As an actor and comedian, Ball thrilled generations with her timing and skill. Best known for her role in the I Love Lucy television series, the comedian also starred in numerous films and variety shows.

Over his 54 year career, actor Robert Mitchum played roles in westerns, romances, and war films. He is probably best known for his roles in The Story of G.I. Joe and Cape Fear.

The eclectic artist, director, and producer is best known for his pop art. His subjects included public figures and commercial logos.

As an American filmmaker, Shyamalan is known for his subtle misdirection in his storytelling, keeping viewers guessing until the very end of his films. A few of his best-known films include The Sixth Sense, The Village and Signs.

Actor and voice actor, Frye is best known for her role as Punky Brewster in the sitcom by the same name.