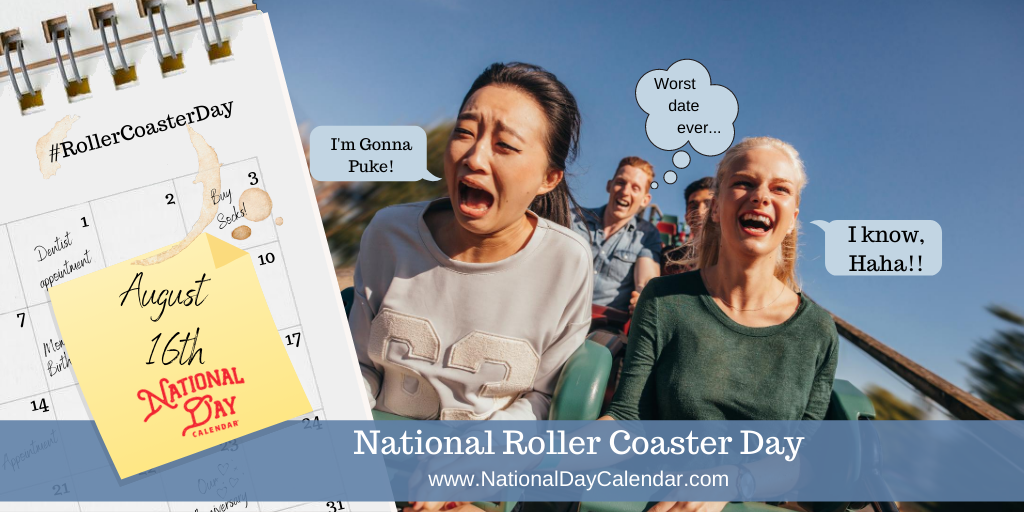 Each year on August 16th, people flock to amusement parks for a thrill, a few exciting screams, and to celebrate National Roller Coaster Day. Take a ride on a roller coaster near you.

The day commemorates the first verticle loop roller coaster which was patented by Edwin Prescott on this day in 1898. A roller coaster consists of one or multiple cars on a track. While they are similar to railroad systems in design, the inclines and vertical loops incorporated in the structures aren’t for transportation. These elements boost the thrills rollercoaster enthusiasts seek!

The oldest roller coasters are believed to have originated from the so-called “Russian Mountains.” Built-in the 17th century, these specially constructed hills of ice located near Saint Petersburg, Russia rose between 70 and 80 feet in height. Passengers faced 50-degree drops. Wooden supports supplied reinforcement.

Roller coaster designs existed since at least 1872 when J.G. Taylor received one of the earliest patents. He called his creation an inclined railway. Another patent granted for an inclined-plane railway was granted to Richard Knudsen in 1878.

For years, history has believed the first roller coaster in America opened at Coney Island on June 26, 1884. However, tracing J.G. Taylor’s patent and newspaper articles tells us a different story. According to the Providence Evening Press dated June 1872, Taylor’s elevated railway at Rocky Point, Rhode Island extended 400 feet and gave nine passengers a ride. It all started with a shove, allowing gravity to do the rest.

While Prescott’s patent detailed ways to improve upon structures such as J.G. Taylor’s and that built at Coney Island, it was Prescott’s designs that led to the roller coasters we know today. His design gave riders a reason to scream and keep coming back for the rush of excitement.

Celebrate by visiting an amusement park near you. While enjoying a roller coaster ride or two, also check out some roller coaster history. Check out the science behind the structures and the gravity-defying curves. Seek out some of the most thrilling roller coasters in the country and world! If you cannot get to a roller coaster, make plans for your next roller coaster adventure! Use #RollerCoasterDay to post on social media.

Since 1986, National Roller Coaster Day has been celebrated. Roller coaster enthusiasts around the country promote the day through amusement parks with events.

Q. What roller coaster has the most inversions?
A. The Smiler at Alton Towers Resort located in Staffordshire, UK turns thrill-seekers on their heads 14 times!