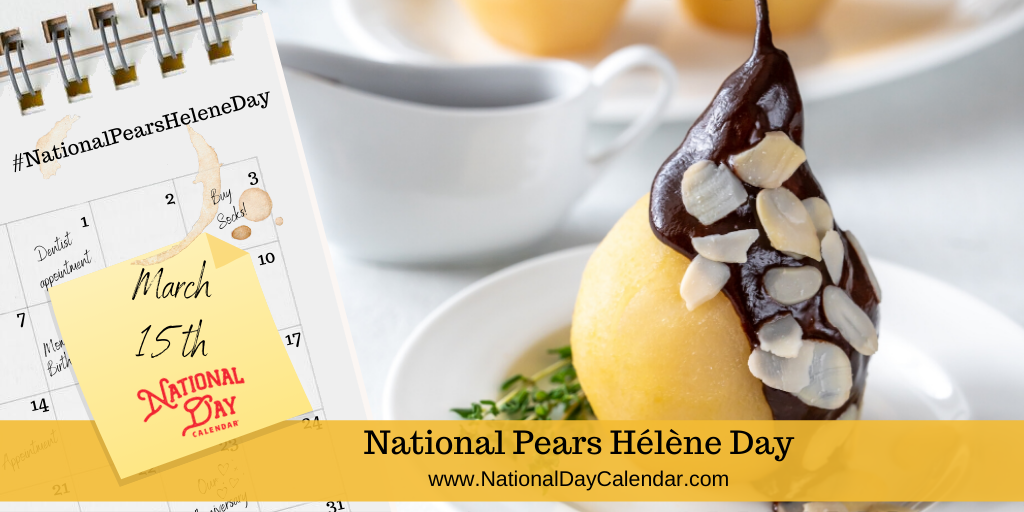 Pears Hélène is a dessert made from pears poached in sugar syrup and served with vanilla ice cream, chocolate syrup, and crystallized violets. Around 1864, French Chef Auguste Escoffier created the dessert in honor of the operetta La belle Hélène by Jacques Offenbach.

Over time, simpler versions of Pears Hélène have been developed by substituting poached pears with canned pears and the delicate crystallized violets have been replaced with sliced almonds. These modifications have made it easier for more cooks to prepare this must-have dessert.

Q. When are pears in season?
A. Prime pear season is from August to September.

Q. Do pears ripen on the tree?
A. No. Pears are best when they ripen off the tree.

Q. How many calories are in a pear?
A. One medium pear contains approximately 102 calories.

March 15th Celebrated (and Not So Celebrated) History

Jesse W. Reno of New York City patented an “endless conveyor or elevator” that operated as a ride at Coney Island. His patent no. 470,918 describes an escalator-type machine. The Otis Elevator Company would purchase Reno’s company after the turn of the century.

The first presidential press conference is held in the Oval Office. Just eleven days before, President Woodrow Wilson had been inaugurated and his secretary encouraged him to hold a meeting with the press. An appointment was made and more than 100 reporters fill Wilson’s office. While the location of the presidential press conference may be different, that meeting over 100 years ago kicked off a tradition that still continues today.

Over a weekend in Paris, more than 1,000 American Expeditionary Forces gathered to launch a patriotic veteran service organization. Today the American Legion is comprised of current and former members of the military. The organization makes many contributions in support of youth and veterans including creating the American Legion Baseball program, leadership programs, financial support to the Vietnam Memorial, scholarships, and much more.

March 15th Celebrated (and Not So Celebrated) Birthdays

The people elected the durable seventh U.S. president known as “Old Hickory” for being tough in battle to a two-term presidency.

As an anthropologist, Alice Cunningham Fletcher immersed herself in Native American cultures and pioneered ethnological study.

In 1901, the German physiologist received the Nobel Prize in Physiology or Medicine for “for his work on serum therapy, especially its application against diphtheria…” It was the first Nobel Prize for medicine in the history of the award.

In 1903, the American horticulturist and botanist co-founded the American Society for Horticultural Science. He was immensely dedicated to rural communities and their cooperative efforts. Many of his influences still exist today in the form of county extension services, 4-H Clubs, and rural services.

The American writer is best known for her work on television sitcoms like I Love Lucy, The Lucy Show, and Life with Lucy.

In 1993, President Bill Clinton appointed Ruth Bader Ginsburg to the Supreme Court of the United States. She served 27 years, often seen as an advocate for women’s rights, until her death in 2020.

The pioneer of funk was born Sylvester Stewart and led the band Sly and the Family Stone. Songs like “Dance to the Music” and “Everyday People” brought dancers to their feet.