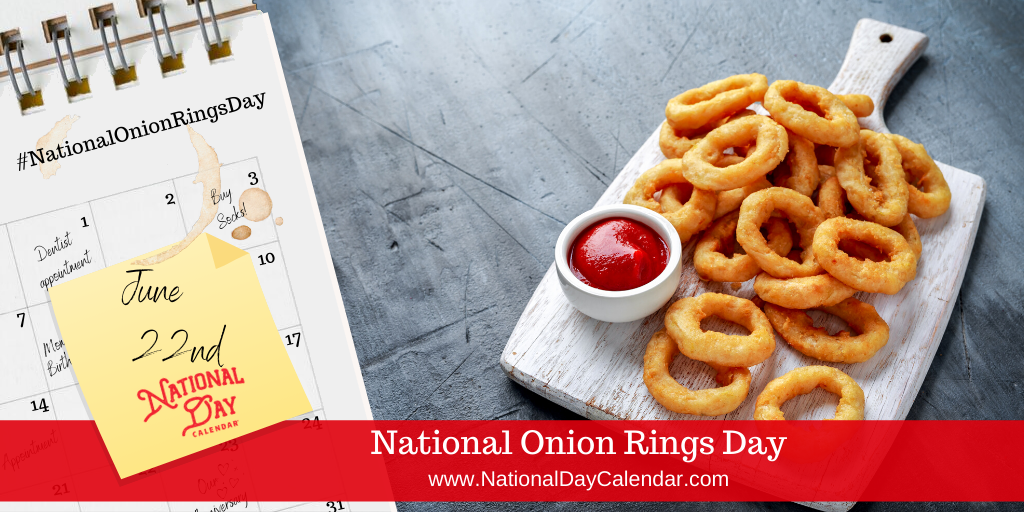 On June 22nd, National Onion Rings Day recognizes a batter-dipped, deep-fried bite of deliciousness that runs rings around other appetizers.

Also found in Canada, the United Kingdom, Ireland, Australia, and some parts of Asia, onion rings exact origin are unknown.

Many agree onion rings taste best hot from the fryer. Whether you dip them in a sauce or not is up to you. There are plenty to choose from these days, too. Sweet, spicy, salt and vinegar, and everything in between.

Head out to your favorite diner and order up some onion rings. You can also make them at home. We even have a recipe for you to try. Of course, you may have a family favorite, and if you do, be sure to show it off!

How will you be celebrating? Let us know using #NationalOnionRingsDay on social media.

National Day Calendar is researching the origins of this appetizing holiday.

June 22nd Celebrated (and Not So Celebrated) History

Adrien Decambre of France and James Hadden Young of England received the first U.S. patent for a type-setting machine. Patent no. 2,139 for their “Pianotype” machine allowed types to be placed using levers and gravity.

June 22nd Celebrated (and Not So Celebrated) Birthdays

While working for 3M, Richard Gurley Drew invented masking and cellophane tape. He created the tape from cellulose and originally called it cellulose tape. His career started at the 3M company in 1920 in St. Paul, Minnesota, where he developed a masking tape for the automotive industry in 1925.

The notorious American gangster earned the nickname “Public Enemy No. 1” during the Great Depression.

The breast cancer survivor, author, and journalist became an advocate who helped change the standard of care for breast cancer treatment.

Octavia Butler is best known for the novel Kindred, also published the Patternist series of science fiction novels. She brought human issues to her storytelling and opened the door for other black women writers to pursue science fiction.

“Time After Time” “Girls Just Wanna Have Fun” so they show their “True Colors.” The American pop singer-songwriter and actress has been performing for more than 40 years.