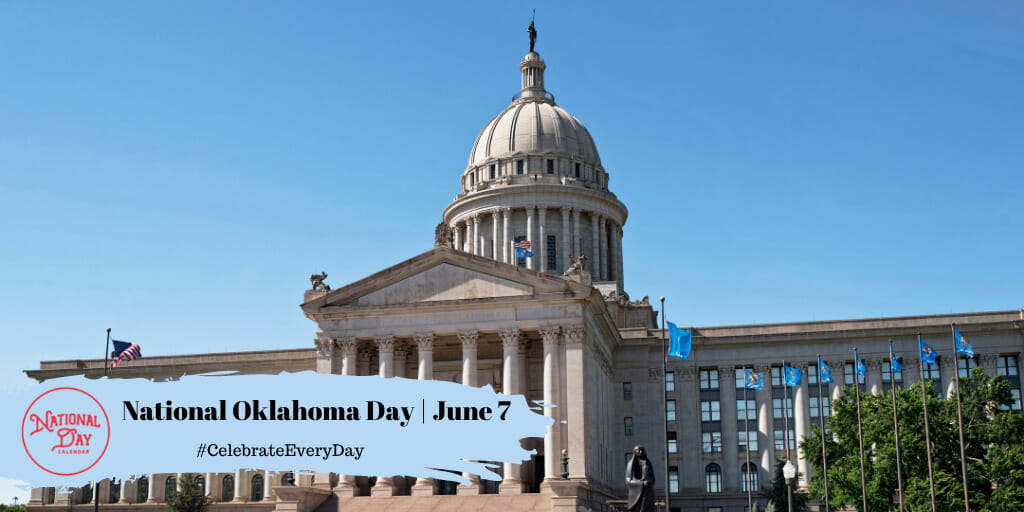 The panhandled state of Oklahoma is a dotted series of granite mountain peaks, sloping sandstone ridges, rolling hills, and plains. In 1803, the land became part of the United States through the Louisiana Purchase. Congress granted statehood on November 16, 1907.

Across the state of Oklahoma, significant sites record the result of the Indian Removal Act of 1830. The Trail of Tears National Historic Trail crosses nine states and describes the brutal impact on the lives of Cherokees, Chickasaws, Choctaws, Creeks, and Seminoles.

In 1889, several counties in Oklahoma became open to settlement by Land Run. Settlers could claim quarter sections of land only after a specific time (usually noon) on a set date. Some eager settlers would cross the boundary into the county seeking their preferred quarter section sooner than the stroke of noon, earning them (and the state) the nickname “Sooners.”

From the Arkansas River to the Neosho River, Oklahoma has scenic views, lakes, and mountain trails. Put on your hiking boots and make some trail mix for an afternoon adventure. After a good hike, take in Route 66 for a drive and maybe pick up some barbeque or something fried.  Oklahomans seem to have cornered the market on nearly everything fried. To mention a few, we came across fried okra and lamb balls and catfish. For something fresh, don’t forget the state fruit. Strawberries!

HOW TO OBSERVE National Oklahoma Day

Join National Day Calendar as we celebrate National Oklahoma Day. We’ll take a drive out on the open highway, and work up an appetite. Discover the best eateries in the state and explore the history that goes with them. Find adventure in The Sooner State and use #NationalOklahomaDay to share on social media.

Will Rogers’ cowboy humor found its way into his performances and writing throughout his career. Into his wit, Will wove a logic that rang true with the working class and rural populations.

All-around athlete and Olympian, Jim Thorpe competed in 15 events during the 1912 Summer Olympics in Stockholm, Sweden. He became the first Native American to earn an Olympic gold medal when he took first place in both the pentathlon and decathlon. Thorpe also made a solid showing in the other 13 events. However, Thorpe was stripped of his medals after the International Olympic Committee learned he had played minor-league baseball violating the amateurism rule.

Thorpe would go on to play professional football and professional basketball proving once again that his abilities stretch from field to court and beyond.

In October 1982, the IOC added James Thorpe’s name to the list of 1912 crowned Olympic champions and delivered two replica medals to his family. However, the IOC noted that the official report of the games would not be modified.

Clarence Nash voiced the lovable sputterings of Donald Duck and his nephews. He worked in the world of Disney for 50 years.

On a clear night far from the city lights, the Milky Way Galaxy can be easily identified. Deep within its center, Karl Jansky discovered radio waves emanating from the constellation Sagittarius. It was Jansky’s discovery that launched radio astronomy as a new science.

Woody Guthrie’s folk music spoke to the working public. From his anthems to his poetic lullabies, Guthrie spoke sung openly of the human condition or softly of its sweetest moments.

Founder of Walm-Mart stores, Sam Walton challenged the retail world with his discount pricing.
Over the radio, Paul Harvey’s voice told The Rest of the Story for 33 years. He was a nuanced storyteller whose commentary, humor, and news made for an enlightening part of millions of American’s day, but he also authored several books, appeared on television and news shows.
Naomi Parker Fraley’s chance photograph taken by J. Howard Miller in 1942 became the iconic image millions are familiar with today as “Rosie the Riveter.” It just took nearly 74 years to prove it. For years, another woman was identified as the inspiration for the “We Can Do It!” posters produced by Westinghouse Electric.
The highly honored prima ballerina, Maria Tallchief, became the first Native American woman to study ballet. Tallchief excelled in her career and together with her sister would found Chicago City Ballet.
First baseman, Mickey Mantle wow the fans for his entire 18 years in pinstripes. The New York Yankee earned seven World Series Championships and three American League MVPs titles. Mantle was the AL home run leader for four seasons, chasing Babe Ruth’s record of 61 home runs alongside teammate Roger Maris. Mantel would never break the record.
Darla Hood played little rascal, Darla, in the popular Our Gang series which began in 1935.
Chuck Norris doesn’t #Celebrate Every Day. Every day celebrates Chuck Norris.
Wilma Mankiller became the first woman to lead the Cherokee Nation as their chief. As an advocate during her tenure, she improved access to healthcare, education, and housing. As a result, membership increased.
Catcher, Johnny Bench, played 16 seasons for the Cincinnati Reds. The Hall of Famer earned two World Series Championships, World Series MVP in 1976, and two National League MVPs during his career. He was a 14-time All-Star and a 10-time Golden Glove recipient.
Ron Howard, known for his many roles in his youth from The Andy Griffith Show, American Graffiti and Happy Days, now makes a name for himself as a filmmaker. For decades he’s been producing thought-provoking and entertaining movies for all ages and earning recognition for his work.
Country music singer, Reba McEntire, also produces music and stars in television sitcom Malibu Country.
Attorney, Anita Hill, is most known for her testimony during Justice Clarence Thomas’s Supreme Court nomination hearing. While Thomas was appointed to the Supreme Court, Hill’s testimony shined a spotlight on workplace behavior.
Garth Brooks is the country music artist with Friends in Low Places and the man who put country music back on the map. He retooled the sound, the look, and the concerts, then stepped away and handed over the reined, albeit temporarily, to the next generation.