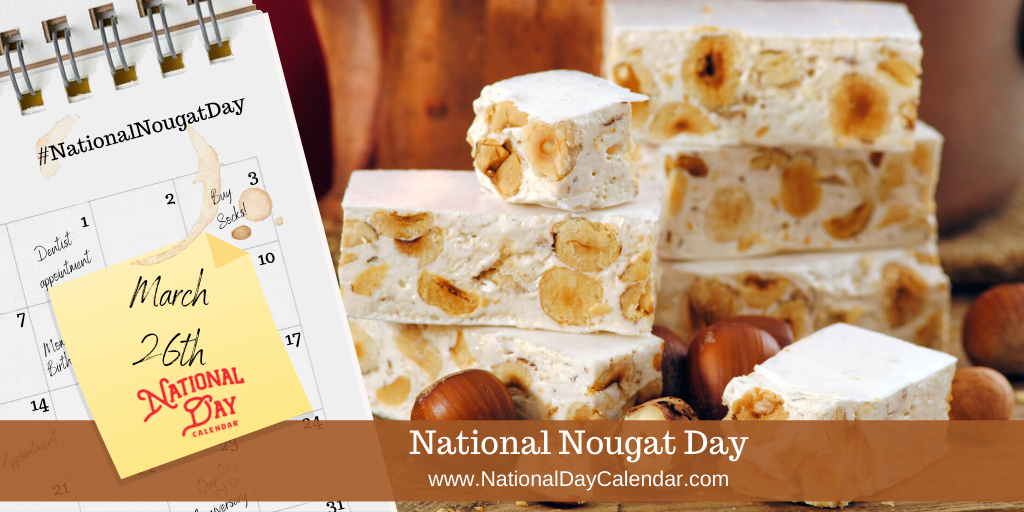 National Nougat Day on March 26th celebrates a soft and chewy or sometimes hard and crunchy candy often found at the center of a candy bar.

Made by whipping egg whites together and adding honey or sugar, roasted nuts, and sometimes candied fruit, some say nougat has been a sweet treat since ancient Rome. Enjoyed both as a candy all on its own or paired with chocolate or other flavorings.
Recipes range from the more traditional nougat made with almonds and honey to those with hints of citrus.
In Italy, they call it torrone. In Spain, a nougat is called turrón. The United States has a version made with corn syrup called divinity.

Three basic kinds of nougats include:

In the United States, modern candy bar makers use a different recipe than the traditional nougat. Today they make of a mixture of sucrose and corn syrup aerated with a whipping agent such as egg white or hydrolyzed soy protein or gelatin. It is the preferred and often used ingredient of large candy companies because it is inexpensive to make and used as a filler.

Q. What candy bars have nougat?
A. Many candy bars on the market are made with nougat. Some of them include:

Q. Does nougat come in different flavors?
A. Yes. There are as many nougat flavors as there are coffee syrups at your local coffee shop. Try these flavors: