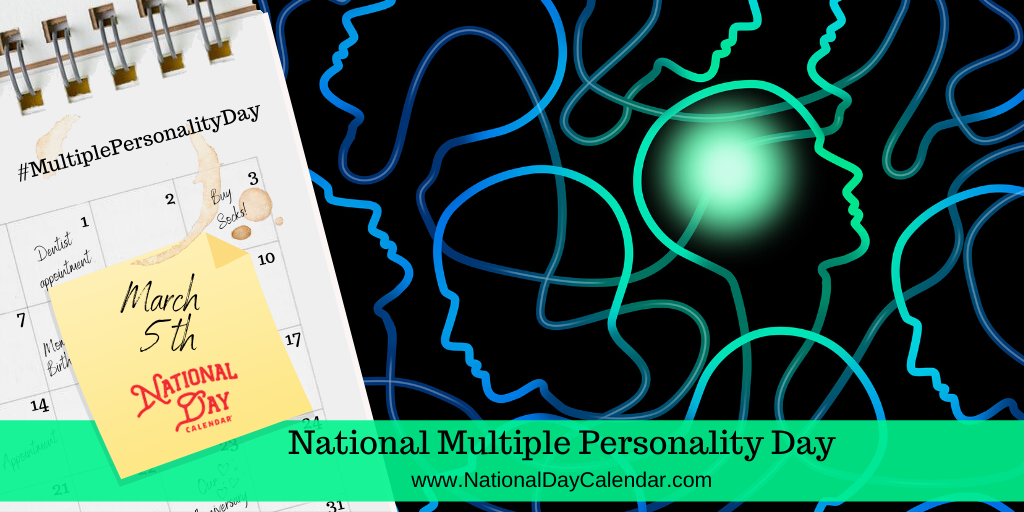 The first strategy takes an inward examination of our own personalities. This approach sees the day as a way to explore personality traits and examining the roots of those traits. Each one of us shows a different side of our characters at other times and in different places. Sometimes our personalities appear to be altered, depending on whom we are with and what we are doing. With these things in mind, the day focuses our thoughts on our own personality traits.

The other view of the observance aims to raise awareness of the disorder. Multiple Personality Disorder is better known as Dissociative Identity Disorder (DID). It is characterized by at least two distinct and relatively enduring identities or dissociated personality states that alternately control a person’s behavior. Someone with DID will experience memory impairment for important information not explained by ordinary forgetfulness. While the disorder affects less than .1 to 1 percent of the population, its impact is profound for that community and their family. The continued need for treatment, support, and research remains.

While there are two ways to approach this day, you can choose to recognize both. Start by exploring your personality traits. Take a personality test and learn more about your personality. Invite a friend to take the test with you and compare your results. Then, learn more about Dissociative Identity Disorder. Please find out how it affects a person and how it is treated. Attend a seminar or read up about the disorder. Show support for those with the disorder by sharing your new-found understanding.

National Day Calendar continues to research the origins of this multi-faceted day.

March 5th Celebrated (and Not So Celebrated) History

An incident involving British troops firing into a gathering mob in Boston kills five Americans including Crispus Attucks. Known as the Boston Massacre, the event would raise tensions among colonists and increase resistance to the Crown. Five years later, the Revolutionary War began.

The U.S. Patent Office issued patent no. 124,405 to George Westinghouse Jr. for his “Improvement in Steam-Air Brakes” for use on steam-powered locomotives.

March 5th Celebrated (and Not So Celebrated) Birthdays

The French scientist studied human and natural movement. He made many developments in photography to capture movement including a sphygmograph and chronophotograph that were predecessors to the motion picture camera.

In 1958, the Taiwanese-Japanese inventor founded Nissin Food Products Co., Ltd. He is the inventor of Chicken Ramen, the first instant ramen.

At 16-years-old, Jerrie Cobb earned her pilot’s license. By the age of 21, she was flying internationally. In 1959, she was one of thirteen women selected to completed Mercury astronaut training. Cobb completed all three phases, however, all 13 women would be denied any opportunity to fly as part of a NASA mission.

The evolutionary biologist is best known for her symbiotic theory of evolution. She published the theory in Origin of Eukaryotic Cells and in Symbiosis in Cell Evolution.

In 1980, the Laguna Pueblo author earned the American Book Award for her novel Ceremony. Some of her other works include Storyteller, Almanac of the Dead, Gardens in the Dunes and Yellow Woman.

The American magician, illusionist, and comedian has been performing since 1975 with his silent partner, Teller.