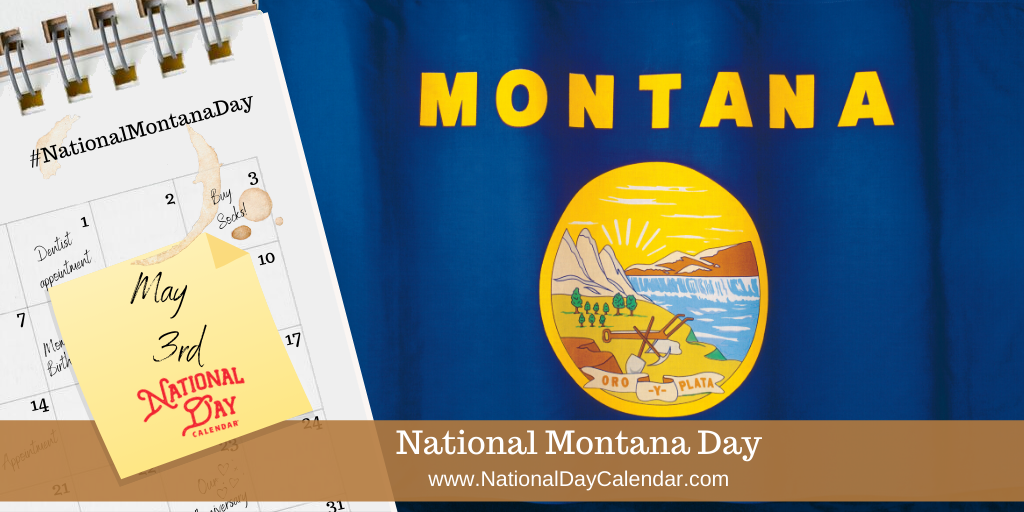 On May 3rd, National Montana Day recognizes The Treasure State and the big sky country.

It’s difficult to know where to begin when it comes to the 41st state in the U.S.A.

If we look up, big sky country is there day or night. The northern lights dazzle and dance at night and during the day, an azure blue paints the dome above us. But, it’s also the Yellowstone region of the states known for the big sky, its geysers, hot springs, mountain views, and the most entrances into the park.

Travel east and back in time to the June 1876 and the Battle of the Little Big Horn. Visit Custer National Cemetery; learn about the people who joined in the battle that day. Twelve years later on November 8, 1889, Montana became a state.

It’s easy to become distracted in Montana. The breathtaking mountain views alone can make one forget why they left the room. Glacier National Park, for example, is a treasure worth seeing. Called the Crown of the Continent, one of its greatest natural resources is a dark night sky. https://www.nps.gov/glac/index.htm

One thing is for sure when it comes to Montana is its people. Whether you’re seeking dinosaurs, the history of Blackfeet or Nez Pierce, a real working ranch, the people of Montana are as genuine as the land they live on.

Join National Day Calendar® as we celebrate the 41st state to join the union. Explore the history and people of Montana. Follow the trails of the pioneers and visit all the treasures this great has to offer. Use #NationalMontanaDay to share on social media.

In 1916, Jeannette Rankin became the first woman elected to Congress. She ran for office before most women could cast a ballot. However, Montana voted in favor of equal suffrage in 1914. As a suffragist, Rankin’s efforts factored considerably in the passing of Montana’s legislation and as Representative Rankin when Congress passed the 19th Amendment.

Scarlet fever left John L. Clarke without hearing or vocal chords at the age of two. What the disease took away from Clarke was replaced with an artist’s touch. Clarke was 3/4 Blackfeet Indian and learned to carve and sculpt while attending schools for the deaf. His keenly detailed depictions of wildlife have been displayed in the Oval Office and exhibited around the world.

Known as the “Daughter of Montana” and adopted by the Blackfoot Nation, Elizabeth Davey Lochrie traveled rural Montana painting evocative portraits of the Native Americans who lived there. Her breathtaking murals captured the beauty and ruggedness of Montana frontier life.

Gary Cooper appeared in more than 80 films during a career that lept from silent movies to sound almost effortlessly. He was nominated for his first Academy Award in 1937 for his role in Mr. Deeds Goes to Town. Cooper would go on to earn two Best Actor Academy Awards for Sergeant York (1942) and High Noon (1953). In 1961, the Academy presented him with an honorary award for his career achievements.

Best known for her role as Nora Charles in the Thin Man film series, Myrna Loy began her career in silent movies. Despite her incredible 129 film credits, she never received an Academy Award nomination. The Academy of Motion Picture Arts and Sciences did honor Loy’s contributions both to film and humanitarian efforts.

Chet Huntley began his career in radio, but soon found his way to NBC reporting the news alongside David Brinkley. Together they covered political races, military conflicts, and earned industry awards.

From vaudeville, the Broadway stage to film, television and USO tours, Martha Raye’s comedic talent joined up with Charlie Chaplin, Bob Hope, and Jimmy Durante, just to name a few.

Noted paleontologist, Jack Horner, has made several contributions to the paleontological community. From the discovery of new dinosaurs and their behaviors to publishing numerous articles, books, and children’s books.

Our Lady of the Rockies – Butte