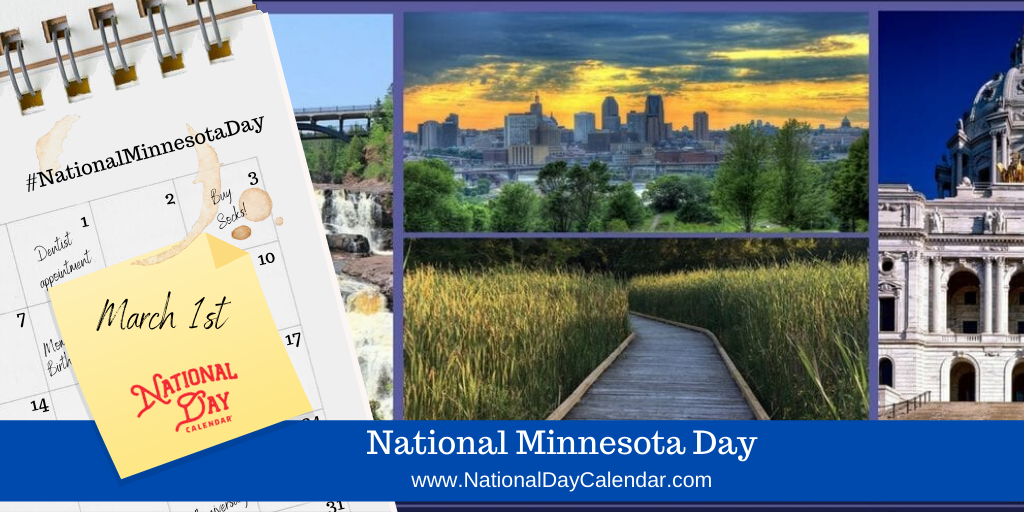 On March 1st, the Land of 10,000 Lakes is recognized on National Minnesota Day.

Minnesota joined the union on May 11, 1858, making it the 32nd state in the United States, and it shares its northern border with Canada. Angle Township on the north edge of Lake of the Woods makes Minnesota the northernmost state of the continental forty-eight. Also known as the Gopher State, it extends along the northern shore of Lake Superior.

Dakota Sioux and Ojibwa, Menominee, and other tribes populated the area when the first Europeans began to explore and later settle the area. Fur trading in the densely wooded territory led to French treaties in the late 17th century.

The Mississippi River divides a portion of the state; its source is Lake Itasca. This natural boundary also divided the region when the Treaty of Paris determined United States’ western border after the Revolutionary War. Minnesota would not become whole until 1836 when it became part of the Wisconsin Territory, 33 years following the Louisana Purchase.

The state capital of St. Paul, once called Pig’s Eye Landing, was founded in 1838 along the Mississippi River and was named the territorial capital in 1849.

Head north along Lake Superior into the Arrowhead Region where the air stays cooler longer and the lake effect will have real meaning. Duluth and points north with an industrial history benefit from mild summers, access to clear summer nights, Aurora Borealis, and unspoiled views.

Advertisement
For a complete list of Minnesota State and National Parks & Historic Sites visit www.dnr.state.mn.us/state_parks and www.nps.gov. Check out a few of the featured sites around the state below. Born with the name Hakadah to a full blood Sioux father and raised in the tribe’s homeland, Charles Eastman experienced the life of a warrior, hunter and nomad, until he was 15 years old. His father Jacob (Tawakanhdeota) Eastman would set him on a path toward white customs, educations, and religion. Charles Eastman would become a physician, author, and lobbyist for Native Americans across the country.

Best known as the founders of the Mayo Clinic, William and Charles Mayo were exposed to the medical field at a young age through their experiences with their physician father. Both became surgeons with expertise in many methods and procedures.

The prolific satirical author and playwright, Sinclair Lewis earned both a Pulitzer and Nobel Prize, the first awarded to an American for literature. Lewis declined the Pulitzer for Arrowsmith on the grounds his works took a more saccharine view of the middle class than the wholesome outlook the award seem to call for.

A one-time railroad station agent, Richard W. Sears started his own mailorder watch company in 1886. By 1893, Sears, Roebuck and Co. was established.

The author of This Side of Paradise, The Beautiful and the Damned and The Great Gatsby, F. Scott Fitzgerald rose quickly in literary circles. He would struggle to survive the Great Depression and his wife’s Zelda’s condition.

Artist and author, Wanda Gag is best known for her children’s book Millions of Cats. Her illustrations, lithographs and woodcuts earned her recognition by The American Institute of Graphic Art.

While working for 3M, Richard Gurley Drew invented masking and cellophane tape. He created the tape from cellulose and originally called it cellulose tape. His career started at the 3M company in 1920 in St. Paul, Minnesota, where he developed a masking tape for the automotive industry in 1925.

Robert Mondavi dedicated his career to creating wines that competed with the best in the world. He built his business in the Northern California Napa Valley where vineyards flourish today.

Toni Stone became the first woman to play professional baseball when she was signed to the Negro American League’s Indianapolis Clowns in 1953. For the Clowns, she played second base and maintained a respectable .243 batting average. In 1991, Stone was inducted into the Women’s Sports Hall of Fame.

Born Frances Ethel Gumm, Judy Garland sang, danced and performed from a young age. Her exceptional voice, endearing personality and perfect comedic talent made her an immediate success in the hearts of America. Best known for her roles in the Wizard of Oz, Meet Me in St. Louis and Ziegfeld Follies, Garland will always be remembered for her rendition of Somewhere Over the Rainbow.

The cartoonist who created Peanuts, Charles Schulz also brought us the full cast of characters. From Charlie Brown and Snoopy, Woodstock to Sally and Schroeder, Lucy, Peppermint Patty, Marci and Pig-Pen there is someone in the gang we identify with, and Schulz brought them to life.

Known for his record-breaking 61 home runs in 1961 while playing for the New York Yankees, Roger Maris’s record would stand for 37 years. The final two years of his career would be with the St. Louis Cardinals where he would end his career on a high note, winning his seventh World Series. In 1998, St. Louis Cardinal Mark McGwire and Chicago Cub Sammy Sosa would both surpass Maris’ record.

An injury early in his NFL career didn’t keep John Madden from realizing his dreams in the professional world of football. Madden would persevere and be named as head coach for the Oakland Raiders, demanding respect and chalking up wins. After coaching, he continued his love of the sport through broadcasting.

Since the early 1960s, Bob Dylan’s unique style of folk music has gained the respect and influenced artists across genres. The eleven-time Grammy-winning artist earned the Nobel Prize in Literature in 2016.

Ann Bancroft earned the title of the first woman to reach the North and South poles. She’s continued to explore, break records, educate and inspire through her expeditions.

With hits like “When Doves Cry” and “1999,” Prince earned a pop music and R&B reputation that was undeniable. Both as an artist and entertainer, the seven-time Grammy winner delivered stellar performances time after time.