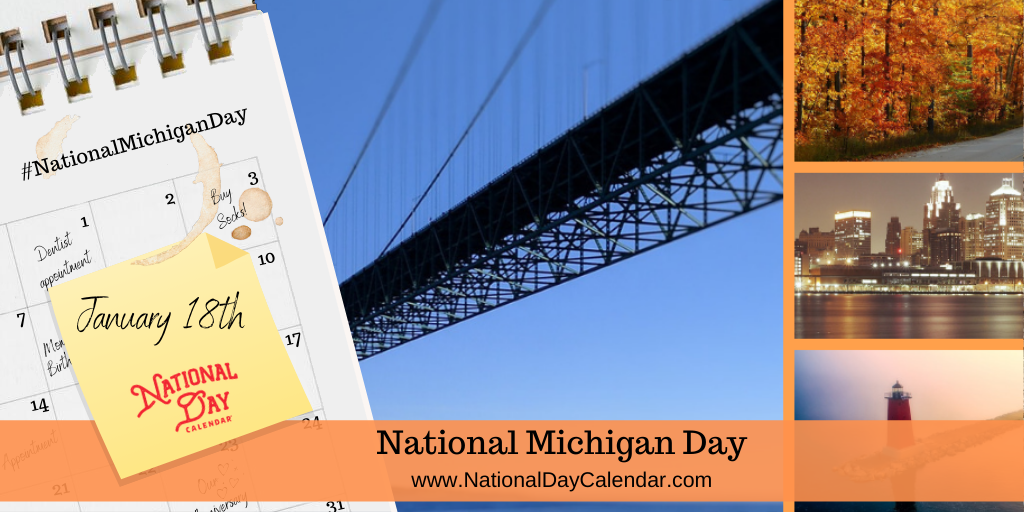 Surrounded by four of the five Great Lakes, Michigan has more shoreline than any of the contiguous 48 states. Of the 50 states, only Alaska has more.

First explored by the French, the area became a U.S territory in 1783.  Flush with iron and copper, Michigan would become a center of industrial activity.

Lake Michigan separates the upper and lower peninsulas of the 26th state granted statehood, making Michigan unlike any other in design.  To move from one peninsula to the other, ferries used to carry travelers back and forth.  But in 1957, the Mackinac Bridge connected the two sides making the journey more convenient and safer.  At 26,372 feet long, it is the third longest suspension bridge in the world.

Industry dominated the early 20th century in Michigan. From logging, shipping, rail and automotive, the population grew with an influx of workers during war and peacetime. Influenced by skilled trades, engineering, and manufacturing, employment exploded.

After the bombing of Pearl Harbor in 1941, assembly workers were in high demand all across the country. The Willow Run plant in Ypsilanti, Michigan built B-24 Bombers. As the epicenter of the automobile industry, Michigan was ripe for the increased production.

One of the Willow Run factory workers became a Rosie the Riveter spokesperson wearing the iconic bandana and flexing her muscle to sell war bonds. Rose Will Monroe’s efforts, as well as thousands of other women in Michigan and across the country, changed the course a war and the image of women for generations.

Known for its Motown sound and legendary music makers, Michigan and Detroit launched some of the most memorable names in jazz and gospel music.  From Smokey Robinson and Diana Ross to the Jackson 5 and Stevie Wonder, the birth of Motown was the launching of an era.

For a complete list of Michigan State and National Parks & Historic Sites visit www.michigandnr.com and www.nps.gov. Check out a few of the featured sites around the state below. While the horseless carriage was invented in Germany and France, Michigan laid claim to production, design, and innovation earning Detroit the Motor City nickname Motown.

Attracted to the machine industry and availability of shipping to large metropolitan areas of Chicago and New York by rail and water, Michigan made an ideal place to set up shop. Businessmen like Henry Ford and Ransom Olds didn’t have far to go; they were born in the great state of Michigan. Others made their way to the Great Lake State from as near as New York and as far as Europe. Those with names we recognize today. Businessman, machinists, inventors, and designers. Horace and Elgin Dodge, Henry M. Leland, Louis Chevrolet, William C. Durant, David Dunbar Buick.

Hits by Stevie Wonder, the Miracles, Martha and the Vandellas, the Supremes, the Jackson 5, and many others developed a sound that became known as Motown.

Motown helped launched the careers of Diana Ross, Smokey Robinson, Michael Jackson and many others.

Pontiac rallied tribes from around the Great Lakes region to resist British encroachment. His persistence and planning were successful for a time.
Noted playwright and author, Edna Ferber earned a Pulitzer Prize in 1924 for her novel So Big. Set in Chicago at the turn of the 20th Century, her main character strives to survive through the challenges of being a gambler’s daughter.
Most known for completing the first solo and first non-stop transatlantic flight, Charles Lindbergh achieved the feat in the Spirit of St. Louis in 1927 at the age of 25.

His historic flight took off from Roosevelt Field outside New York City and ended at Le Bourget Field near Paris, France.

In 1969, Alfred Hershey earned the Nobel Prize in Physiology along with Max Delbrück and Salvador Luria for their genetic research on bacteriophages.
Cardiothoracic surgeon, Norman Shumway, performed the first successful human heart transplant in 1968. Known as the father of heart transplantation, Shumway, performed the procedure at Stanford University School of Medicine.
From a talented jazz and gospel performer in the late 1960s to her own talk show and acting roles in television and film, Della Reese found success across seven decades.
Award-winning director, writer and producer, Francis Ford Coppola, brought memorable films to the big screen during the 1960s and 70s including The Godfather series, Patton and Apocolypse Now.
At the age of 16, Robert Heft designed the current 50-star flag as part of a class project in anticipation of the admittance of Alaska and Hawaii to the union. Upon completion, Heft sent the flag to Ohio congressman, Rep. Walter Moeller to submit the design to Congress for consideration. Heft’s design was approved because he submitted the only sewn design.
The director who made the brat pack a household name, John Hughes launched the careers of 80s actors like Molly Ringwald, Anthony Michael Hall, Rob Lowe, Demi Moore, Emilio Estevez, Matthew Broderick, and Mary Stuart Masterson.
Alexa Canady became the first woman African American neurosurgeon in the United States. Overcoming obstacles and persevering, Canady focused her specialty in pediatric neurosurgery.  Canady has filled a need for pediatric neurosurgeons at a time when the field has a shortage.
Point guard for the LA Lakers, Earvin “Magic” Johnson played for 13 seasons. Johnson earned five NBA championships and three MVPs. In 2002, Johnson was inducted the Naismith Memorial Basketball Hall of Fame.