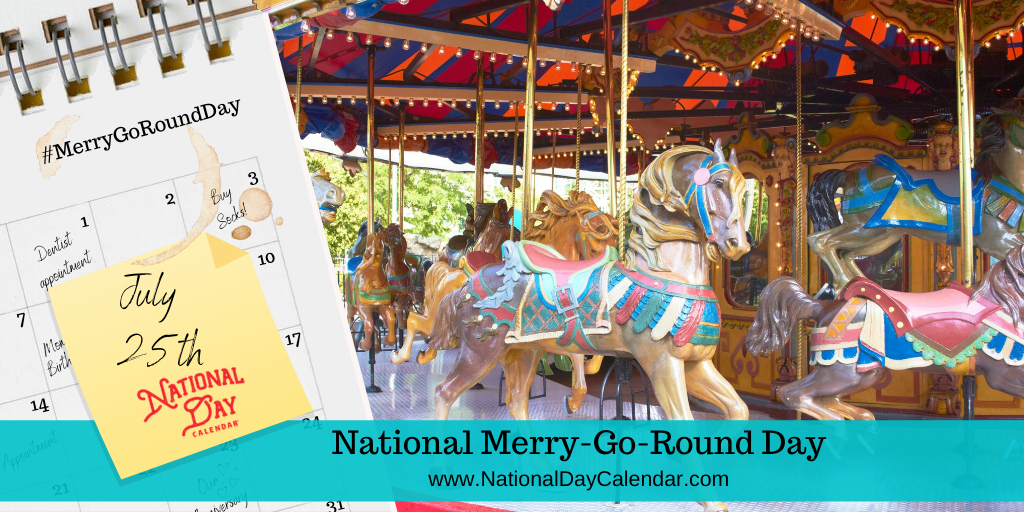 National Merry-Go-Round Day on July 25th recognizes the amusement ride associated with carnival music. Invite a friend. Pick your horse or tiger take one for a spin!

Along with the roller coaster, the merry-go-round is one of the oldest amusement rides. Also known as the carousel, the merry-go-round rotates on a circular platform around a pole. The platform holds seats for riders. A motor spins the platform around the large central pole. Between rows of seats, passengers ride wooden horses and other animals. Poles anchor the animals in place. Once in a while, the colorful animals move up and down. The movement simulates galloping. Meanwhile, calliope music plays, adding a light-hearted atmosphere.

Often, carousels name their horses. The names add personality to the horses and bring them to life. Undeniably, names like Galloper, Jumper, and Roundabout became favorites among riders. While horses dominate the carousel world, lions, tigers, and many other exotic animals fill the platforms, too.

Not only are carousels fun to ride, but each one is unique. Artists carve each animal, bench, or car passenger ride. Ornately detailed elements decorate the poles and canopy of every carousel. What’s more, there was no limit to their imaginations! Ferocious tigers and docile lambs carry riders around. All the while the music plays its lilting tune. Undoubtedly, no two carousels are alike.

Besides carousels, any rotating platform may also be called a merry-go-round. By comparison, children power the playground merry-go-round. They push off using the bars or handles. The riders cling to the same bars as the platform spins. Since the riders determine the speed, the harder they push, the faster they go. Not surprisingly, one of the thrills of riding the merry-go-round included becoming dizzy.

Go find a merry-go-round and have fun. Visit your favorite carousel and take a spin. Of course, you can always introduce the next generation to carousels, too. Post on social media using #MerryGoRoundDay.

In 2014, Bette Largent, President of the National Carousel Association, and carousel historian, Ronald Hopkins founded National Merry-Go-Round Day. They created the day to shine a spotlight on these beautiful, historical creations. The date commemorates the first U.S. patent issued in 1871 to William Schneider of Davenport, Iowa for the modern carousel.