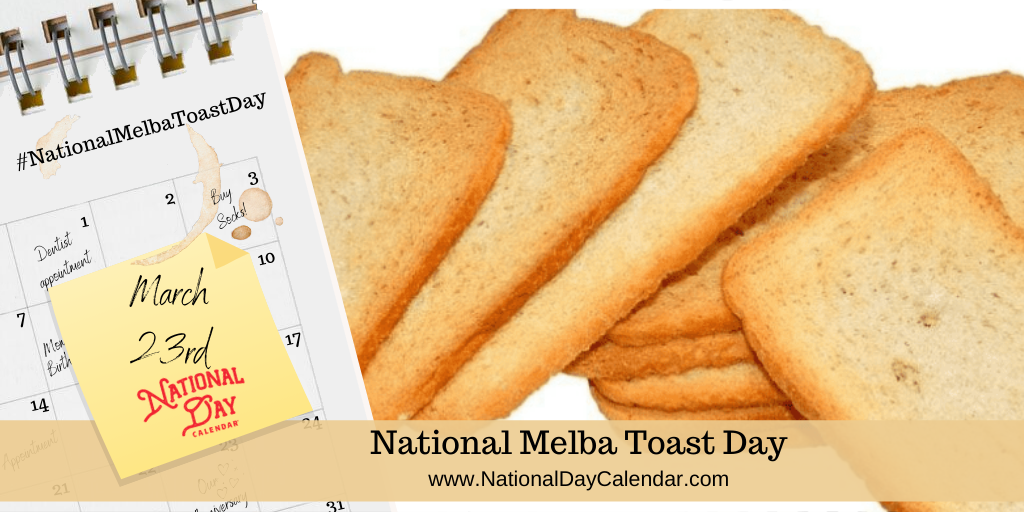 March 23rd recognizes National Melba Toast Day, a food holiday. Melba toast is a dry, crisp and thinly sliced toast. It is sometimes served with salad or soup or may be eaten plain or with a topping.

Chef Auguste Escoffier of the Savoy created Melba toast. He named it after Dame Nellie Melba, the stage name of the Australian opera singer, Helen Porter Mitchell. The singer was quite popular with the chef. He created not just this diet toast for Ms. Melba, but a famous dessert as well – Peach Melba.

Over the years, chefs and cooks have developed recipes for Melba Toast because it’s such an excellent canvas to build appetizers. The sturdy toast holds up well and adds to a beautiful canapé plate. Top it with a variety of spreads, paté, fruits, and vegetables, it makes for a delicious and elegant service.

Another useful benefit of Melba toast’s firmness is it doubles as a teething biscuit for infants when they reach an age old enough to chew.

Q. How many calories are in Melba toast?
A. A serving of three Melba toasts contains approximately 60 calories.

Q. Are Melba toast and zwieback toast the same thing?
A. No, but they are similar. The primary difference between the two types of toast is that zwieback is sweeter than Melba toast.

March 23rd Celebrated (and Not So Celebrated) History

The British survey ship, H.M.S. Challenger discovers the deepest known region of the Earth’s oceans when it made its first sounding of the Mariana Trench. The discovery was made during the ship’s global oceanographic expedition.

After 15 years orbiting the Earth, the Russian space station Mir came to an end when it burned up in the Earth’s atmosphere. The strategic destruction of the first modular space station was a coordinated effort, with communications provided to island nations, ships, and planes in the debris zone over the Pacific Ocean.

March 23rd Celebrated (and Not So Celebrated) Birthdays

On November 2, 1920, Florence Ellinwood Allen became the first woman in the United States elected to a judicial office. She was elected to the judgeship of the Cuyahoga County Court of Common Pleas. But she wouldn’t stop there. In 1934, President Franklin D. Roosevelt nominated her for the U.S. Sixth Circuit Court of Appeals for which the U.S. Senate unanimously approved. Allen became the first woman appointed and confirmed to a federal appeals court judgeship.

In 1896, the American culinary expert published The Boston Cooking-School Cook Book. Farmer immersed herself in the education of cooking and opened her own school – Miss Farmer’s School of Cookery.

The German-born aerospace engineer was a leader in rocket development in the early stages of space exploration. During World War II he was instrumental in the development of V-2 ballistic missiles used by the Nazis. Braun and his team would surrender to Americans before the end of the war and through Operation Paperclip, many of them came to the U.S., including Braun.

A single typo used to ruin an entire page. Wads of paper could fill wastebasket, hunting and pecking resume at the typewriter attempting to get it right. Until one day in 1951 when types Bette Nesmith Graham created a white fluid that she could brush onto the paper. Once dry, the experienced typist could retype the correct letter, word, or phrase. Her invention? Liquid Paper.

In 1984, Dr. Robert Gallo and researchers at the Pasteur Institute in Paris discovered the human immunodeficiency virus (HIV).