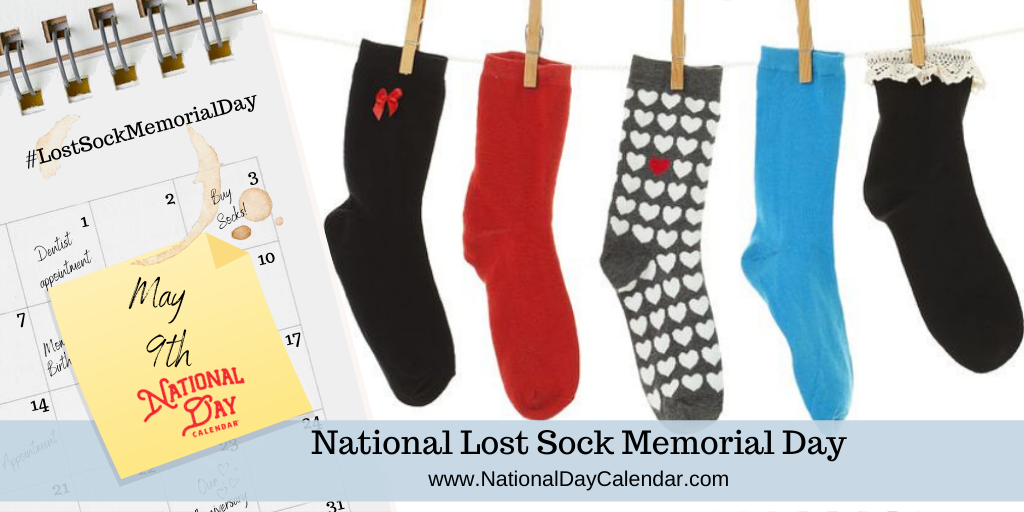 May 9th recognizes a fun and unique holiday, National Lost Sock Memorial Day. It is time to say “good-bye” to all of the single socks, the ones where their mates have been lost to the unknown. Where do all the missing socks go? Is there a washing machine heaven? This is a question people have been trying to solve for many centuries.  An answer may never be found to this problem, and life will go on.  How sad to have lost such a close-knit friend!

Of course, since before the dawn of Tupperware, inventors have attempted the prevention of such separation anxiety. Alas, if they had succeeded, mismatched socks wouldn’t be popular today. And, we there wouldn’t be pausing to remember them every May 9th.

National Lost Sock Memorial Day reminds you that it’s time to move on. Let go of those lost socks. Clean out all of your left behind socks. Some ways to celebrate this unusual holiday include:

What are some creative ways to use old socks? Share your ideas and say your final goodbyes to your lost socks using #LostSockMemorialDay.

May 9th Celebrated (and Not So Celebrated) History

The U.S. Patent Office issued patent No. 257,487 to William F. Ford for his invention of a stethoscope. His design improved upon previous designs by reducing noise unrelated to the examination.

The U.S. Patent Office issued patent No. 624,749 to John Albert Burr for his invention of a rotary blade lawnmower.

President Woodrow Wilson signs a proclamation declaring the second Sunday in May to be Mother’s Day.

MIT researchers bounce a beam of light off the surface of the Moon for the first time. Raytheon made the laser for the MIT Research Laboratory in Cambridge. The returning beams were captured on a receiver and recorded on a cathode ray tube as tiny flashes on a screen.

May 9th Celebrated (and Not So Celebrated) Birthdays

As the 16th First Lady of the United States, the young niece of James Buchanan performed the hostess duties in the White House. While she’s not the only relative to step into the role of First Lady, Lane is the only one to do so for the only lifelong bachelor to become president.

At a young age, Belle Boyd became a Confederate spy during the Civil War. She gained a notorious reputation for her daring.

In 1904, the Scottish playwright produced the popular play “Peter Pan; or The Boy Who Would Not Grow Up.”

In 1922, the English archaeologist and Egyptologist discovered the tomb of Tutankhamun. The tomb of the 18th Dynasty Pharaoh was the best-preserved tomb of a pharaoh ever found in the Valley of the Kings.

The American broadcast journalist was one of the pioneering hosts of the CBS show 60 minutes.

The distinguished NASA astronaut flew four space missions during his career. One of his most historic missions included the first meeting in space between American astronauts and Soviet cosmonauts during the Apollo-Soyuz Test Project in 1975. During the mission, Tom Stafford and Deke Slayton joined Brand aboard Apollo. Aleksey Leonov and Valeriy Kubasov crewed the Soyuz.