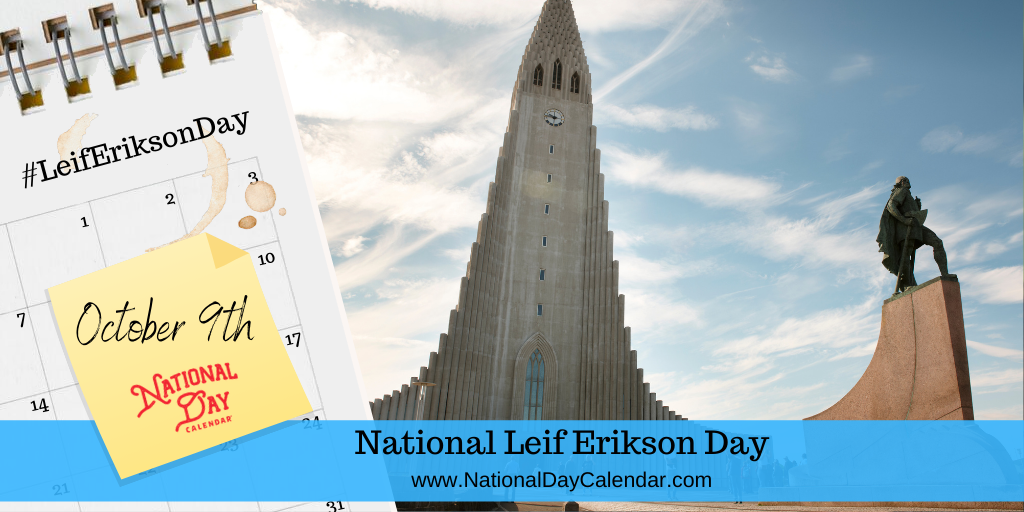 National Leif Erickson Day honors the Icelandic-born explorer, Leif Erikson. The Norse explorer earns credit for bringing the first Europeans known to have set foot in North America. Leif Erikson left the European continent in 999 and landed in North America around the year 1,000.

Tour a Norwegian heritage museum. Learn about Norse heritage, their exploration, and more. Dive into the story of this explore in books, too. We suggest Who was Leif Erikson by Nico Medina or Before Columbus: The Leif Eriksson Expedition by Elizabeth Cody Kimmel. Share your Norse heritage. However you celebrate, use #LeifEriksonDay to post on social media.

In 1925, at the Norse-American Centennial, President Calvin Coolidge gave recognition to Leif Erikson as the discoverer of America due to research by Norwegian-American scholars such as Knut Geirset and Ludvig-Hektoen.

United States Representative John Blatnik from Duluth introduced a bill in 1963 to observe Leif Erikson Day nationwide. On September 2, 1964, the United States Congress passed Joint Resolution 88-566, authorizing the President to proclaim October 9 as Leif Erikson Day. President Lyndon B. Johnson and each president since have done so. In the proclamations, the Presidents have praised the contributions of Americans of Nordic descent generally and the spirit of discovery.

Some states officially commemorate National Leif Erikson Day in addition to the federal observance. This occurs particularly in the Upper Midwest, where there are large numbers of people from the Nordic countries settled.

On October 9, 1825, a sloop named, Restauration, with 52 Norwegian Quakers on board, landed in New York Harbor, beginning what would become the first organized immigration from Norway to the United States. In commemoration of their journey and their exploring ancestor, Congress selected October 9 for National Leif Erickson Day.

Q. Was Leif Erikson Norse?
A. While the first-century explorer is believed to be born in Iceland, his ancestors hailed from Scandinavia, so he was of Norse descent. His father, Erik the Red was born in Norway.

Q. Do Norse, Nordic and Norwegian mean the same thing?
A. Yes and no. Norse refers to people and things from Scandinavia. Nordic refers to northern Europe. Norwegian is specific to the country Norway. So, something Norwegian can also be Nordic and Norse.

October 9th Celebrated (And Not So Celebrated) History

Joshua C. Stoddard obtains patent No. 13,668 for his invention of the steam calliope. The Worcester, MA inventor equipped the “steam organ” with whistles and when steam was forced through them, they played a note. He later added a keyboard. The musical instrument became associated with riverboats and carnivals, particularly on the carousels.

The American distiller who founded Jack Daniel’s distillery dies. Born Jasper Newton Daniel, he is best known for his Tennessee whiskey. Daniels learned to make moonshine at a young age and founded the Jack Daniels Distillery in 1875.

The Draconid meteor shower surprised Europe with a short but intense display. Caused by the passing of the Giacobini-Zinner comet leaving debris in its 6.6-year orbital path, the comet’s displays vary depending on where the Earth is in relation to the comet’s debris path. In 2020, the comet returns, but whether it will be a display of hundreds of meteors an hour or just a few remains to be seen.

The Simmons Company begins selling electric blankets. Based out of Petersburg, VA, the manufacturer’s ads tout the product as the “New Way to Better Sleep!” The blanket connected to a control device that users set on their bedside table. The price? $39.50.

London’s Royal Albert Hall hosted the first sumo wrestling tournament held off of Japanese soil in the 1500 year history of the sport.

Data from the Lunar CRater Observation and Sensing Satellite (LCROSS) detects water on the moon for the first time.

October 9th Celebrated (And Not So Celebrated) Birthdays

The right-handed infielder was a batting powerhouse in the All American Girls Professional Baseball League. In her fourth and last season with the Rockford Peaches, she had a batting average of .280. That year in the MLB the league batting average was .261.

The Nobel Prize-winning physicist pursued his Ph.D. in science following his military service. Along with Charles Slichter, he advanced nuclear medicine with the development of the MRI.

The one-time wrestler and restaurateur founded the Japanese restaurant, Benihana, in 1964. The restaurant is also the founder of National Fried Rice Day.

The founder and co-lead vocalist of the Beatles would later become a peace activist. Married to Yoko Ono, he shares a birthday with his son Sean. In 1980, Lennon was assassinated by Mark David Chapman.

The now solo artist and producer was once part of the girl trio which included Patti LaBelle and Sarah Dash. In the late 60s and 70s, the group rose to fame with hit songs such as “Lady Marmalade” and “What Can I Do For You.” They were also the opening act for groups such as The Who and The Rolling Stones. After the trio broke up, Hendryx went on to a successful solo and producing career.

Singletary played 12 years with the Chicago Bears. The linebacker would continue his NFL career when he joined the coaching staff of the Baltimore Ravens. He would later coach for other teams, too, such as the San Francisco 49ers, Minnesota Vikings, and Los Angeles Rams.

The director, producer, and screenwriter rose up through the ranks of Hollywood with films such as Labyrinth, Hellboy, and The Shape of Water.