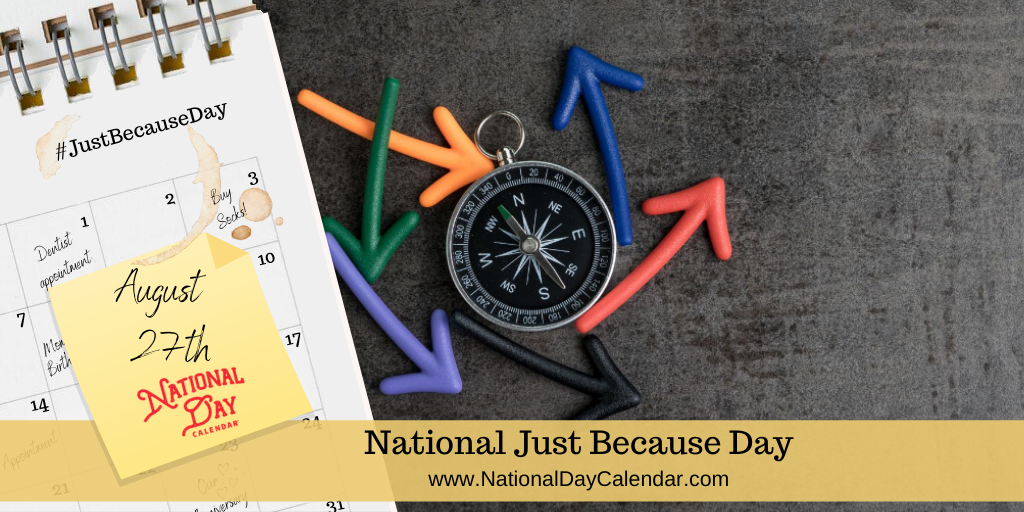 On August 27th, National Just Because Day offers up an opportunity to do stuff…just because. So feel free to celebrate this day any way you choose.  Just because!

Every day we all do things that are expected or required of us. Sometimes we even do things because we have to do them; we don’t know why.  Well, on this occasion, that does not apply.  This day is a chance to do something without rhyme or reason.

Do something just because. Sometimes, we need to say things just because. We have 11 Things to Say…Just Because right here. Use #JustBecauseDay to post on social media.

When is National Shower With A Friend Day?

Educators, taking the Just Because Day theme to heart, visit the National Day Calendar Classroom for ways to use this day in your classroom, just because.

In the late 1950s, Joseph J. Goodwin of Los Gatos, California, created Just Because Day. It began as a family holiday and grew into an annual celebration across the United States.

August 27th Celebrated (and Not So Celebrated) History

After nearly a year of drilling, Edwin Drake strikes oil near Titusville, PA. The well is the first successful commercial oil well in the United States.

Nestle registers the trademark for Toll House for the first time in preparation for marketing Ruth Wakefield’s chocolate chip cookies.

Roman Holiday starring Gregory Peck and Audrey Hepburn is released in the U.S.

Students Norris and Ross McWhirter publish the Guinness Book of World Records for the first time.

Alice Waters, restaurateur and food activist, opens the French restaurant Chez Panisse. The restaurant on Shattuck Avenue in Berkeley, California continues to operate with a menu of fresh ingredients, entrees, pasta and pizza.

Hasbro hosted the world’s largest and simultaneous game of Monopoly. In 21 locations around the world, 2918 people played the popular board game. No word on how many game boards were tossed in angry defeat.

August 27th Celebrated (and Not So Celebrated) Birthdays

The businessman and banker was elected as the 30th Vice President of the United States when he ran with Calvin Coolidge in 1924.

The English novelist is known for The Hornblower series as well as The Good Shepherd and The African Queen.

Johnson was the 36th President of the United States, completing the term of John F. Kennedy after he was killed by an assassin.

Best known for his character Pee-wee Herman, the performer is also a comedian, writer and producer.

The actor is best known for his role as Jesse Pinkman in the television series Breaking Bad.