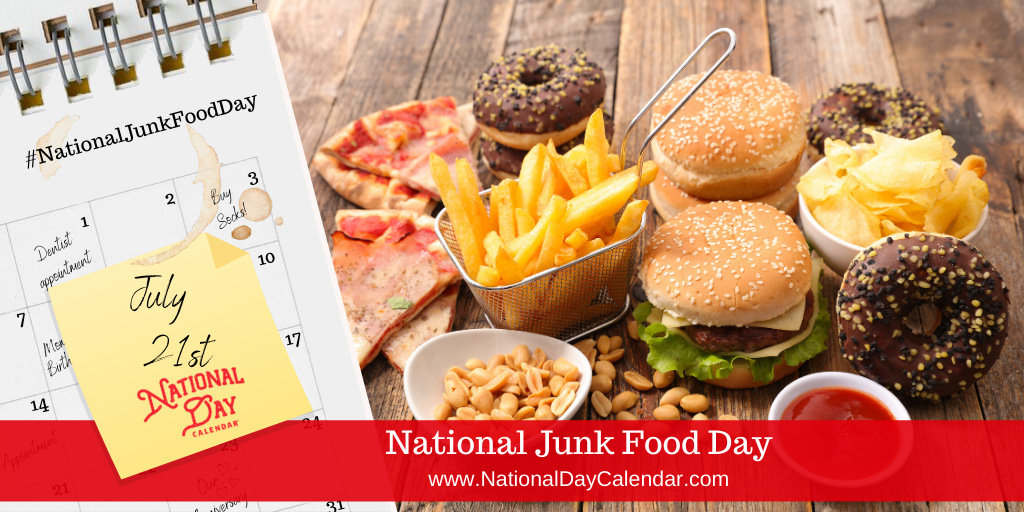 July 21st dedicates a giant menu of items to National Junk Food Day. Each year, the day permits us to chow down on the foods we usually don’t include in our daily diet. Junk foods, by definition, typically contain high fats, sugars, salt, and calories and very little nutritional value.

With the advent of packaged foods during the late 1800s, junk food made its way into American life. Still, home-cooked meals remained the standard for several more decades. Eventually, after World War II, the artery-clogging industry took off. Since the population ate out more, traveled more, the industry was primed to produce products at an increased rate.

From the frozen food aisle to fast food chains, a myriad of choices for consumers flooded the market. Potato chips, baked goods and so much more filled supermarket shelves, prepackaged and ready to go.

By the 1970s, junk foods earned a name and a bad one, too. Michael Jacobson, a microbiologist, is credited with coining the phrase. He also set out to curb our appetite for the high sugar, high salt, high preservative foods Americans consumed at an alarming rate.

While deep-fried, fat-laced foods increase our waistlines, cholesterol, and blood sugar numbers, an occasional indulgence shouldn’t impact a healthy, diverse diet and lifestyle. Also, producers make healthy versions of our favorite junk foods to entice us to enjoy a little.

Snack a little. Chow down on your favorite chip, dip or treat. In fact, treat the family or workplace to a beverage or take out. If you’re looking for some international snacking flair, check out 24 Snacks from around the World. Post on social media using #NationalJunkFoodDay. You can also celebrate by taking a walk or doing some yard work to burn off those extra calories.

We were unable to identify the origin of National Junk Food Day.

July 21st Celebrated (and Not So Celebrated) History

Aboard the Mercury – Redstone 4, Virgil “Gus” Grissom became the second American to fly in space.

The Hollywood Walk of Fame commemorates Mohawk actor, Jay Silverheels, with the first star on the walk of fame received by a Native American.

July 21st Celebrated (and Not So Celebrated) Birthdays

The American author and journalist wrote several novels and non-fiction that are considered classics today, such as For Whom the Bell Tolls and The Old Man and the Sea. In addition, many of his works were published posthumously, including A Moveable Feast.

On June 2, 1886, Frances Clara Folsom became the youngest First Lady in U.S. history when she married sitting President Grover Cleveland. It was the only wedding of a president that took place in the White House. She also has the unique distinction of being both the 23rd and 25th First Lady of the United States.

The first woman to serve as the United States Attorney General, Janet Reno, was appointed to the office in 1993 by President William Clinton. She served until 2001.

During the American actor and comedian’s nearly 40-year career, Robin Williams created many memorable characters. From the sitcom Mork & Mindy (for which he won a Golden Globe) to films like Jumanji, Hook and Awakenings, Robins left an indelible mark on his fans and the industry. He won an Academy Award for his role in Good Will Hunting.