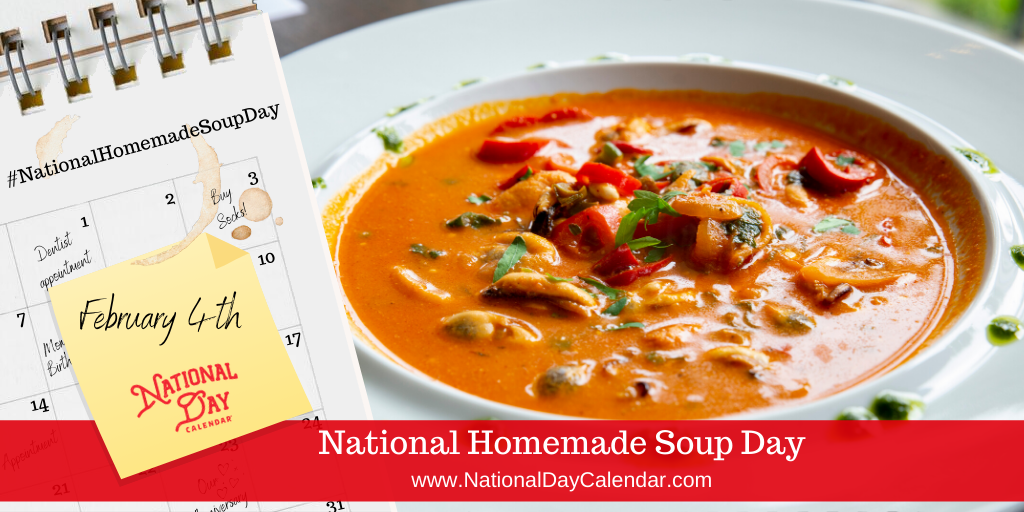 February 4th heats up with National Homemade Soup Day. In every cuisine, soup provides a rich basis of flavor and history.

Before the era of modern transportation, soup was a product of regionally available foods. For this reason, there are thousands of soup recipes available today.

Many soups also offer medicinal properties. What was once considered a wive’s tale, chicken soup now has the backing of the scientific community. Yes, chicken soup helps relieve the symptoms of the common cold. How? Well, scientists believe that a bowl of soup may reduce inflammation of the lungs. It is thought that chicken soup slows down the activity of white blood cells that can cause inflammation.

But that’s not all homemade soup does. Every cook knows the most important ingredient that goes into every pot of simmering soup. They keep the ingredient stored where it will do its best work, too. As they work, they season the soup from their heart giving it just the right amount of love each and every time. Whether they add it with the noodles or the vegetable, the broth or the cream, each cook knows there’s enough to go around. That’s why homemade soup heals the best.

Tell us about your favorite homemade soup. Share a recipe or a memory. Gather the family to learn how to make your best recipe and share the love. Need a new recipe to add to your collection? From chowders and broths to creamy bisques, National Day Calendar® found a few recipes to give a try on National Homemade Soup Day.

National Day Calendar continues searching for the origins of this warm-hearted holiday. But we’re pretty sure someone who seasoned everything with love had a hand in it.

Q. What kinds of broth are used in homemade soup?
A. Home cooks use a variety of broths for the base of their soups. Consider using vegetables, chicken, beef, pork, or other meat to create your broth. Adding milk or cream will create a creamy soup.

Q. Can I use store-bought broth to make a homemade soup?
A. Yes! Though homemade broth is delicious, you can cut down some of the time and effort by using canned or box broth.

Q. Is making homemade broth easy?
A. It really isn’t that difficult to make homemade broth. For example, chicken broth can be made from leftover chicken. Be sure to include the bones and vegetables such as carrots, celery, and onions for additional flavor. Try this simple recipe to start.