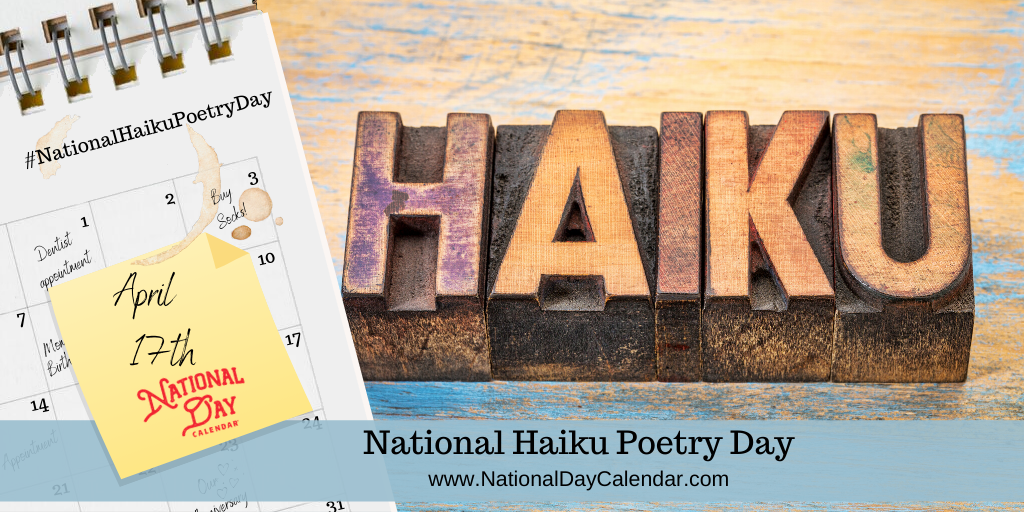 Observed annually on April 17, National Haiku Poetry Day encourages all to try their hand in creativity. Haiku poetry is a form of Japanese poetry that is non-rhyming and usually consists of 3 lines with a syllable pattern of 5-7-5. Usually, an element of nature, a season, a moment of beauty, or an individual experience inspires haiku poems. Sensory language is used to capture a feeling, image, or moment.

Whitecaps on the bay:
A broken signboard banging
In the April wind.

As one of the world’s oldest and regularly used poetry, some recognizable poets wrote many haiku. While the most well-known is Matsuo Basho, others we may recognize are William Blake, T.S. Eliot, or Maya Angelou. And as small as the poem may be, it can be quite challenging to write. Try capturing an entire moment or emotion in 17 syllables and getting it right.

However, English haiku does not always follow the strict syllable count found in Japanese haiku. The typical length of haiku in English language journals is 10-14 syllables versus the 5-7-5 syllables used in the Japanese language.

Sari Granstaff registered National Haiku Poetry Day in 2007, and The Haiku Foundation implemented the day as a project in 2012.

Q. Does haiku have to rhyme?
A. No. While haiku poems usually don’t rhyme, they do incorporate elements of poetry such as rhythm, emotion, and occasionally rhyme.

Q. Is a haiku always about nature?
A. No, but usually there is some element of nature included in the poem. Haiku is usually inspired by nature. However, some poets draw from the haiku style for more industrial types of poems.