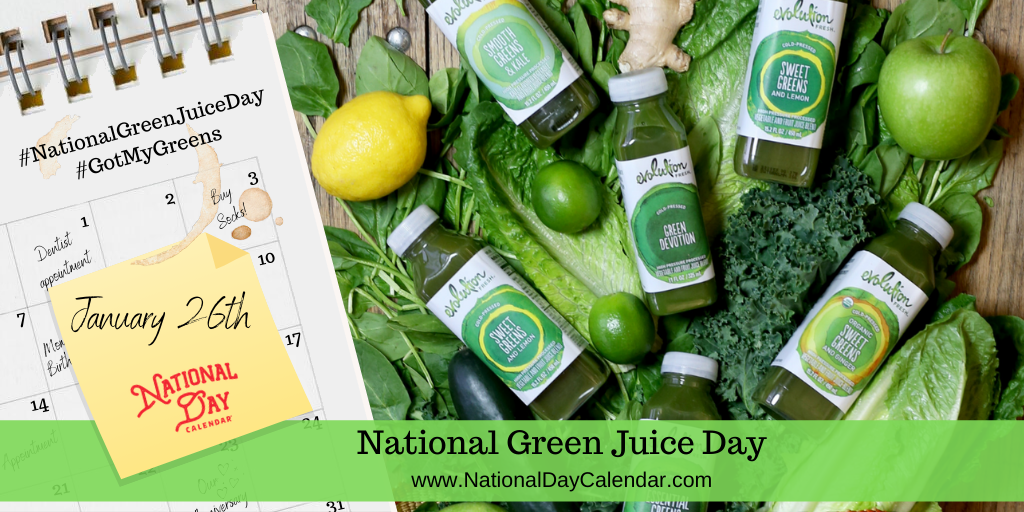 The holidays may be over, but the New Year celebration and commitments to our resolutions continue with National Green Juice Day on January 26th. Every year, the celebration encourages people to stick to their health and wellness resolutions by drinking a green juice.

Click play and enjoy a story about National Green Juice Day featuring our founder, Marlo Anderson.  If you enjoy the 2-minute show, subscribe with your favorite podcast player.

There are several veggie-centric ways to celebrate and inspire health and wellness habits in the New Year.

After finding that more than 50 percent of Americans break their New Year’s resolutions by the end of January*, Evolution Fresh founded National Green Juice Day in 2016 as a way to empower people to press ahead with their wellness resolutions by drinking a green juice.

*Survey was conducted by Wakefield Research on behalf of Evolution Fresh among 1,001 American adults age 18+ using an email invitation and online survey in December 2015.

The Registrar at National Day Calendar declared the day to be celebrated on the 26th of January, annually.

Q. Is green juice always green?
A. When you blend vegetable juice with other ingredients the green color tends to dominate. However, with the right combinations, the flavor is spot on!

Q. Can green juice be made into a smoothie?
A. It sure can. Use frozen bananas or other frozen ingredients to give it a refreshing, blended taste.

January 26th Celebrated (and Not So Celebrated) History

In a letter dated January 26, 1784, Benjamin Franklin writes to his daughter Sarah (Sally) Bache expressing his dismay that the eagle is chosen as an American symbol. Were he to choose, the turkey would be a more appropriate bird.

Frederick Wells discovers the world’s largest diamond at the Premier Mine in Pretoria, South Africa. Measuring 3,106 carats, the gem is named the Cullinan diamond.

January 26th Celebrated (and Not So Celebrated) Birthdays

As the 19th First Lady of the United States, Julia Grant was noted for opening the White House to the public on Tuesdays. Following Ulysses S. Grant’s presidency, the couple toured the world.

During World War II, the U.S. general commanded the Southwest Pacific Theatre and led the Allied occupation of Japan.

In pursuit of becoming a pilot, Coleman traveled to France after being denied the opportunity in the United States. In France, she learned to fly, returning to the United States as the first female African American and Native American pilot.

In 1949, the stepmother of the seven von Trapp children wrote her memoir The Story of the Trapp Family Singers. It inspired the musical The Sound of Music and the film starring Julie Andrews.

In the award-winning actor’s five decades of performances, he has recorded some unforgettable roles. Some of those include Brick in Cat on a Hot Tin Roof, Butch Cassidy in Butch Cassidy and the Sundance Kid, and Eddie in The Color of Money.

In 1972, the singer-songwriter co-founded the rock band, Van Halen. Some of their best-known songs include “Jump,” “Panama,” and “Dance the Night Away.”

The host of the self-named talk show, DeGeneres, began earning comedy creditability in clubs in the 1980s before landing her own sitcom. Her Emmy-winning daytime talk show began in 2003.