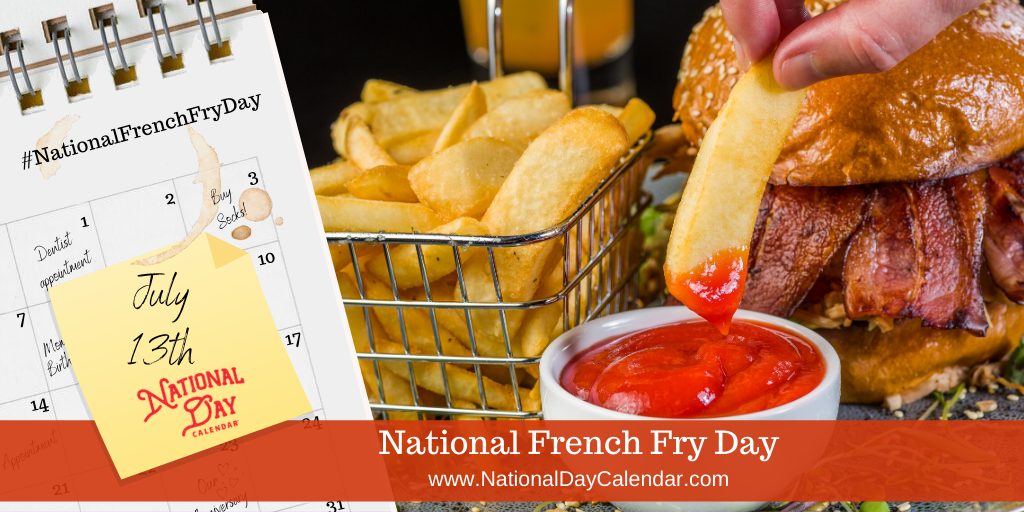 National French Fry Day on July 13th recognizes a staple food on menus across the country. It comes in so many different cuts and styles, there’s a favorite for everyone to enjoy!

French fries, also known as chips, fries, finger chips, or French-fried potatoes, are batons of deep-fried potatoes. No matter what we call them, they’re common fixtures at fast-food restaurants and are loved by all ages!

A wide selection of condiments such as ketchup, ranch dressing, vinegar, mayonnaise, honey mustard, cheese, and many more complement French fries. As a healthier alternative, sweet potatoes also make delicious fries and accompany many dishes on menus around the country. Other varieties are baked and come in unusual shapes such as curls, waffles, crinkle, or tornado cut.

Beyond the condiments, chefs and home cooks sprinkle seasonings to add flavor and spice to their fries. Whether you add a little garlic and onion powder or spice it up cajun style, a potato crisped just right will satisfy a combination of tastes. We top them with chili or nacho cheese and jalapeños, too. Depending on the type of fries, we might top them with even more ingredients and call them all sorts of things.

The expression “French Fried Potatoes” first occurs in print in English in the 1856 work Cookery for Maids of All Work by E. Warren.

It is believed by some that the term “French” was introduced to the potatoes when the American soldiers arrived in Belgium during World War I and consequently tasted Belgian fries. Since French was the official language of the Belgian Army at that time, it is possible the American soldiers began calling the fried potatoes “French” fries.

WHAT DO YOU THINK?

Checkers and Rally’s fast food restaurants is on a mission to petition National Day Calendar to change the date of National French Fry Day. Currently, the day is celebrated on July 13 each year. They want to change the date to the 2nd Friday in July. The day would become known as National FryDay. Under advisement of Cal our Calendar Mascot, we decided to let them try to fry our brains with an attempt to change the day.

They need a lot of people to sign their petition to convince Marlo Anderson and National Day Calendar that National Fryday deserves to always be on a Friday. You can help them in their quest by signing their petition at National FryDay You’ll get some FREE fries* for your efforts.

Enjoy some French fries. Share them seasoned or dipped. Order them cut and shaped how you like them! And do we have deals for the day or what? Check out the Celebration Deals page to find French Fry deals near you!  Do you have a deal to add to the list? Contact us and we will get it added! Post on social media using #NationalFrenchFryDay.

We were unable to find the creator or origin of National French Fry Day.

July 13th Celebrated (and Not So Celebrated) History

The U.S. Patented Office issued patent No. 586,193 to Guglielmo Marconi for a wireless telegraph.

Raising $127 million for Ethiopian famine relief, the Live Aid concert included more than 75 acts on two stages – one at Wembley Stadium in London and the other at JFK Stadium in Philadelphia.

July 13th Celebrated (and Not So Celebrated) Birthdays

June Etta Downey spent her career as a psychologist studying personalities and handwriting. Her research led to some of the development of the Downey Individual Will-Temperament Test, an early personality inventories.

In 1935, Lewis partnered with Florino del Gaizo to produce American-grown Italian tomatoes for canning. They launched the company Flotill Products Inc. The company would go on to produce a variety of other fruits and vegetables, too.

Known for his roles as Han Solo in the Star Wars saga and the adventurous but snake-dreading professor in the Indiana Jones series. Ford’s career took off in 1973 in a film called American Graffiti.

A Hungarian mathematician, Rubik invented the colored and challenging puzzle named the Rubik’s Cube in 1974.