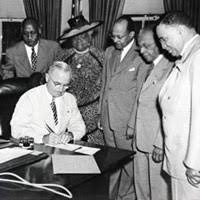 National Freedom Day, always observed on February 1st, celebrates freedom from slavery. It also recognizes that America is a symbol of liberty. The day honors the signing by Abraham Lincoln of a joint House and Senate resolution that later became the 13th Amendment to the U.S. Constitution. President Lincoln signed the Amendment outlawing slavery on February 1, 1865. It was not ratified by the states, however, until later on December 18, 1865.

“Neither slavery nor involuntary servitude, except as a punishment for crime whereof the party shall have been duly convicted, shall exist within the United States, or any place subject to their jurisdiction.” ~ 13th Amendment

A former slave by the name of Major Richard Robert Wright, Sr. created National Freedom Day. Major Wright was looked upon as a great leader in the community. It was believed by Major Wright, that this day needed to be celebrated.

February 1st holds significance because that was the date Abraham Lincoln signed the 13th Amendment outlawing slavery in 1865. On June 30, 1948, President Harry Truman signed a bill proclaiming February 1st as the first official National Freedom Day in the United States.

The Philological Society of London and Oxford University Press publishes the first volume of the Oxford English Dictionary. A-Ant consisted of 352 pages and took 5 years to complete. Scotchman James Murray undertook the enormous task as the primary editor. He would die in 1915 before the project was complete.

Hewlett-Packard introduced the first scientific hand-held calculator. It sold for $395 and was named the HP-35 – a nod to its 35 keys.

In 1932, Caraway became the first woman elected to the Senate. She had been appointed the previous year to fill her husband’s seat due to his death.

The American film director was most noted for his westerns starring John Wayne. He also adapted the John Steinbeck novel, Grapes of Wrath.

One of Hollywood’s foremost leading men during the first half of the 20th century, Gable was known for films like Gone with the Wind, It Happened One Night, and The Misfits.

The American poet of the Harlem Renaissance, Langston Hughes also wrote several plays, novels, and essays. He’s most known for his poem “Harlem.”

For five decades the street photographer captured the world and then hid it away. Not until after her death was her historic collection revealed to the world.