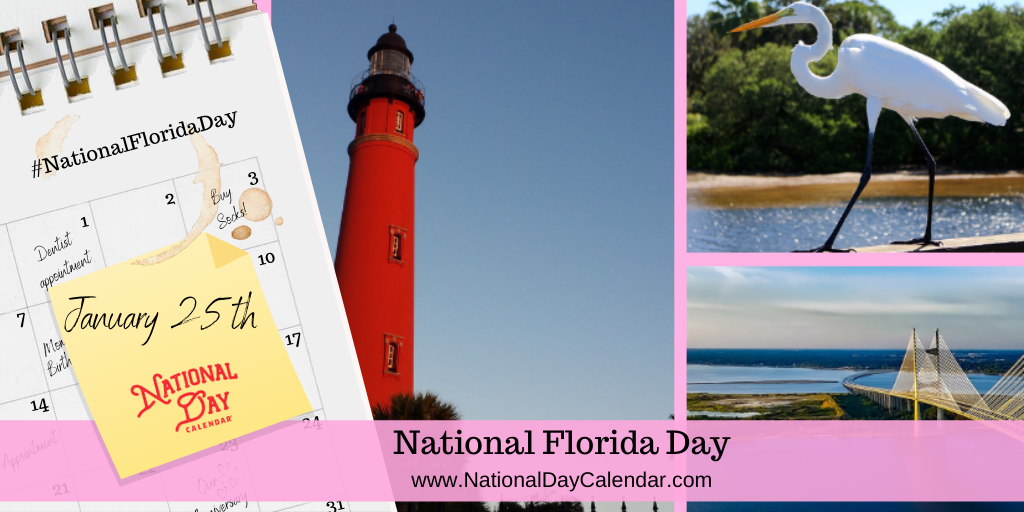 The Sunshine State is home to the oldest established city in the country. With over 400 years of history, St. Augustine’s streets and colonial architecture have stories to tell. Founded by Spanish explorers in 1565, visit the city and walk in the same footsteps as 16th-century bishops, ponder the escapades of pirates and the whereabouts of lost gold and learn about the lives of European settlers.

The present-day borders of Florida were absorbed through two transactions: The Louisianna Purchase in 1803 brought East Florida with it (but not without dispute from the French) and through a U.S. intervention in an uprising in West Florida in 1812 causing West Florida to join the Mississippi Territory. Florida joined the Union on March 3, 1845.

With an average high temperature of 79.5°F, it should be no surprise that Floridian John Gorrie brought refrigeration and air conditioning to the world in 1851. Add to that, more than half the year with partly cloudy to sunny days, the invention of sunblock would be a necessity, too. Hungary born pharmacist, Benjamin Green, invented a sunscreen in 1944 which later became a tanning lotion known as Coppertone.

Cape Canaveral and the home of the Kennedy Space Center in Brevard County has come a long way from its first launch in 1950. From Appollo missions to Hubble Telescopes and Mars Rovers, Cape Canaveral continues missions well into the future. Missions include commercial ventures including SpaceX launches.

Florida offers more than enough to do and see. From man-made worlds and relaxing beaches to long, colorful and intricate history, the Sunshine State’s open spaces and sunny faces require more than one visit.

For a complete list of Florida State and National Parks & Historic Sites visit www.floridastateparks.org and www.nps.gov.  Check out a few of the featured sites around the state below. A civil rights activist and composer, James Weldon Johnson became United States consul to Puerto Cabello in Venezuela under President Theodore Roosevelt. He is also noted for composing the song Lift Every Voice and Sing.
Founder of the first African-American union, the Brotherhood of Sleeping Car Porters, A. Philip Randolph was considered a trailblazing union leader and social activist.
A sculptor of considerable talent, Augusta Savage built a career sculpting busts of notable African Americans. In 1939, she earned a commission for the New York World’s Fair. Her piece, The Harp, depicted men, women, and children forming a harp in the arm of God. Inspired by James Weldon Johnson’s composition Lift Every Voice and Sing, the piece was destroyed along with all the other commissioned pieces for the fair as there were no funds to cast the works.
Strange Fruit (1944) and Killers of the Dream (1949) placed Lillian Smith’s stance on civil rights squarely in the public eye, right where she wanted it to be. Throughout Smith’s life, she continued to dedicate her writing to the Civil Rights Movement.
Jacqueline Cochran was the first woman pilot to break the sound barrier.
The career of award-winning rock and roller, Tom Petty, spanned four decades, several bands and successful solo albums. Notable solo hits like “Free Fallin'” and “Runnin’ Down a Dream” were backed by Traveling Wilburys bandmates Bob Dylan, Roy Orbison, Jeff Lynne and George Harrison.
The first woman to serve as the United States Attorney General, Janet Reno was appointed to the office in 1993 by President William Clinton. She served until 2001.
Betty Mae Tiger Jumper devoted her entire career to public service. As a nurse, she worked to improve the health and conditions in the Seminole community. In 1967, Tiger Jumper was elected the first woman tribal leader of the Florida Seminoles and the first woman to lead a federally recognized tribe. In 1971, she left office to carry on the publishing of the Seminole Tribune which Tiger Jumper launched in 1950.

Sidney Poitier began his acting career on stage filling in for Harry Belafonte. Making his way to Hollywood, Poitier became the first African American to earn an Academy Award for his role in Lilies of the Field.

As part of Project Excelsior in 1960, Joseph Kittinger leaped from a balloon gondola at the far reaches of Earth’s atmosphere. Breaking world records that still stand today for the highest parachute jump and a freefall that lasted 4 minutes and 36 seconds, Captain Kittinger’s feats proved multistage survival possible at various altitudes and under certain conditions. With advancing technologies in aviation, these experiments helped to provide valuable data.
Winner of the Nobel Prize in physics in 2006, George Smoot is an experimental astrophysicist. Smoot led the team that mapped the early universe.