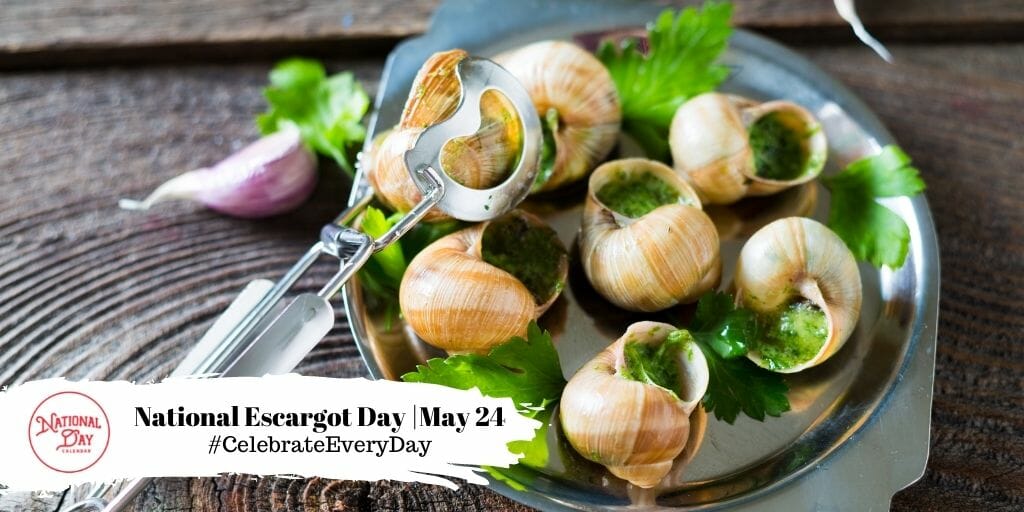 Each year on May 24th, National Escargot Day honors the famous French dish of cooked land snails. While escargot is enjoyed by many it is an acquired taste. Many French restaurants serve the dish as an appetizer.

Escargot {es.kar.go} is the French word for snail.

Cooks usually prepare Escargo by removing the land snails from their shells, cooking them with garlic, butter, and wine. Once cooked, the gastropods go back into their shells with the sauce for serving. Because the snails are clumsy to eat, special forks and tongs help improve the dining experience.

Escargot are high in protein and low in fat (without the butter).

The science of growing snails is known as heliciculture. In the United States, more people are raising snails for culinary purposes. Even though escargot still seems exotic to American palates, around the world escargot has long been a popular dish.

HOW TO OBSERVE National Escargot Day

If you’ve never experienced escargot, this is the holiday to try it. Find a restaurant near you that serves the delicacy and order a plate. Be sure to order wine, too. If you’re looking for a recipe to try at home, we have a recipe for you to try as well.

Enjoy this Escargot in Wine recipe.

If you’re food adventurous, read 9 Odd Foods That Are An Acquired Taste.  #NationalEscargotDay to post on social media.

National Day Calendar continues researching the origins of this French dining holiday. We suspect the founder is dining on a bed on snails.

May 24th Celebrated (and Not So Celebrated) History

The U.S. Patent Office issued the first patent for a coin-operated parking meter. Oklahoman Carl Magee received patent no. 2,118,318 for his invention and initially trademarked it as the “Dual.” However, Magee would later rename the invention the “Park-O-Meter.” Oklahoma City installs the first units in July 1935.

Astronaut Scott Carpenter flew aboard the Aurora 7 and became the second American to orbit the Earth.

Paul McCartney performs live in Russia for the first time. The Red Square concert hosted an audience of 20,000.

May 24th Celebrated (and Not So Celebrated) Birthdays

The monarch of Great Britain and Ireland served for 64 years. Only her great-granddaughter, Queen Elizabeth II has ruled longer. She was also the first person diagnosed with hemophilia, a blood disorder that is also called the Royal Disease.

In the 1930s, the American physician helped establish pediatric cardiology at the Harriet Lane Home in Baltimore. Now called the Harriet Lane Clinic, the home was the first of its kind, providing care solely for children.

The Canadian-American actor, comedian, and musician is best known for pairing up with Cheech Marin for cannabis-filled humor in films like Cheech & Chong’s Up in Smoke, Cheech and Chong’s Next Movie and Cheech & Chong’s Hey Watch This.

Since the early 1960s, Bob Dylan’s unique style of folk music has gained respect and influenced artists across genres. The eleven-time Grammy-winning artist earned the Nobel Prize in Literature in 2016.

For nearly 60 years the iconic and award-winning singer/songwriter has been writing, performing and creating hits like “Forever Young” and “Lady Marmalade.”

The Grammy-winning country music singer/songwriter rose in popularity during the 1980s.