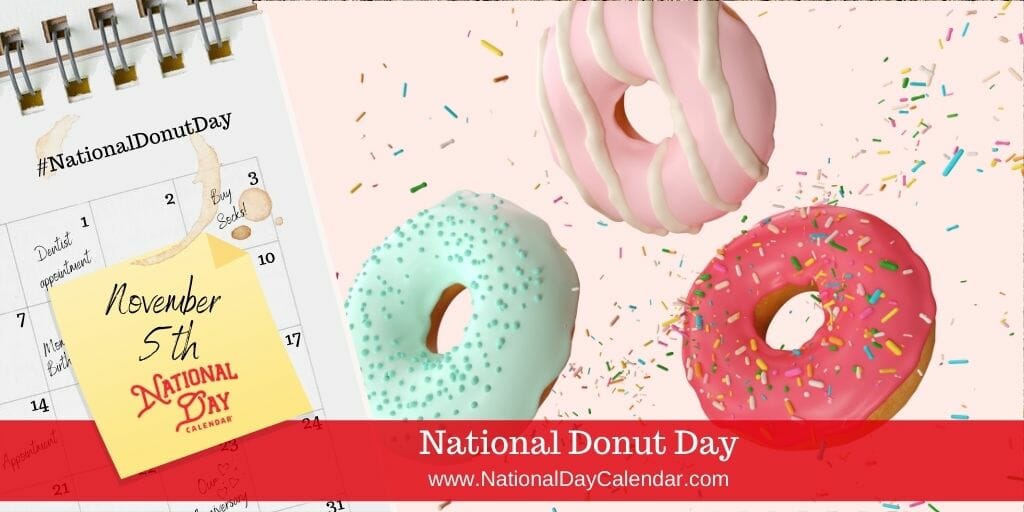 National Donut Day (also known as National Doughnut Day) on November 5th is one of two observed by donut lovers across the nation. The first Friday in June is the other day donuts steal the bakery case spotlight ready to tease their way into white bakery box and go home!

Visit the June page for more information on the other National Doughnut Day celebration.

History disputes the origin of the donut. One theory suggests Dutch settlers brought donuts to North America much like they brought other traditional American desserts. They receive credit for such desserts as the apple pie, cream pie and cobbler.

Donut shapes are as varied as their history. Was the original donut round? If so, American Hanson Gregory laid claim to inventing the ring-shaped donut in 1847 while working onboard a lime-trading ship. Only 16 at the time, Gregory claims he punched a hole in the center of dough with the ship’s tin pepper box. Later, he taught the technique to his mother.

Traveling further back in time, we look at an English cookbook. According to anthropologist Paul R. Mullins, an 1803 volume included donuts in the appendix of American recipes. However, the earliest recorded usage of the term donut is found in a short story in a Boston Times article about “fire-cakes and dough-nuts” published in 1808.

A more commonly cited first written recording of the word is Washington Irving’s reference to donuts in 1809 in his History of New York. He described balls of sweetened dough, fried in hog’s fat. The author called them donuts. Today, these nuts of fried dough are called donut holes.

Another author, William Cullen Bryant describes donuts fried in lard in his book Picturesque America; Or, the Land We Live In which was published in 1872.

The more traditional spelling is doughnut. However, both doughnut and donut are pervasive in American English.

Donuts come in a large variety of recipes, flavors and toppings. However, just like many pastries, we are only limited by imagination and the ingredients at hand. From syrups and jellies to sprinkles and custards, top them, fill them, bake them or fry them. Donuts have a mouth-watering way of glazing and dusting their way into our shopping carts. They also slip into the break room at work to share.

HOW TO OBSERVE #NationalDonutDay

Stop at your favorite donut shop and indulge in a fresh donut or try making your own with one of the following recipes:

Q. Do all donuts have yeast in them?
A. No. There are different types of donuts: yeast donuts, French crullers and cake donuts. Only the yeast donuts contain yeast.

Q. How many donut days are there?
A. We love our donuts so much that there are two donut days on the calendar. The other is in June.

November 5th Celebrated (And Not So Celebrated) History

Susan B. Anthony along with fourteen other women presented themselves for voter registration in Rochester, NY. After being permitted to register, they cast their ballots. Several days later, United States Commissioner William Storrs issued a warrant for their arrest.

George B. Selden receives the first U.S. patent for an automobile. Even though he never built a car, he collected royalties from car manufacturers for years.

Sinclair Lewis, the author of Arrowsmith, Mainstreet, and Babbitt, became the first U.S. writer to earn the Nobel Prize in Literature.

The voters of the United States elect Franklin D. Roosevelt to a third term for the first and only time in United States history.

November 5th Celebrated (And Not So Celebrated) Birthdays

The investigative journalist wrote a series of articles named The History of the Standard Oil Company and earned a name for her type of journalism – muckraking. However, the article exposed the unfair business practices of monopolies. She would later pursue advanced education at the Sorbonne and write several biographies.

In 1899, the industrialist co-founded the Packard Motor Car Company in Warren, OH. He remained the company’s president until 1909. In 1956, the last Packard rolled off the assembly line.

A colonel in the Civil Air Patrol, Bryan has logged more flying hours than any other woman in the world. In 1945, she earned her private pilot’s license, but that was only the beginning. Bryan would go on to earn her commercial license, become a flight instructor, and run her own flying service.

The actor and singer appeared in more than 100 westerns, usually as himself.

In 2005, Pace became the first Marine to serve as the Chairman of the Joint Chiefs of Staff. His already long career now encompassed increased efforts to overcome terrorism and weapons of mass destruction. He served two years in the position and retired from active duty after 40 years of military service.

The award-winning Canadian musician rose to fame in the early 1980s. His first taste of success came with his album Cuts Like A Knife.

The actress won her first award at the age of 10 for her role as Addie Loggins in the film Paper Moon.