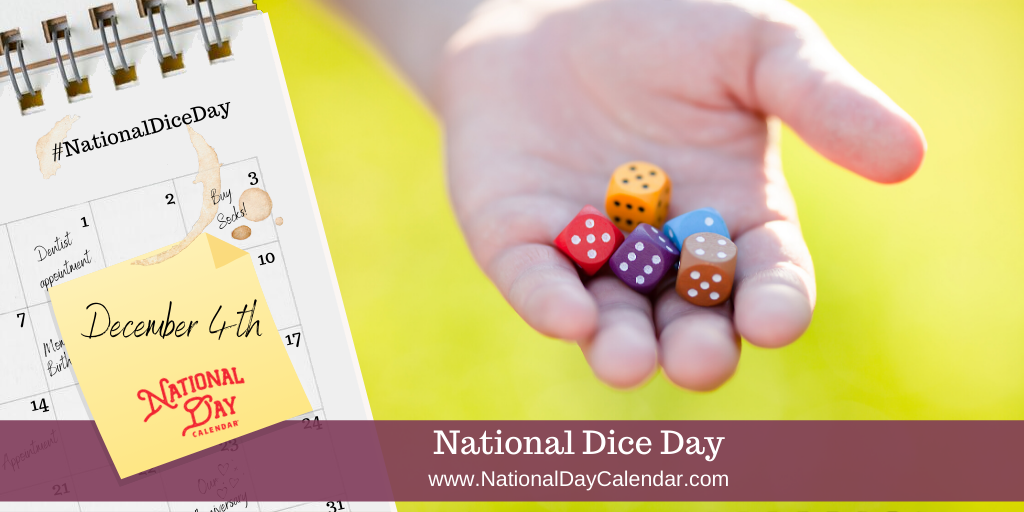 Each year on December 4th, National Dice Day recognizes an ancient gaming tool. Many games incorporate dice as a way to add random challenges or obstacles to the objectives. It’s time to roll the dice and see where you land!

Players typically throw dice onto a flat surface from their hands or a cup. The uppermost face of the die after it comes to rest determines the value of the throw. One popular dice game is craps where wagers are made on the total value of the throw of the dice. Frequently used in board games, players use dice to randomize their moves, commonly by deciding the distance a piece will move on a board. Favorite board games using dice include backgammon and Monopoly.

The origin of dice is uncertain. However, it is known that they have been around for thousands of years.  At the Burnt City, an archaeological site in south-eastern Iran, archaeologists unearthed the oldest known dice as part of a 5000-year-old backgammon set.

Players originally made dice from the talus (ankle bone) of hoofed animals. They also used ivory, wood, and plastics in making dice. Dice also come in many shapes and colors.

Play a game using dice. Or hang those fuzzy dice on the rear-view mirror. If you have two dies, you might be in pair o’ dice. Use #NationalDiceDay to post on social media.

Q. What does “no dice” mean?
A. The phrase “no dice” originally comes from gaming. A dealer or competitor will sometimes say, “No dice,” when the roll doesn’t land the way they wanted. Today it can mean to deny permission or reject a request. If you ask your parents for a new phone, they might say, “No dice.”

Q. How many sides are on a typical die?
A. There are 6 sides to a typical die. However, there are many different kinds of dice.

Q. What are the dots on a die called?
A. The dots on a die are called “pips”. Each pip or combination of pips represents a number. Pips can also be found on golf balls, dominoes,

December 4th Celebrated (And Not So Celebrated) History

The National Grange of the Order of Patrons of Husbandry, The Grange for short, was established following the Civil War to bring organized and cooperative farming to a national level. Seven men and one woman founded the first fraternal organization in New York and further memberships opened across the country.

Nathan Cole Jr. and Thomas Gardiner published the first edition of the Los Angeles Daily Times, known today as the Los Angeles Times. By 1882, Harrison Gray Ottis would take over the editing of the paper.

President Woodrow Wilson becomes the first US president to travel to Europe while in office as he sails to for the World War I peace talks in Versailles.

Space shuttle Endeavor with a crew of six launched from Kennedy Space Center on the first mission to begin assembling the International Space Station.

December 4th Celebrated (And Not So Celebrated) Birthdays

In 1891, the American businessman founded the Geo. A. Hormel & Co. in Austin, MN. His understanding of the meatpacking industry led to innovations that served the Hormel company well.

During World War I, the British nurse served in German-occupied Belgium. She provided care to both Belgian and German soldiers during the occupation. German authorities later arrested Cavell, accusing her of aiding British and French POWs to escape. Cavell admitted to the charges and was found guilty. The Germans executed Cavell on October 13, 1915.

In 1973, Manford created the support network now known as PFLAG to support her son Morty Manford and gay rights efforts.