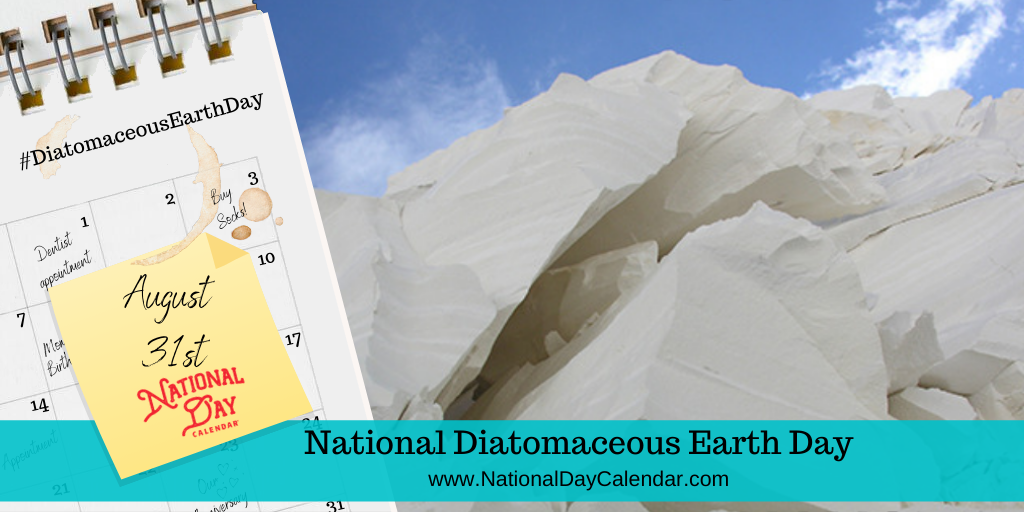 On August 31st, National Diatomaceous Earth Day recognizes the diatom and the remarkable mineral it creates.

Most people know of diatomaceous earth because they use it around their homes. Sometimes they use it as a filter for swimming pools or as a natural insecticide. Biologists understand diatoms, single-celled plants. They form diatomaceous earth and are indeed the lungs of the earth. Amazingly, diatoms produce about ¾ of the world’s new oxygen supply. Another scientist known as materials scientists recognizes diatom skeletons (called frustules). Imagine tiny, intricate porous opal structures. They are known to be the most durable naturally occurring substances in the world.

When diatoms die and fall to the bottom of bodies of water, DE deposits form. Over time, the organic portions of the diatoms weather away. The remaining opal frustules form diatomaceous earth. Some of the largest deposits in the U.S. formed in ancient lakes in California, Nevada, Oregon, and Washington. They also formed in oceans and occur along the coasts of North and South America.

Around 1836, Peter Kasten discovered DE in Germany. At the time, he noted some of DE’s amazing qualities. Its astonishing ability to absorb, filtrate, polish, and stabilize makes DE desirable in numerous industries. Long before Kasten’s discovery, though, the world was using diatomaceous earth. Ancient Greeks used it as an abrasive as well as a building material in lightweight bricks. Even in pre-historic times, diatomite was used in the ice-age cave paintings in France.

Today, DE is one of the most useful and durable substances known. DE sees nearly universal use in the filtration of liquids. For example, DE filters the beer and wine we drink. It also filters the water in swimming pools. DE refines chemicals for food and medications. Another DE use is in paint; it removes the sheen making flat paint flat. In plastics, DE prevents blocking in plastic film. Additionally, when oil spills, recovery specialists often turn to DE to absorb the oil.

And there are hundreds of other applications for DE with many more yet to be discovered!

Explore the uses of Diatomaceous Earth. Where do you think it might be used around your home or work? Discover more about diatomaceous earth and use #DiatomaceousEarthDay to share on social media.