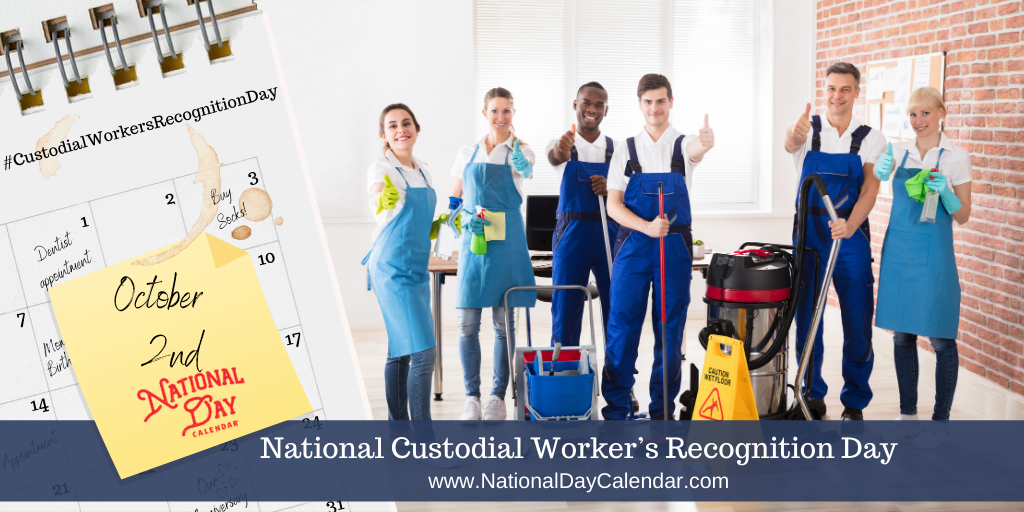 On October 2nd, National Custodial Worker’s Recognition Day encourages appreciation to the employees who keep our schools and workplaces across the nation running smoothly.

Custodial workers operate behind the scenes. They are often under-appreciated for the hard work they do day after day, too. These are the personnel keeping schools, hospitals, office buildings, museums, churches, and other buildings clean and well maintained.

While delivering outstanding services and running a well-maintained building, they contribute to critical first impressions and the success of any business. They’re the people we call on to give our brick and mortar businesses a polished look. The bank, schools, and office buildings look organized and presentable because custodial workers efficiently keep everything in top condition.

Additionally, their skill saves businesses and organizations money. Well-maintained carpets and surfaces last longer. Seasonal updates and maintenance help buildings to run more efficiently, too. Custodial workers make sure buildings are ready for each season and running correctly. As a result, the buildings are safer and healthier for those entering them. They also free-up time for the rest of the organization to focus on growing a business, teaching students, or caring for others.

The work is physically demanding. Depending on the position, custodial workers may work varying shifts and possibly in several locations. They may be part of a team or work independently. No matter where they work, this day recognizes their dedication and hard work.

If you know a custodial worker, THANK THEM today! Use #CustodialWorkersRecognitionDay to post on social media.

And we can all do out part to help them do their jobs too. We can be clean ourselves by keeping work stations neat. After a break, pick up after ourselves in the lunch/break room. We can even do some light dusting around our desks, office or cubicle. There is no reason to leave a mess for anyone else when we can simply do our part to help.

October 2nd Celebrated (And Not So Celebrated) History

J. Osterhoudt receives patent No. 5,8554 for a method of opening tin cans with a key. His design includes a lip for a key to turn the lid back.

In the Jules Vern novel Around the World in Eighty Days, Phileas Fogg sets out on his journey around the world.

Thurgood Marshall takes the oath from Chief Justice Earl Warren. The attorney and civil rights activist was the first African American Supreme Court Justice. He served until 1991. One of Marshall’s career highlights was the Supreme Court case Brown v. Board of Education of Topeka.

Canadian Lennox Lewis takes gold in the super heavyweight bout at the Seoul Olympics. He TKOs American Riddick Bowe in the 2nd round.

October 2nd Celebrated (And Not So Celebrated) Birthdays

Working professionally as a writer, Adams compiled early U.S. history and the study of religion. She was the first woman in the U.S. to earn a living as a writer.

Born into slavery, Turner organized and launched a two-day campaign that ended with the deaths of whites and slaves alike. Turner was hanged after eluding militia for six weeks.

The social activist became the leader of the nationalist movement in India. Known for his non-violent resistance, in 1894 his labors for his country began when the Natal Legislative Assembly began considering a bill that would remove the right to vote from Indians. Gandhi’s efforts would take years and in 1947 the Indian Independence Bill created two independent nations: India and Pakistan. Only a few months later, Nathuram Godse assassinated the peaceful social activist.

The first director of the United States Marine Corps Women’s Reserve also became the first woman to attain the rank of major in the Marine Corps. By the time she retired in 1945, she had achieved the rank of lieutenant colonel.

As the creator of the CoCo the Clown, Poliakoff gained fame in the UK and later the US. After immigrating to the UK from Russia, Poliakoff perfected is auguste clowning style with the Bertram Mills Circus.

The right-handed pitcher played six seasons in the All American Girls Professional Baseball League. During her baseball career, she traveled all over North and South America playing exhibition games. When her baseball career ended, Stephens worked for the Great Lakes Naval Training Center in Chicago, IL.

The first African American astronaut served as an instructor with the Manned Orbiting Laboratory. However, Lawrence would perish during a training flight for the Space Shuttle program before ever being given the opportunity to fly in space.

During the O.J. Simpson murder trial, the attorney made the phrase “if it doesn’t fit, you must acquit,” famous.

The photographer is best known for her stunning portraits of celebrities.

After co-founding Orange County Choppers with his father, Teutul Jr. co-starred in the reality show American Chopper on the Discovery Channel and TLC for 8 seasons.